Perhaps no other award says as much about a player as an end-of-season MVP selection.

Only a player that has stood out beyond the achievements of their team, and beyond the expectations of an individual player, would be chosen from a league-wide panel of technical staff to represent the best of the best.

In 2018, two League1 Ontario players had their MVP tickets punched by nearly all voters. In votes, they ended up head and shoulders above the competition. 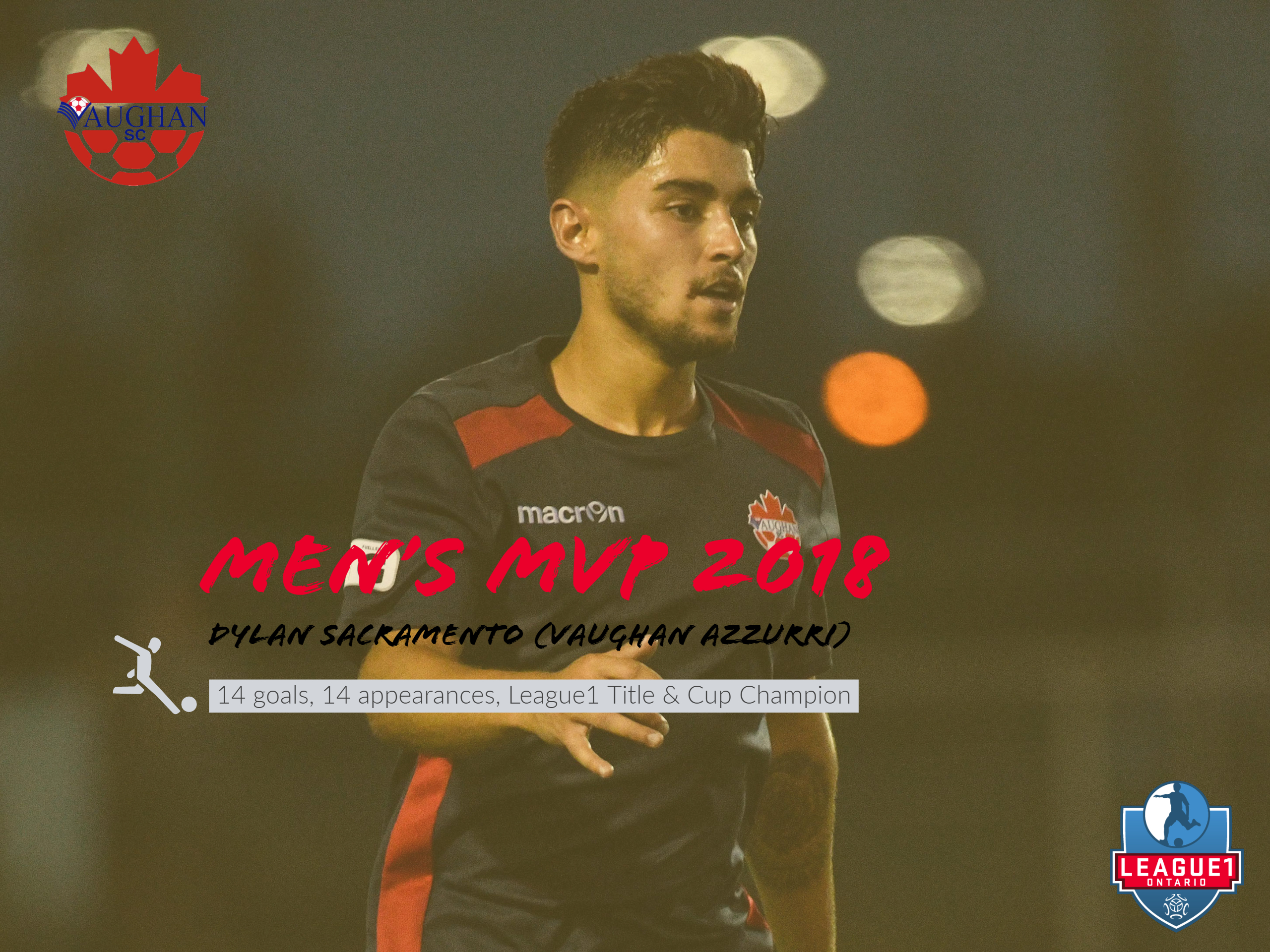 When Dylan Sacramento won the 2018 title as a member of the Vaughan Azzurri, nobody was really that surprised.

After all, he had already done it once before.

Sacramento first came on the League1 Ontario scene in the inaugural season of the league, winning that first Championship Final with the erstwhile named Toronto FC Academy in 2014. In fact, Sacramento made his mark that season from his first good kick; he scored the opening goal of the 2014 campaign and thus, the first goal in League1 history.

After spending his collegiate career in the NCAA Atlantic Sun conference with Florida Gulf Coast, Sacramento returned to League1 in 2018 and promptly helped Vaughan to a second title in their history.

An out-and-out number 10, Sacramento pulled the strings on the Vaughan attack all season, running at the opponent's defensive lines in the mode of a classic attacking mid, or bending in Olympico goals from the corner as he did against his alma mater, TFC III.

His left-footed bending strike in the the 2018 Championship Final opened the scoring and put the first nail in the coffin for the opponent, Woodbridge Strikers, but it was just more of the same from a player that had been clutch whenever the Azzurri needed him in 2018.

Sacramento led the team with ten goals in 11 appearances. He went on to dominate the playoffs with four goals in three appearances.

A name to watch in the future on the pro circuit - Congratulations Dylan Sacramento and Vaughan Azzurri on your 2018 League1 Ontario Men's MVP Award! 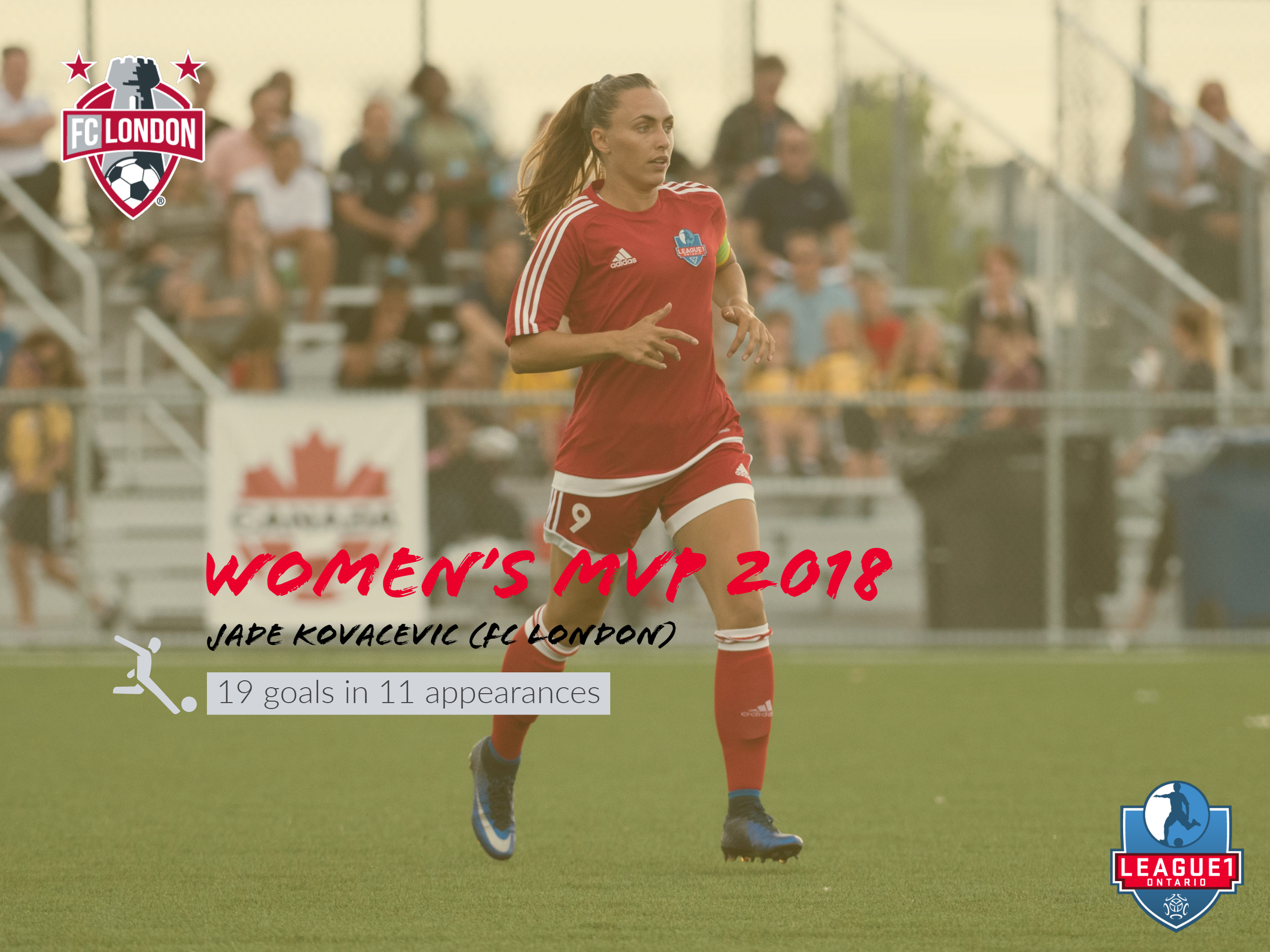 After three seasons in the league, we are officially running out of superlatives to describe the play of FC London forward, Jade Kovacevic.

2016, 2017, 2018 - each year Kovacevic has wrapped up the Golden Boot and MVP awards for the women's division, and there hasn't even been a murmur of dissenting opinion.

We could tell you how Kovacevic has now scored 93 cumulative goals in Cup and League competitions in her League1 years and is the all-time league-leading scorer in either men's or women's divisions.

We could mention how the forward has only been kept off the scoreboard in nine matches... in three years.

Or how she has played more minutes than any other player in the FC London team, has led them to three consecutive regular season titles, or - once again - is up for Goal Of The Year.

There is no point in mentioning how she won the 2018 Canadian College Athletic Association (CCAA) Player Of The Year or how she had a short stint with the Canadian Women's National Team years ago because neither of these accomplishments has anything to do with her 2018 League1 Ontario MVP Award, of course.

Instead we'd like to make a humble plea from everyone at League1 - would Canada Soccer please take another look at this player already!? She's won everything we have here, it's really high time to see what she can do on the international stage.