Sigma FC defeated Oakville Blue Devils 3-2 in the final Group B match for the two sides on Sunday, with the Mississauga academy coming back from two goals down to put the 2017 champions out of contention for a berth in the 2018 final.

An early substitution from Oakville in the third minute saw Khody Ellis replace Devin Heathcote, adding to Oakville's attack power as Ellis managed to move the ball up and now the left wing - setting up two attempts for Oakville in the first half.

Oakville was able to capitalize on this period of dominance, opening the scoring as Anthony Novak (26') received a cross from Ellis in front of the box; Novak turned and booted the ball past Sigma's Triston Henry.

Hitesh Joshi (28') extended the lead just minutes later after Rajvir Khalon whipped in a corner and Joshi got his head on it, flicking the ball low and beyond Henry's outstretched right hand.

Novak came close to marking it 3-0 for Oakville in the 38th minute, tilting back to hit a highlight reel bicycle kick to the top right corner of the net. Incredibly, Henry managed to reach the ball and push it over the cross bar with his fingertips.

Just before the half-time, tensions boiled over as Oakville was forced to play a man down after right back Carlo Difeo was controversially dismissed for violent conduct.

Still, Oakville maintained their 2-0 lead going into half-time and knew that if they could maintain the scoreline they would have a great chance of finishing the day in first place in Group B, booking a spot in the Championship Final. 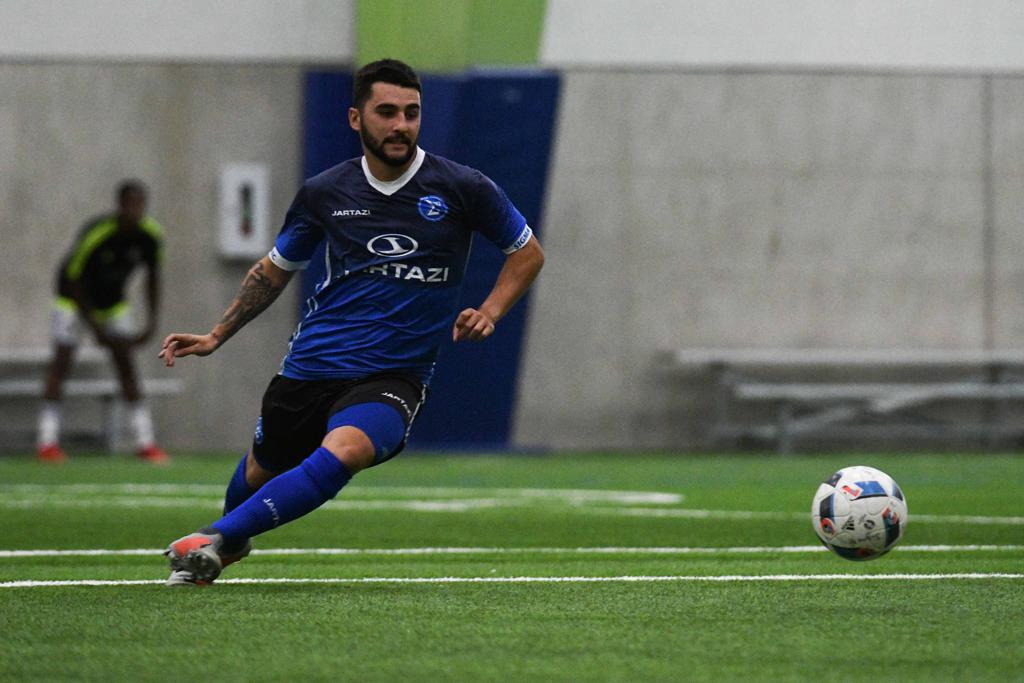 But the second half began with the hosts taking control, Tristan Borges (56') managing to get his left foot on a loose ball inside the area and placing it into the bottom left corner. Sigma had the push they needed to get back in the game.

Despite playing a man down, Oakville managed to sustain their presence on the pitch as if they had an 11 man squad on the field.

Despite Oakville's resilience and attacking power though, Sigma's Thomas (88') was still able to sneak one past the back-line to level the score with a deflected shot from distance.

The tension was finally broken in extra time when Borges (90'+ 2') scored his second of the day, bending a left-footed finish around Oakville keeper Birstingl after receiving a great through ball from Charlie Anagho-Ntamark.

Pandemonium ensued among the home support in front of a packed house at the Paramount Fine Foods Centre in Mississauga at the final whistle.

However, although Sigma would take the result in exciting fashion, both teams crashed out of the League1 Championship Final contention as elsewhere Woodbridge Strikers would win their final match and ultimately the Group B title.

Click here to catch up on all the news, stats, photos, video and more from Oakville Blue Devils' 2018 season.

Click here to catch up on all the news, stats, photos, video and more from Sigma FC's 2018 season.

Woodbridge Strikers will now move on to face Vaughan Azzurri in the 2018 League1 Ontario Championship Final on October 20 (3 p.m.) at the Ontario Soccer Centre, Vaughan.