Nuno Carvalho’s (90+5') header ties the match up in the dying seconds of the game as the Oakville Blue Devils tie visitors Woodbridge Strikers 2-2 in second round playoff action.

The last time these two teams met, a late match equalizer for Woodbridge resulted in a 1-1 tie at Oakville’s home field. This time, it would be Oakville who made the late equalizer on their home turf.

The majority of the first half was played with equal possession in the middle third of the pitch. Both teams struggled with the wet turf as neither were quite able to put anything on target to test the goalkeepers.

Oakville managed to get five shots off in total throughout the first half with only two being on target. On the other end, Woodbridge got four shots off with one hitting the target.

As the second half rolled around, the match picked up in the last thirty minutes of play as tensions ran high.

Woodbridge’s Emmanuel Issac (72’) broke the stalemate late in the match when his low shot outside the box hit just inside the left post and in.

Woodbridge went on a counter attack minutes later, as a defensive mistake from Oakville allowed Jose De Sousa (79’) to slot one home to put his team up 2-0. 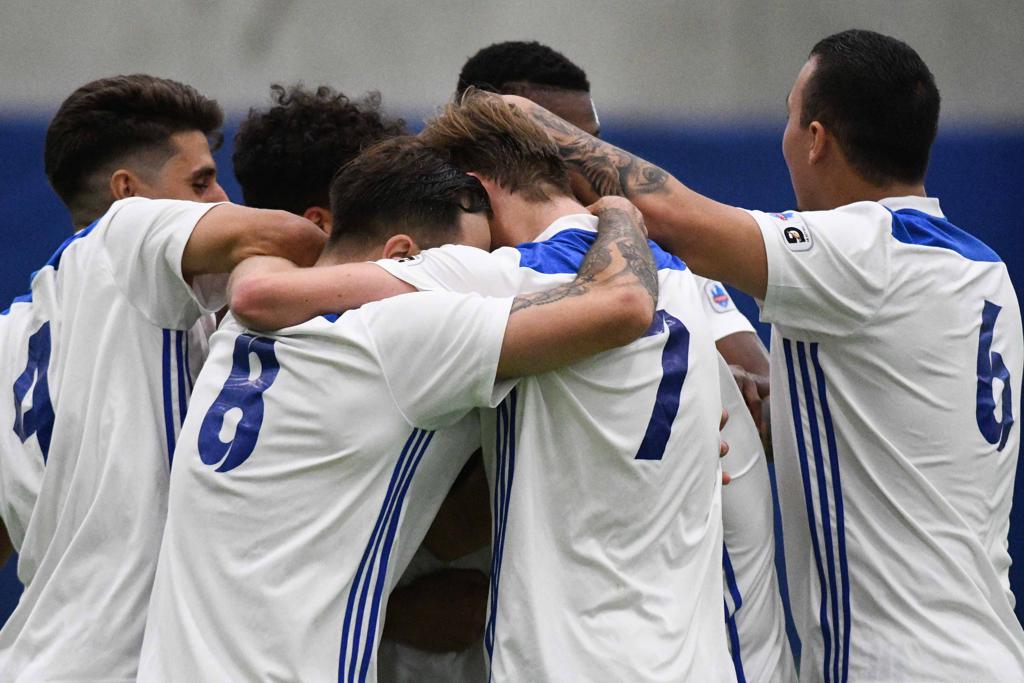 With 10 minutes left in the match, Oakville had nothing to lose pushing most of their players up in the opponent’s half, pinning Woodbridge to eleven men behind the ball.

Oakville would get on the scoreboard moments later when a scramble in the box resulted in a tap-in from Felipe Vilela (81’). It was game-on now as Oakville chased the equalizer.

Issac would be dismissed from the match in the 88th minute of play putting Woodbridge down to 10 men.

After several injuries, fouls, and stoppages this half, the fourth official indicated a minimum of five minutes of added time.

Just as everyone thought the match was over, Oakville’s Victor Gallo crossed the ball in from the right side to find Nuno Carvalho (90+5’) in the box, as he headed it into the right side of the net to tie the match.

With the result, the Oakville Blue Devils and Woodbridge Strikers are both tied for first-place in Group B with four points and a goal differential of +2.

Click here to keep up on all the news, goals, wins and statistics for Oakville Blue Devils on their team page.

As for Woodbridge Strikers, they will next play host to Unionville Milliken SC on Oct. 14 (5:00 pm) at Vaughan Grove Turf.

Click here to keep up on all the news, goals, wins and statistics for Woodbridge Strikers on their team page.