Unionville Get Away Point In London After 1-1 Draw

It was a long night for Unionville Milliken SC and FC London at the German Canadian Club on Friday night after kickoff was delayed by 90 minutes due to lightning and thunder.

Still, the fans remained and were treated to a back forth game that saw both teams have their chances in an exciting 1-1 draw.

The teams were spirited at the start of the game, the players appearing focused and energized. In the early going, the two sides battled hard to get control the tempo of the game based on their tactical plan.

The back and forth first half saw both teams create good chances in the early going.

Just six minutes in, after a Unionville foul in the midfield, FC London's Randy Ribeiro stepped up to take a free kick from 40 yards out, just missing the net with a powerful drive.

Unionville had a great opportunity of their own in the eighth minute, when their midfield played a great ball to striker Hassan Abdulmumini. He took one touch and unleashed a low rocket from outside the 18-yard box that went wide of the FC London keeper A. Sokolaski.

Ball possession began to shift in the favour of FC London as they looked to play the ball through the middle and out wide, while Unionville's shape remained compact and organized, limiting FC London's scoring chances.

Unionville's Abdulmumini was quickly front and centre again, looking to score the first goal of the game. He picked up a loose ball in the 18-yard box but his shot was saved by FC London keeper Sokalski. Unionville continued to push forward looking for the lead and had two great chances inside the 18-yard box with Abdulmumini and Tre Crosby each having great looks at goal. Both forwards were stoned point blank by London's Sokalski.

These Sokalski saves changed the momentum of the game, with FC London immediately pressuring higher up the field. The breakthrough arrived shortly afterwards as London's Mohammad Reza Nafar (29') intercepted a pass and blasted a bullet from outside the 18-yard box to give FC London a 1-0 lead. 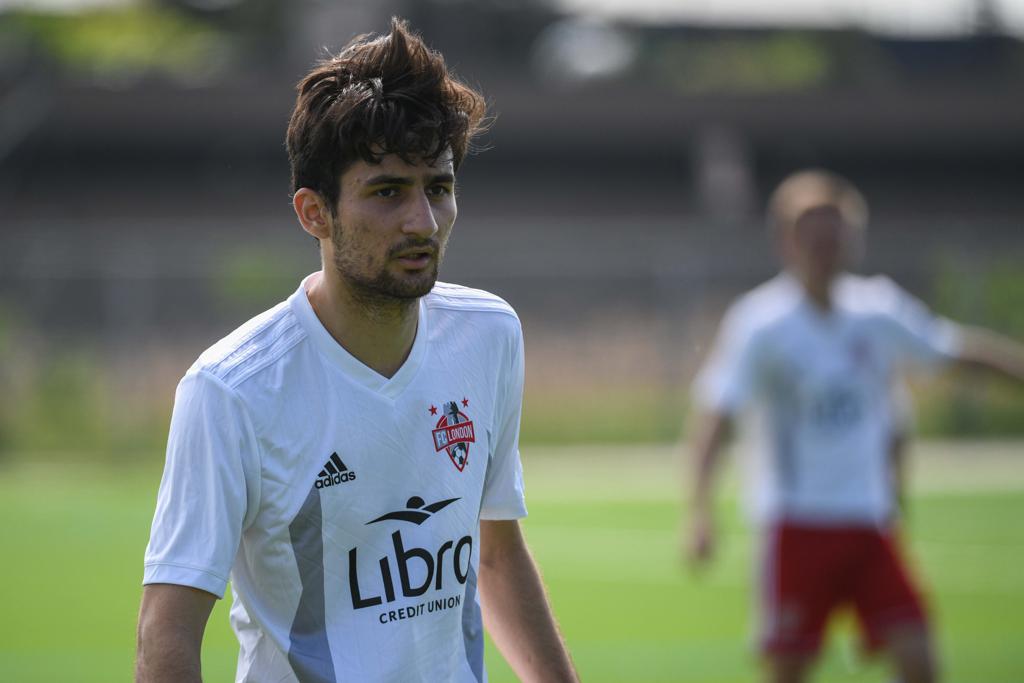 Unionville responded well to the FC London goal, and were awarded a penalty kick for a hand ball in the area. Unionville's Crosby (38') stepped up to the penalty spot and calmly slotted the ball to level the game.

In the second half, FC London was pushing forward and trying to get the go-ahead goal while Unionville was primarily looking to defend and counter. Aggressive play continued and Unionville's Bradley Heath was given a caution for a late tackle just before the hour mark, while London's Ribeiro saw yellow shortly afterwards for a tactical foul at midfield to negate a Unionville counter attack.

Unionville continued to drop deeper into their own half to defend and seemed to be tiring and content with a draw. FC London continued to control the possession in the Unionville half, trying to find ways to get behind the back-line, but on the few occasions they threatened the net Unionville keeper Adrian Ibanez was up to the task.

The game ended with the score tied at 1-1 and on a night when it looked like the game would not be played due to weather - the fans were treated to a tremendously spirited game.

FC London will have a break for a couple of weeks and then will look to build on their six-league game unbeaten streak when they travel to L'Amoreaux, Toronto to take on Masters Futbol on August 11 (8 p.m.).

Unionville Milliken S.C. will have a break for a couple of weeks as well and will look to get back on the winning track when they travel to the Ontario Soccer Centre to take on Toronto Skillz on August 12 (6 p.m.).