Santos Brace Leads The Way In Woodbridge 7-0 Over Windsor

A total team effort from Woodbridge Strikers resulted in a convincing 7-0 victory over Windsor TFC, making the Strikers' journey home a fun ride.

Woodbridge started with the ball and quickly demonstrated they were ready to get going.

Woodbridge moved the ball out wide and T. Rayne crossed the ball into the box for M. Santos (1'), who was able to beat the Windsor defender to the ball and slot it past Windsor TFC keeper A. Cesare in just the first minute of the game.

As the first half continued, Woodbridge stayed on the front foot, controlling possession and tempo and putting Windsor TFC on their heels.

In the 28th minute, Windsor TFC's G. Ferri was given a caution for a late tackle on Woodbridge's right back, M. Krzeminski.

In the 34th minute, frustrations began to show as Windsor TFC's M. Pio was given a caution for vehemently arguing a call.

In the 36th minute, Windsor TFC keeper A. Cesare took down a Woodbridge forward in the box and a penalty kick was awarded.

M. Santos stepped up to take the PK and complete his hat trick, but A. Cesare was up for the challenge and made a routine save to keep the scoreline 2-0 for Woodbridge.

Woodbridge continued to control the ball and Windsor TFC could not muster any potent attacking threats before half time. On the other hand, Woodbridge's B. Cullen (43') was allowed to dribble down the left flank and into the box before calmly placing the ball behind A. Cesare to making it 3-0 for the visitors at the break. 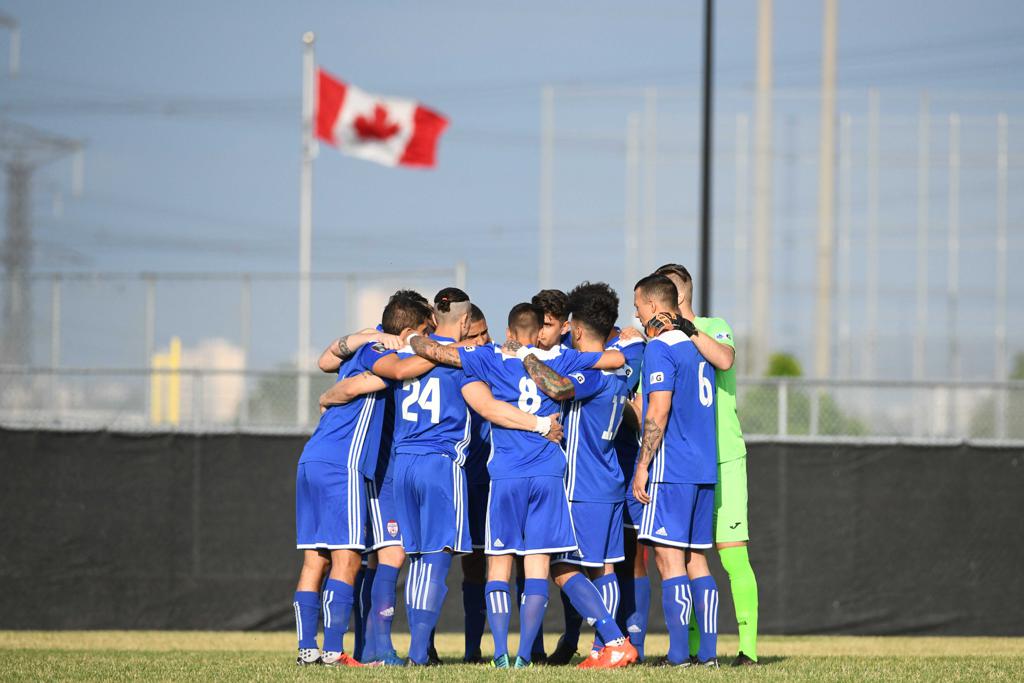 Windsor TFC was determined to get into the match in the second half and controlled the first ten minutes after the restart, creating some attacking moves that resulted in shots on net but were easily dealt with by Woodbridge keeper R. Stillo.

The pace slowed in the second half as the heat and humidity took its toll on the players, but as the match approached 70th minute Woodbridge again started to reassert ball possession and tempo.

Immediately they were rewarded as Woodbridge's I. Muccilli (71') was given time at right side of the box and he blasted the ball to bottom left corner past A.Cesare to make it 4-0.

Woodbridge was energized by the goal and forward L. Baldassarre (76') was then able to get a loose ball after a free kick and put it past A. Cesare to make it 5-0.

Woodbridge did not stop pushing forward and E. Issac (83') was able to get behind the Windsor TFC defence and calmly put the ball behind A. Cesare to make it 6-0.

The final goal of the game came just minutes from full-time when Woodbridge's M. Krzeminski (85') was able to dribble down the right side and his left footed shot beat the Windsor TFC keeper to make it a final score of 7-0.

Woodbridge keeper R. Stillo wasn't really tested throughout the match, but he was involved in the game, vocally helping to organize the positioning of his teammates to ensure the clean sheet.

Windsor TFC will next travel to Brampton to take on Pro Stars FC at Victoria Park on July 21 (7 p.m.)

Woodbridge Strikers will next travel to L'Amoreaux, Toronto  to take on Masters Futbol on July 21 (8 p.m.)