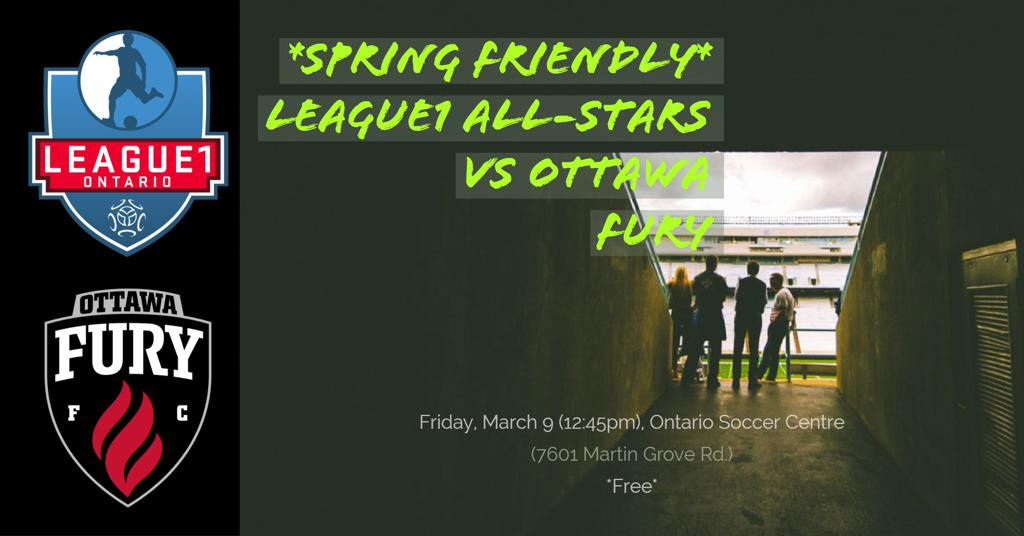 After a very strong showing in 2017 pre-season against USL side Ottawa Fury in the Nation's Capital, a League1 Ontario All-Star Selection is again preparing to take on the Fury, this time with a home date at the Ontario Soccer Centre (7601 Martin Grove Rd) on Friday March 9.

"We are very pleased to team up with the Ottawa Fury to organize this pre-season friendly match for the second year in a row," said League1 Ontario Commissioner, Dino Rossi Jr.

"This is a great opportunity for many of the players who were named 2017 All Stars to square off with a strong, fully-professional side."

The 2017 edition of this match-up produced an entertaining back-and-forth affair, with the League1 side growing in presence throughout the match, creating an appetite for another pre-season fixture in 2018.

The Ottawa Fury will have a brand new look to their technical staff and squad in 2018, with recent announcements including GM and former Canada Men's National team player Julian De Guzman and an exciting new head coach in Nikola Popovic. There has also been a raft of exciting new signings brought into the side.

"I have enjoyed a good relationship with Julian DeGuzman, General Manager of the Fury, for many years," explained Rossi.

"I was quite pleased to receive confirmation a few weeks ago that he wanted to organize another friendly against the League1 All-Stars, this time at the Ontario Soccer Centre in Vaughan. We hope to make this an annual event."

Ontario Soccer and League1 Ontario are pleased to make this event open to the general public, free of charge. The match will kick off at 12:45 p.m. on Friday March 9.

For those unable to attend, the match will be streamed live on the League1 Ontario Livestream channel.

"This L1 team is made up almost entirely of players who were named All Stars in 2017," explained Rossi.

"Unfortunately not every 2017 All Star was available for selection, including several who have moved on to play at the fully professional level abroad, but we are quite pleased with the quality of our squad on paper," he added.

The League1 Ontario All Star selection will be led by Peter Pinizzotto, head coach of Woodbridge Strikers, who will be supported by Ilya Orlov, head coach of Alliance United FC, one of the league's new men's sides for 2018.