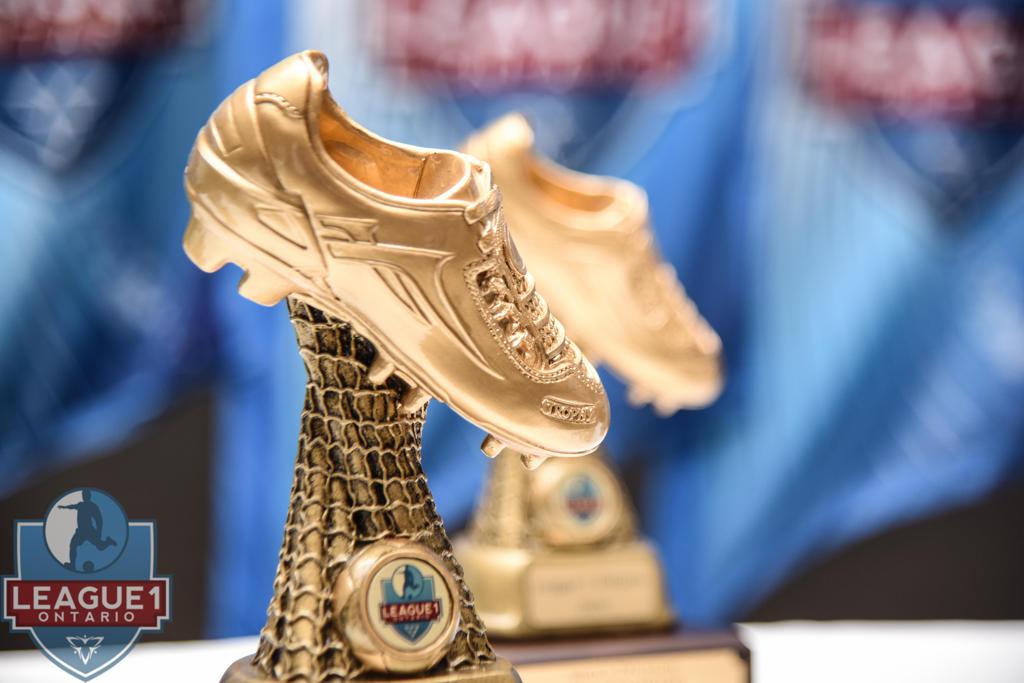 In the first of a set of daily League1 Ontario 2017 Awards announcements leading up to the L1O Awards banquet on Sunday November 12, the 2017 Golden Boot winners have been revealed, featuring two outstanding performers from the 2017 season.

Although the winners of these particular awards are strictly determined by the cumulative goals scored by an individual player, and as such the winners have been known for some time, the winners had not yet been declared formally. 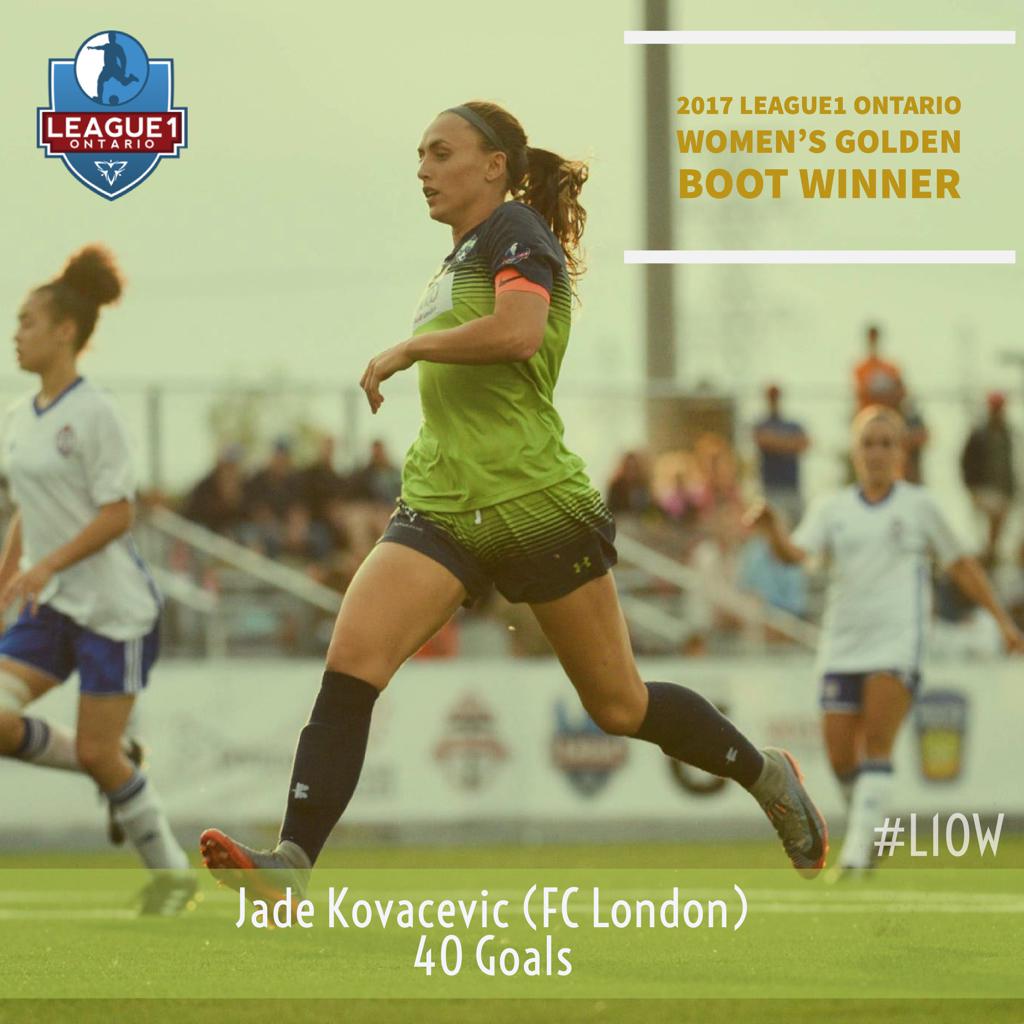 Jade Kovacevic continued on from her 2016 Women's Golden Boot-winning season by winning the 2017 Golden Boot edition and as well leading FC London to back-to-back league titles. She was also instrumental in securing the 2017 L1 Cup for FC London, capping a tremendous double for her club and essentially a triple award winning season for Kovacevic herself.

Her form in only two seasons has been the talk of the entire league, not just the women's division, and led to widespread opinion that she is a domestic talent that should once again be looked at by the Canadian National Team program.

Kovacevic made appearances in every FC London league game, smashing in 40 league goals in just 1,731 minutes - good for a goal every 43 minutes (a goal a half!) - including four matches with four goals and another four matches with hat-tricks.

Additionally, although not officially a part of her Golden Boot tally in league play, in the L1 Cup Kovacevic added five more goals to her name, scoring in every round, including two in the semi-final versus Vaughan Azzurri.

Add to this Kovacevic's continual decorations on the Canadian college circuit, where she has been a perennial All-Star, provincial Player-of-the-Year and even the 2016 national Player-of-the-Year, and you have a bonafide superstar that simply must be given a shot at the highest level. 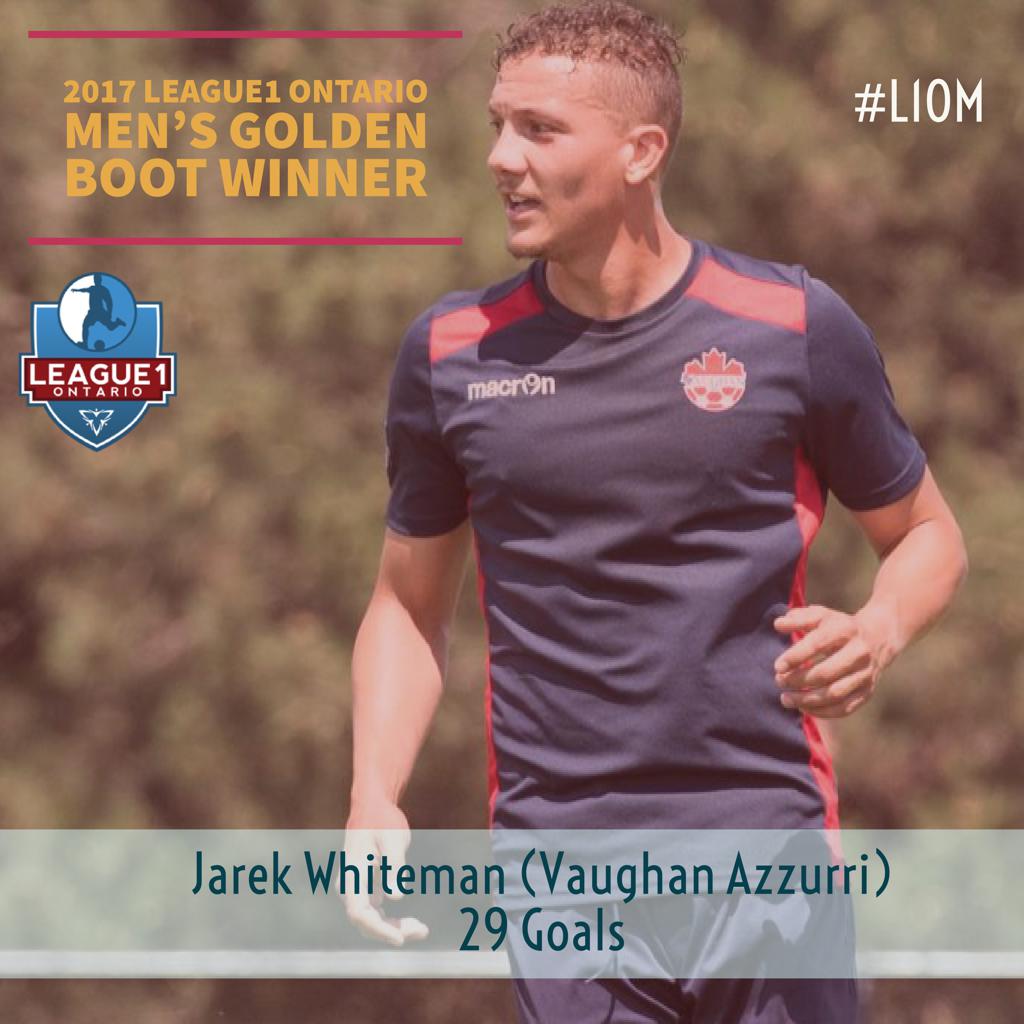 Vaughan Azzurri's Jarek Whiteman played in all 22 games for the east division runners-up Vaughan Azzurri and bagged an incredible 29 goals over those 1853 minutes - good for one goal every 64 minutes.

Whiteman had three hat-trick performances and four braces en route to the Golden Boot title, but his season high point was certainly a seven goal haul at the expense of Pro Stars FC on July 15.

A former member of the Canadian National Team program at U17, U20 and U23 levels, Whiteman brought goalscoring class to the Vaughan forward line, showing versatility to play in any of the front four roles for the Azzurri. His movement off the ball has also been one of his hallmarks, creating space for the Azzurri's other attackers and helping to establish the fluent pass-and-move style that has been the Azzurri's signature.

Whiteman also won the PDL Championship with KW United in 2015, scoring one goal in the championship final.

Congratulations to Jarek Whiteman on the 2017 Men's Golden Boot!