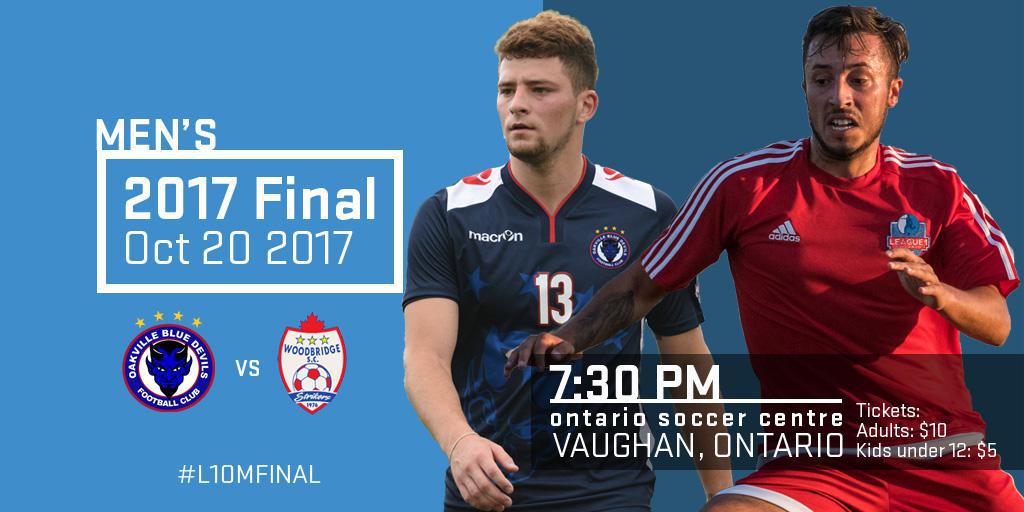 With only a few days to go before an historic #L1OMFINAL - one that will, for the first time, send the winner to represent League1 Ontario in the following year's Canadian Championship - let's take a head-to-head look at the two contenders.

Woodbridge were League1 Ontario runners-up in 2014 and 2015 when the league was a single table, first-past-the-post style competition and finally got their hands on silverware when they won the L1 Cup in 2015 after defeating Sigma FC 2-1.

The Strikers went through 2016 with no further trophies however, losing narrowly in the L1 Cup Final to their local rivals, Vaughan Azzurri. 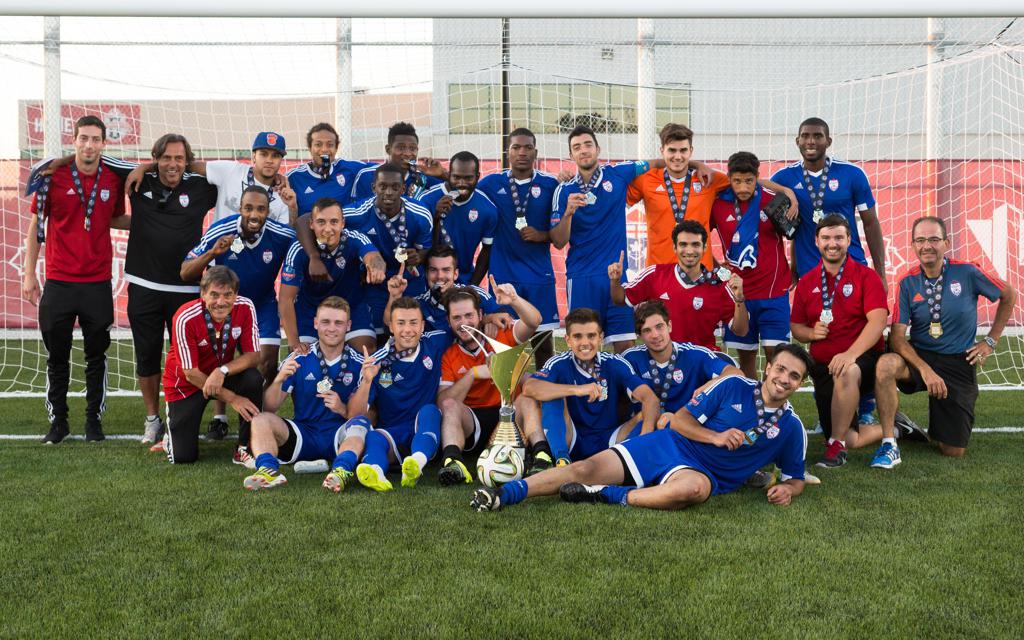 In only their first season, Oakville Blue Devils won the double in 2015, taking the league title over second-place side Woodbridge Strikers and defeating Quebec champions CSMRO Griffons in the 2015 Inter-Provincial Cup.

It was an outstanding League1 debut for the Blue Devils, but was not destined to continue in 2016 as the team dealt with widespread injuries and struggled to find form, finishing sixth in the west division.

As one can see, both Oakville and Woodbridge have tasted the sweet heights of victory and the bitter taste of defeat in recent campaigns. A sense of urgency will be there for both sides, with Woodbridge one step away from claiming their first league title, and Oakville keen to prove they can repeat the magic of their debut season. 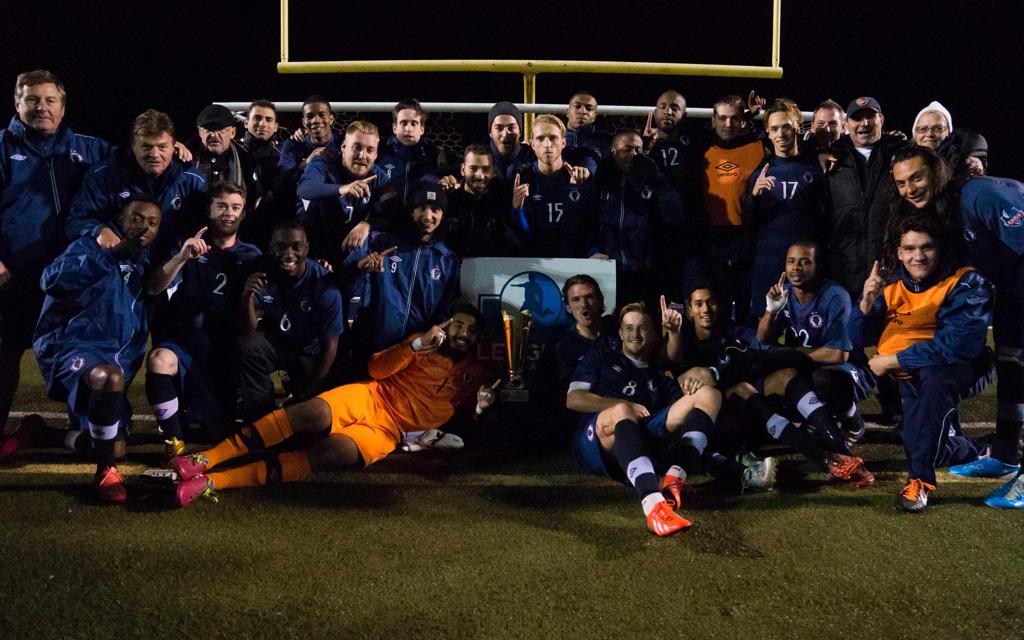 In terms of technical staff, both head coaches will be well known to one another after significant time spent within the Toronto Lynx organization in previous years. Among many achievements as Lynx managers, Oakville's Duncan Wilde went to the Canada Cup final in 2006, and Peter Pinizzotto managed the side in the A-League from 1997-2003.

Consistency of management is a shared trait between the two sides, as Wilde was at the helm of the Blue Devils along with trusted assistants Billy Steele, Brett Mosen and Glenn McNamara in 2015 when he guided his side to a fantastic League1 Ontario double-winning season, and Pinizzotto was honoured all the way back in League1's first season. The Woodbridge manager was then chosen as the 2014 League1 Ontario Coach of the Year.

Both sets of technical staff are known for their pragmatism and attention to balance in their sides, unwilling to grant space in front of goal while looking for any opportunity to slice open the opposition following an error in possession.

Much like the previous meeting between these two - the only one in 2017 - a cagey and physically demanding war of attrition in midfield can be expected before any breakthrough in front of net. 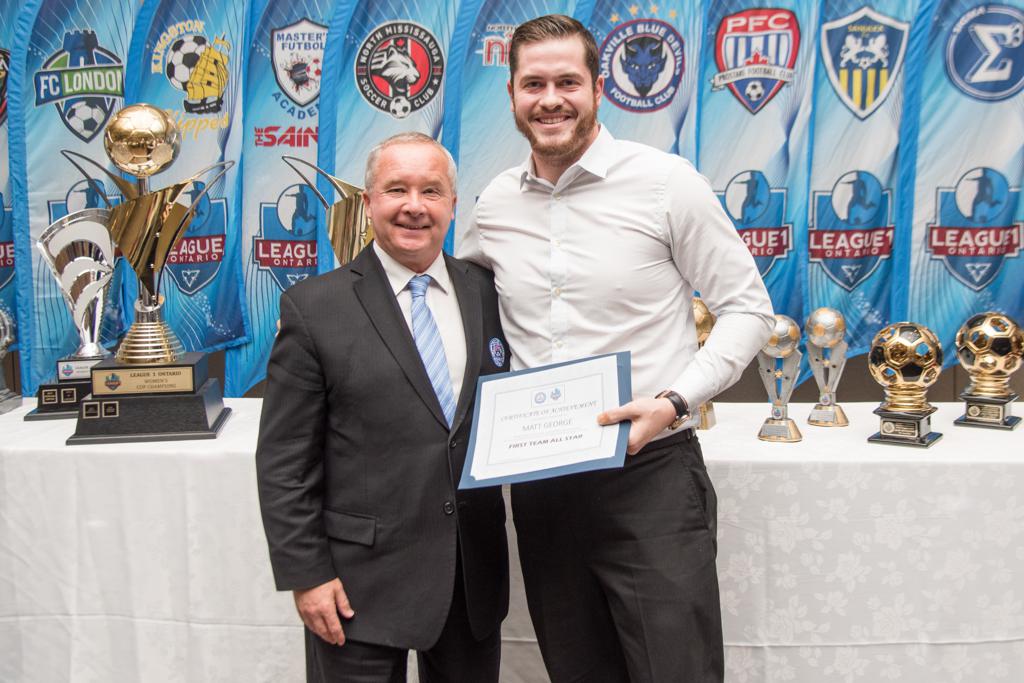 In this department, we have an interesting angle. Oakville Blue Devils' keeper Matt George is well-known to their opponent Woodbridge Strikers, having backstopped for the east division champions for three years before moving across town in 2017 to the west division champs, Oakville Blue Devils. George is an alumni of Laurentian University and a former professional in Canada and Hungary (Csakvar F.C.).

A perennial League1 Ontario All-Star, George is also the two-time defending Goalkeeper of the Year. Having managed a 0.72 GAA in 2015 and a 0.86 GAA in 2016, the Blue Devils pulled a real coup when they managed to prise the most decorated keeper in the league away from the Strikers. His 2017 GAA was 0.92.

But Woodbridge head coach Peter Pinizzotto might have quickly got over the disappointment of losing his number one after recruiting a former Toronto FC first team keeper, Quillan Roberts, at the outset of the 2017 season.

Quillan Roberts will be well-known to Toronto FC supporters, having been the seventh TFC Academy product to be signed up to the first team in 2012.

Roberts went on to Wilmington Hammerheads in the USL, before returning to TFC II on loan in 2015. He parted ways prior to the 2017 season and has been one of the top keepers in the League1 men's competition since. With Roberts in net, the Strikers have lost only two matches in 19 appearances. His 2017 GAA was 0.79. 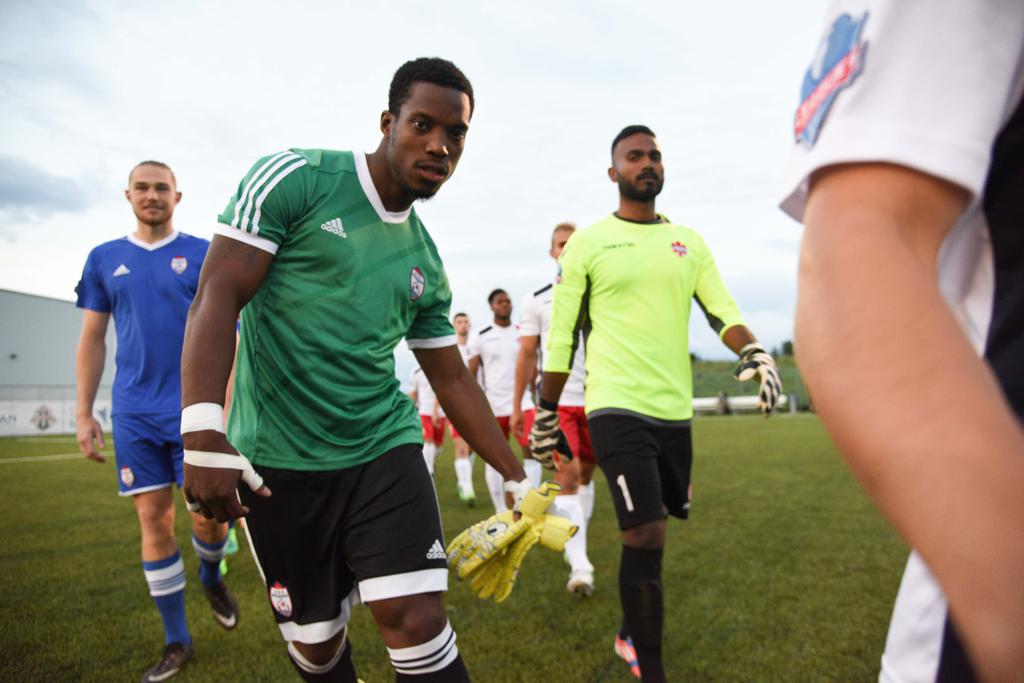 Both sides have shown their defensive acumen, and you can read all about it with this focus on their Defensive Technicians here.

In short, Woodbridge have the best defence in the league (remarkably, they have held that honour for four seasons), while Oakville are not far back with only four more goals conceded.

With a couple weeks since their final league match, both teams should be back to full health and be able to call upon their first-choice side. However, it's worth noting that the Blue Devils have had to experiment with their defensive quartet in the late season period.

One can reasonably expect Vince Gallo and Connor McNamara to anchor the line, with veteran Al James to take up the left and Hitesh Joshi off the right, but Wilde's ability to get versatility from various players in his side makes the question difficult to answer.

On the Woodbridge end, reliance on Kyle Watson has made that selection inevitable, but speculation remains about whether former TFC Academy product Quante Abbot Hill Smith or Michael Fayehun will anchor him.

One expects to see veteran Stephen Almeida as a full-back, but will Jonathan Parades-Procter's left foot and physicality be needed in central midfield (as he did in the last meeting with Oakville) or slide in at left back over recent Canada Men's National Team invitee Michael Krzeminski? 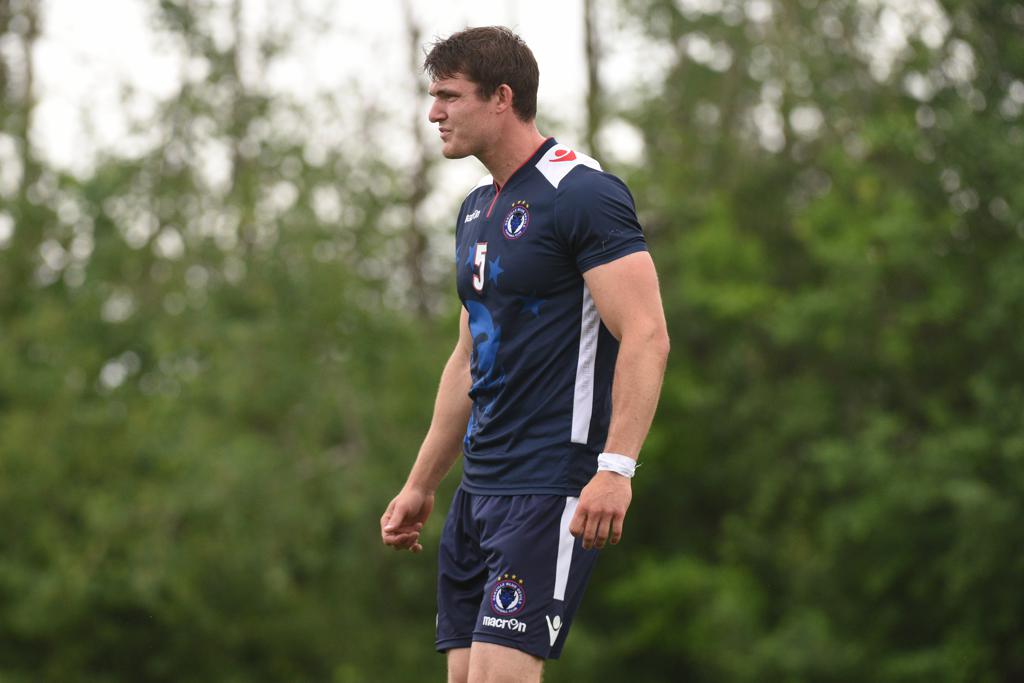 He has recently been flanked by former TFC player Oscar Cordon, whose mix of experience, trickery and physicality complements the deeper-lying Carriero and allows him space to deliver the crucial through ball.

On the Oakville side, one needn't look past captain Taylor McNamara, whose awareness and veteran understanding for the game is the beating heart of the Blue Devils team.

Judah Hernandez is also well-suited to this zone of the pitch, demonstrating a good positional understanding and well able to both break up attacks and get forward.

But the recent addition of former Canadian international Stephen Ademolu has provided a late season x-factor. One can expect Ademolu to hold and provide important cover if needed in central areas, but also to get forward and score crucial goals - just as he did in the Blue Devils late season result over Toronto FC III. 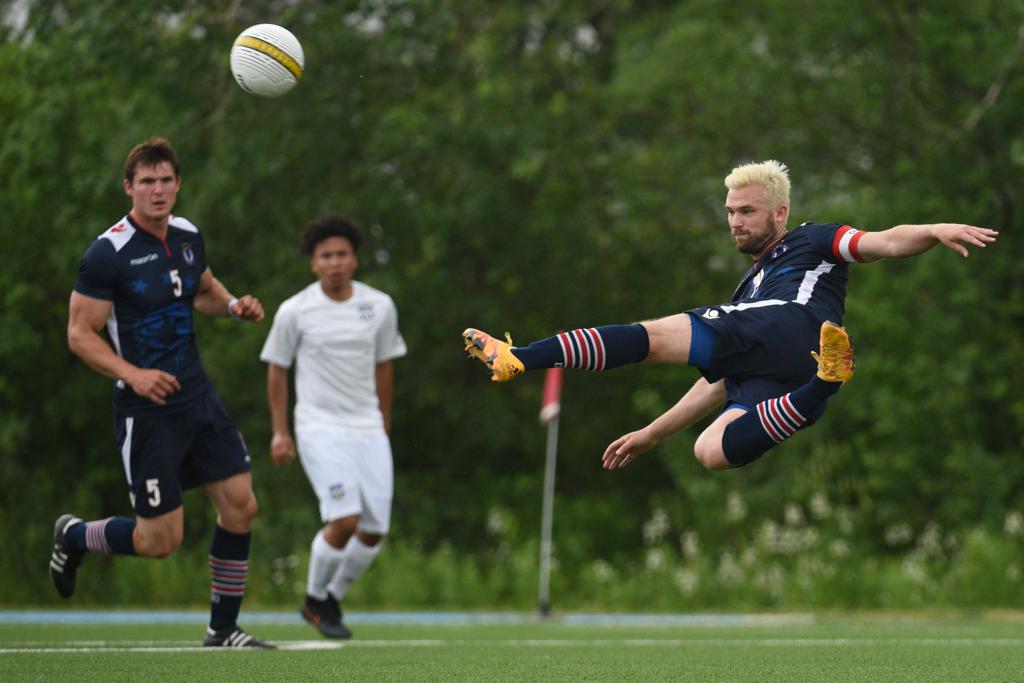 Head over to our piece on the Attacking Forces in these teams and get a full breakdown of the teams' best spearheads, but for now - let's take a look at who may have an edge in this department.

Oakville Blue Devils were fourth in the league in the goals for column and feature numerous players that can stick the ball in the net, from 2015 League1 Ontario Golden Boot winner Felipe Vilela to recent U21 graduate and current team top-scorer, Mathew Santos. Anthony Novak and Khody Ellis have also chipped in, scoring 10 and seven goals respectively, while four goals from big centre-back Connor McNamara speaks to the Oakville side's abilities from set-pieces.

Woodbridge's regular goalscorers are less apparent, with Luca Baldassarre finishing the season as top scorer on nine goals - many of those coming after Baldassarre came off the bench late in the match. His ability to find match-winners is something to keep an eye on. All told though, Woodbridge left something to be desired at the attacking end of the pitch and came in eighth overall in League1 Ontario in the goals for column.

However, Christian Cavallini - who is still one of the key attackers in the team - scored the winner that day way back in 2015 when the Strikers won the L1 Cup, and he is still one to watch - Cavallini is currently the Canada-wide CIS leading scorer with York Lions.

A real mouthwatering #L1OMFINAL is on offer for this historic occasion; who is your money on? 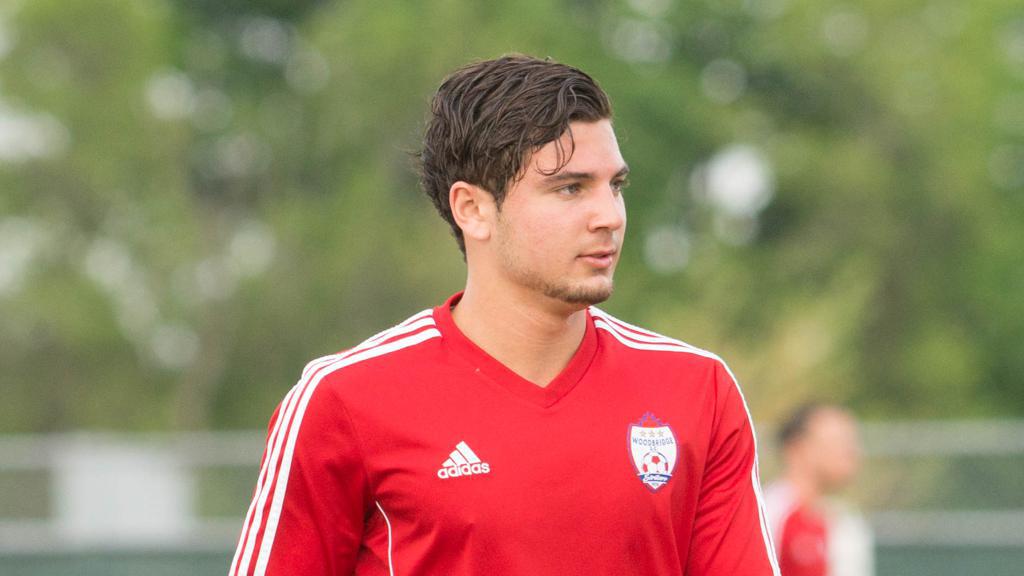