"With the introduction of the PLSQ champions and League1 men's champions into the Canadian Championships for 2018, our two leagues decided that we would not continue with the Inter-Provincial Cup competition that has traditionally been held at the end of the season for our division III leagues," said League1 commissioner, Dino Rossi.

"However, we both believe it is important to keep a connection ongoing between the only two leagues at this tier in Canada so we agreed to stage an all-star game featuring the top talent from both leagues." 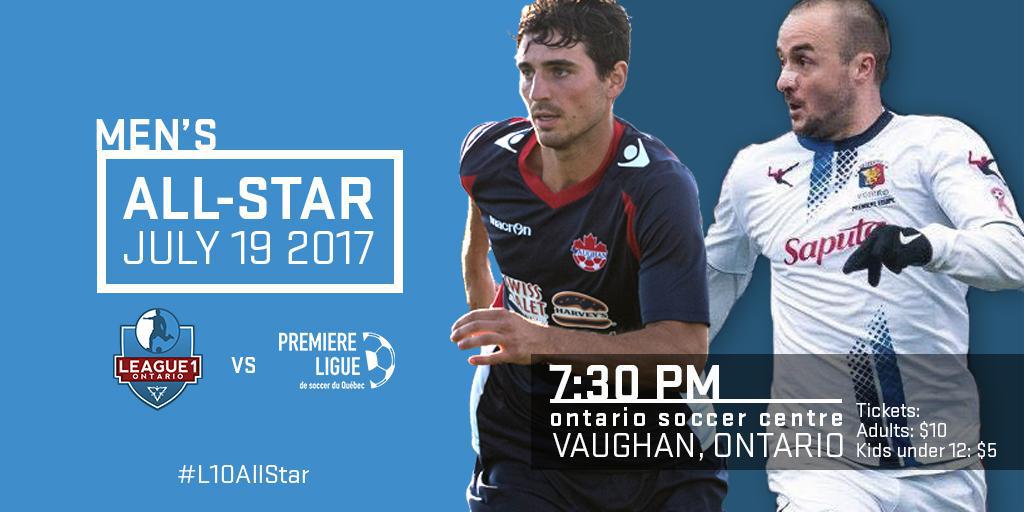 The 2017 League1 Ontario Men’s All-Star match will be played in Ontario, with the event already scheduled to go on tour to Quebec in 2018.

"This is ultimately a showcase platform for the best 40 or so players in our two leagues," said Rossi.

With the inauguration of the Canadian Premier League planned for 2018, this match will be a fantastic way for fans and potential teams to get a look at the best players from the semi-pro/ pro-am division III leagues in the provinces of the Ontario and Quebec - currently the highest domestic tier of the game.

"I think this match will open some eyes. I don't think people in the soccer community fully grasp how good the quality of football is at our level," said Rossi.

PLSQ commissioner Kambiz Ebadi mentioned that he and Rossi have been discussing an all-star match between the two leagues for quite some time.

"Organizing the Inter-Provincial Cup at the end of the season and all-star game in both leagues schedules was a big challenge in previous years," said Ebadi.

"Fortunately, this year with the cancellation of the Inter-Provincial, we have the opportunity of showing our best players in the game." 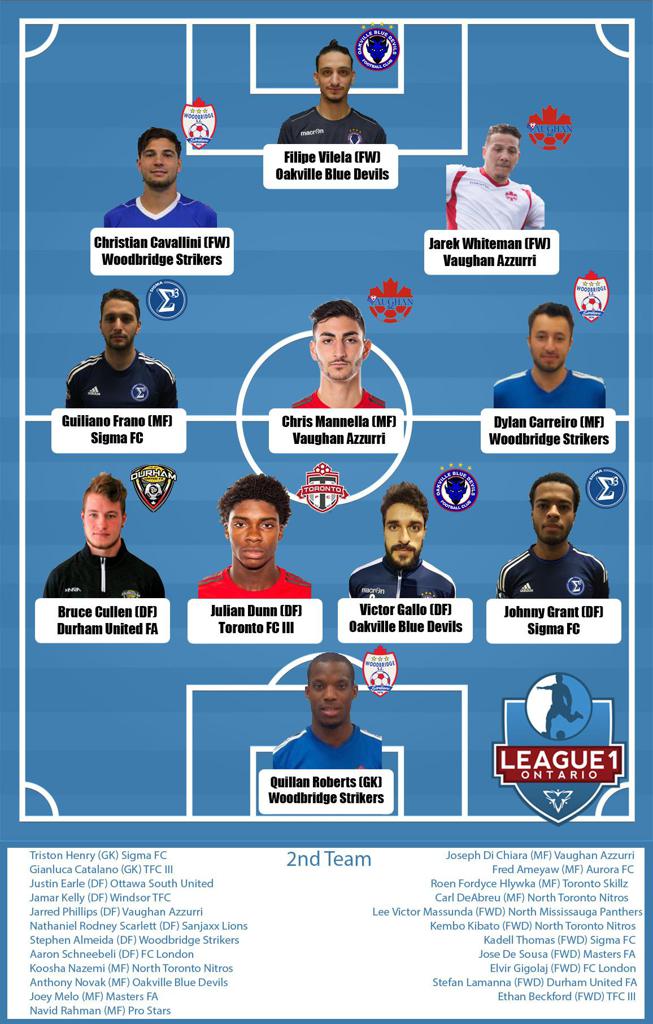 Selecting the best players was hard for Rossi, but with nominations and input from the technical staff at every member organization in League1, League1 Ontario (L1O) was able to draw together the best possible squad for the event.

This year's League1 roster has a good mixture of former Canadian youth national players, and others that have played abroad professionally.

Leading the way from the front will be former Canadian U17 and U20 player Jarek Whiteman of Vaughan Azzurri (currently the League1 Ontario men's goals leader) and 2016 League1 Ontario Golden Boot winner Filipe Vilela of Oakville Blue Devils.

In the midfield, the connection between former professional players and Canadian internationals continues.

Woodbridge Strikers' attacking midfielder Dylan Carreiro has represented Canada at the U23 and U20 level, and has made appearances for Scottish side Arbroath FC and Dundee FC. His teammate, Cristian Cavallini had stints in Uruguay and Italy.

Next to them are two Vaughan Azzurri midfielders in Joseph Di Chiara and Chris Mannella. The 25-year-old Di Chiara spent time in eastern Europe with Russian sides Torpedo Moscow and KS Samara, Hungarian side Kecskemeti TE and Kazanian side Okzhetpes.

His teammate Mannella was a Toronto FC Academy product who signed a first team contract in 2014 and captained their USL team, Toronto FC II, during their inaugural season in 2015. Mannella also represented Canada at the 2015 Pan-Am games and was a part of their 2016 Olympic qualifying team. 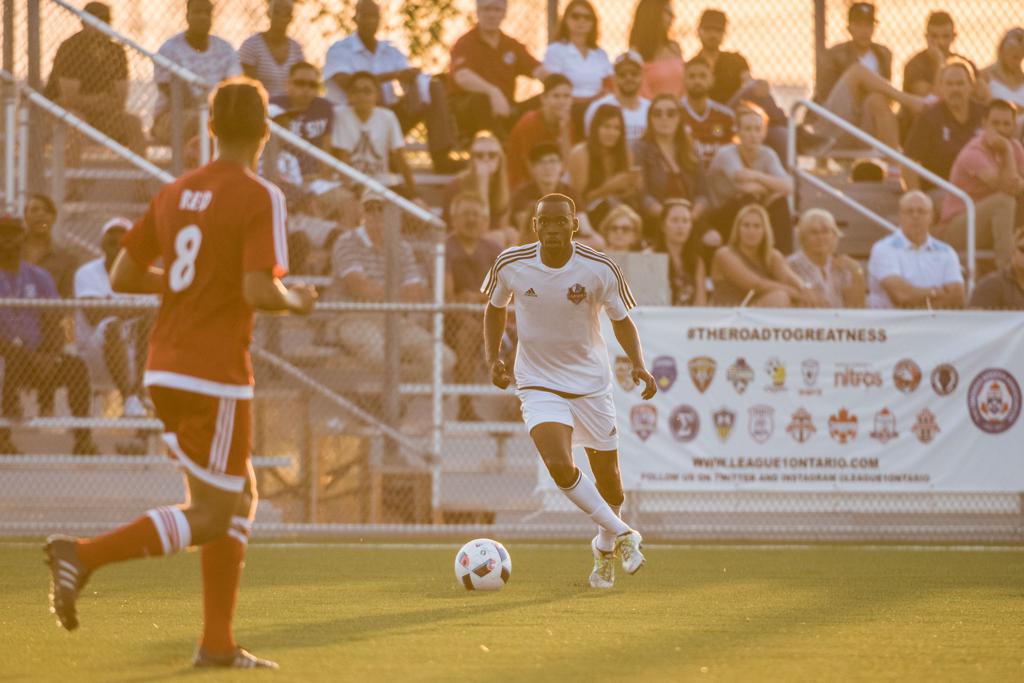 In the back-line, former FC Montreal and Swope Park Rangers full-back Jonathan Grant (Sigma FC) is one to watch down the flanks thanks to his pace and dribbling abilities.

In goal, former Toronto FC keeper Quillan Roberts has been a rock behind the defence for his Woodbridge team. His 0.82 goals against average leads the league.

The experience doesn't end on the field for League1. Sigma coach Bobby Smyrniotis has been able to develop some of the most talented Canadian nationals in Cyle Larin, Kyle Bekker and Manjrekar James, and he takes the lead on the coaching staff. 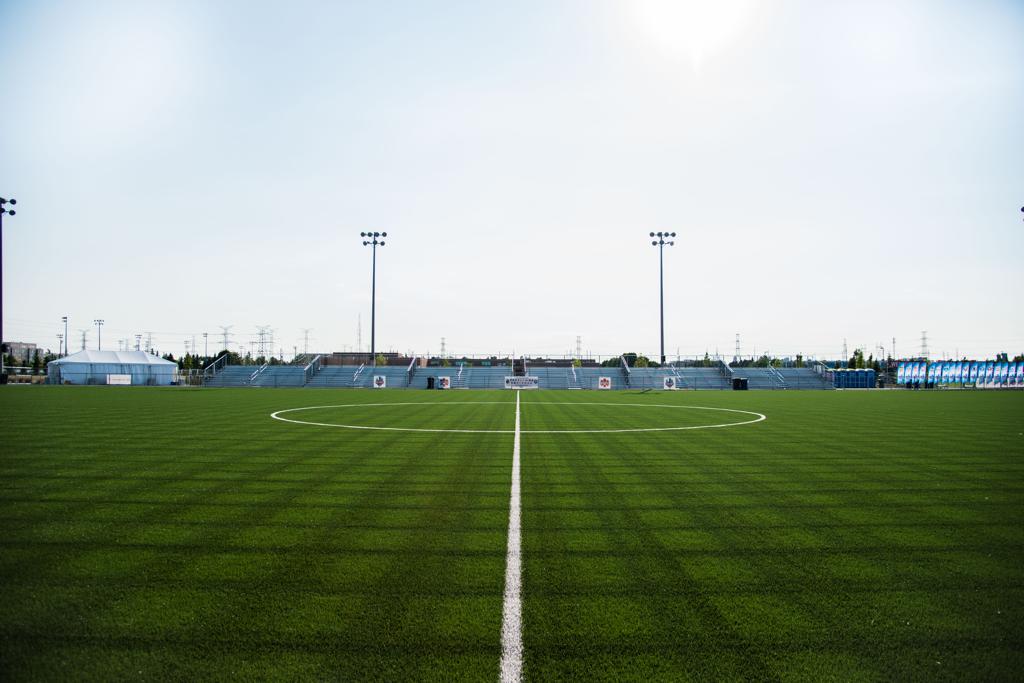 As for League1 Ontario's opponent from Quebec, three players stand out above the rest.

Veteran keeper and former Haitian national team goalie, Gabard Fenelon will prove to be a daunting task for the League1 All-Stars to unlock. Fenelon has appeared 34 times for Haiti at the senior level, and was able to capture the PLSQ championship in 2015 when he was a starter for Lakeshore.

FC Gatineau's Dex Kaniki will also look to be a key part in this team's lineup.

Kaniki, a teammate of Fenelon during their 2015 championship season, leads the PLSQ in goals with seven and was named Player of The Week for the first three matchweeks.

The 34-year-old has represented Canada’s futsal senior national team six times, scoring five times. He is also the joint leading goalscorer this season in the PLSQ along with Kaniki.

The Quebec side will be led by CS Mont-Royal coach Luc Brutus and FC Gatineau's Sylver Castagnet.