League1 Ontario Men's Teams Looking To The Future With U23 Focus 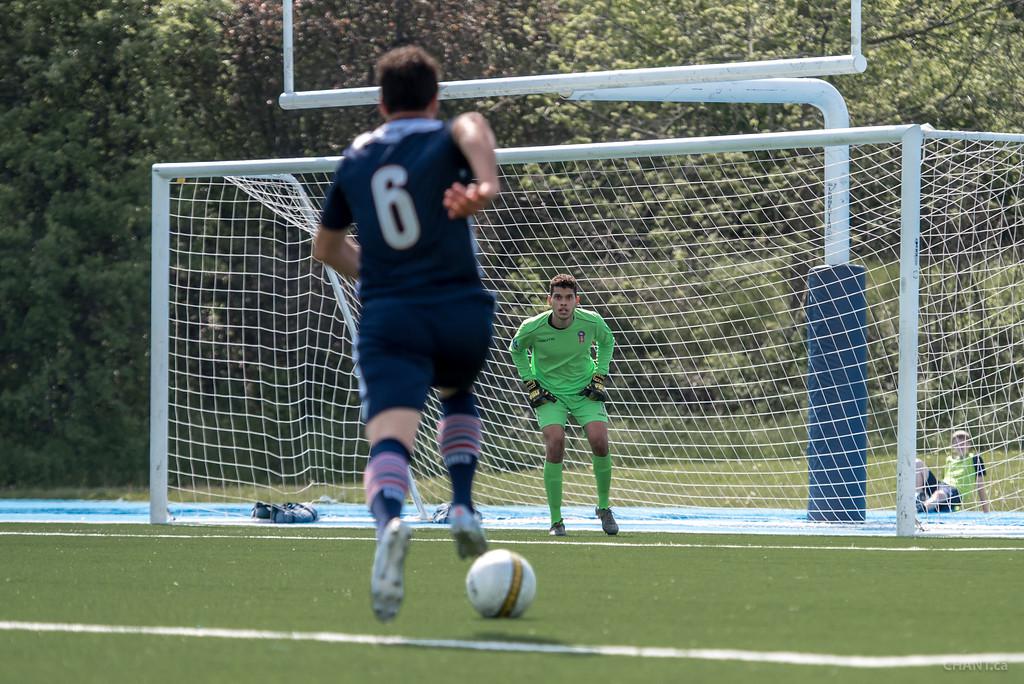 The 2017 League1 Ontario season is still young, but for almost half the teams in the men’s division, they are looking to the future rather than the present.

When League1 Ontario was created four years ago, its commissioner, Dino Rossi, made sure that each member would build a competitive team, while also looking to develop the next generation of Canadian soccer players.

"Once we got down to analyzing the high-performance adult player pool, we realized that, due to the lack of fully professional options for Canadian players, we had an obligation to provide more playing opportunities to slightly older players," said Rossi.

"No matter whether it was U20 or U23 focused, we wanted to ensure that younger players would be able to get starting minutes. So we guaranteed that four players in that age bracket had to start."

"I think it is an important feature of our league and I'm convinced that without it, several very talented young players may not have had the opportunity to shine." 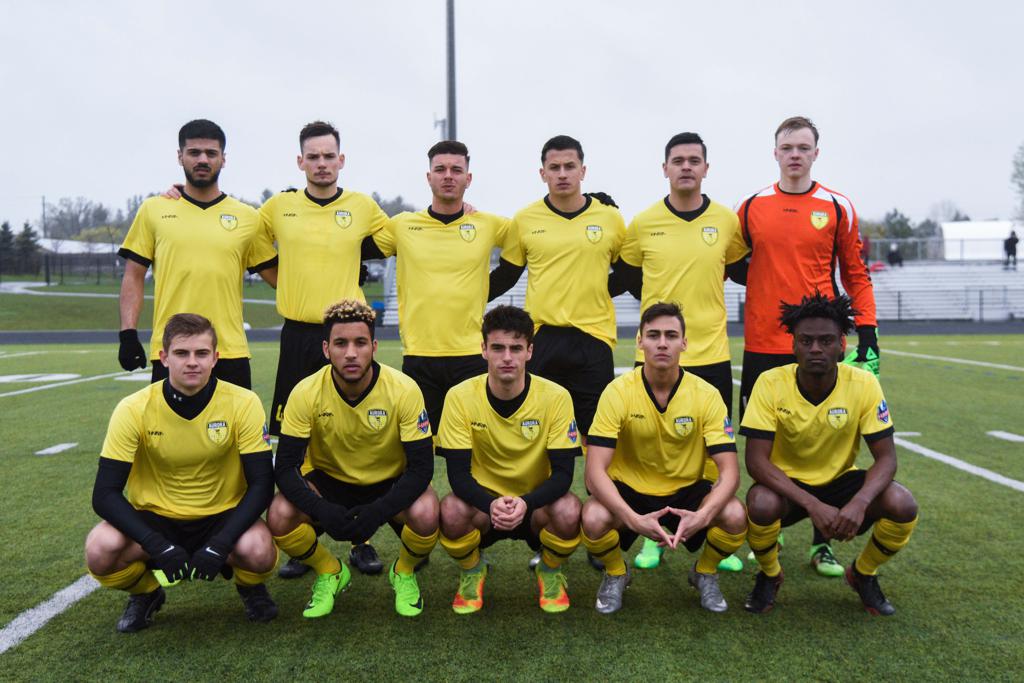 To ensure that youth players could enjoy regular starting time, the league made it policy during year one for each club to start a minimum of four U-23 players per match, and have at least eight on their gameday roster.

All of the aforementioned clubs have started at least ten U-23 players per match and though the technical staff understand results won’t be easy to find, they are patient and thinking for the future.

"Give it time," said Aurora FC head coach Derek O’Keeffe. "These players are learning every day, every week, and we're getting there."

"Let's think long term, let's think of that two-year plan where we say 'ah I see what you're doing here.' You see that at clubs in England and Europe adopt the same kind of ideas, giving young players a chance." 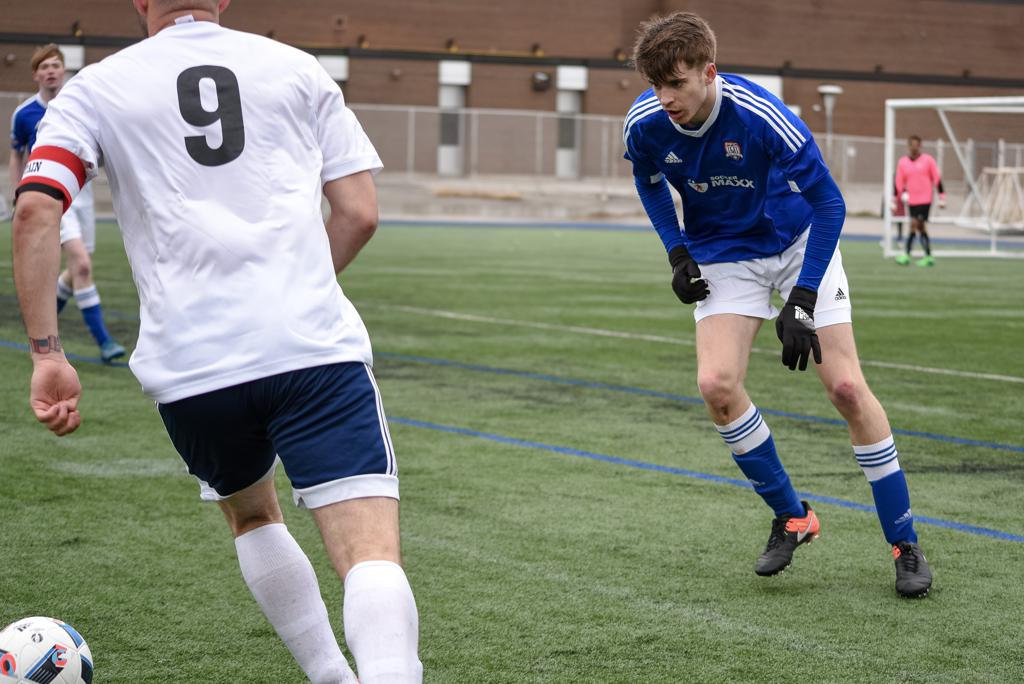 Commissioner Rossi agreed that some teams with a more youth focus could struggle in the beginning, but said that these players need to be able to play a pressured and fast-paced game against men.

"The experience these future stars get playing regularly in League1 definitely prepares them for the speed and physicality of playing professional football, or what they will face at the College/ University level," said Rossi.

"Our clubs are all quite committed to developing the next generation of stars and the best way to do that is expose them to the best level of competition that exists in this province."

Pro Stars director of coaching, Josef Komlodi, has had a long history of coaching talented young players and moving them to European teams.

Komlodi acknowledges that he has a smaller academy compared to other League1 clubs, but that hasn't stopped him from fielding a team that has started at least ten U-23 players per match.

The Pro Stars coach knows that it will be tough for his team to compete with every club, but he did say his focus is on the future. Komlodi expressed a belief that in the coming years his young sides will mature and compete for a league title, and that he is very impressed with his core 2000 and 2001 age group. 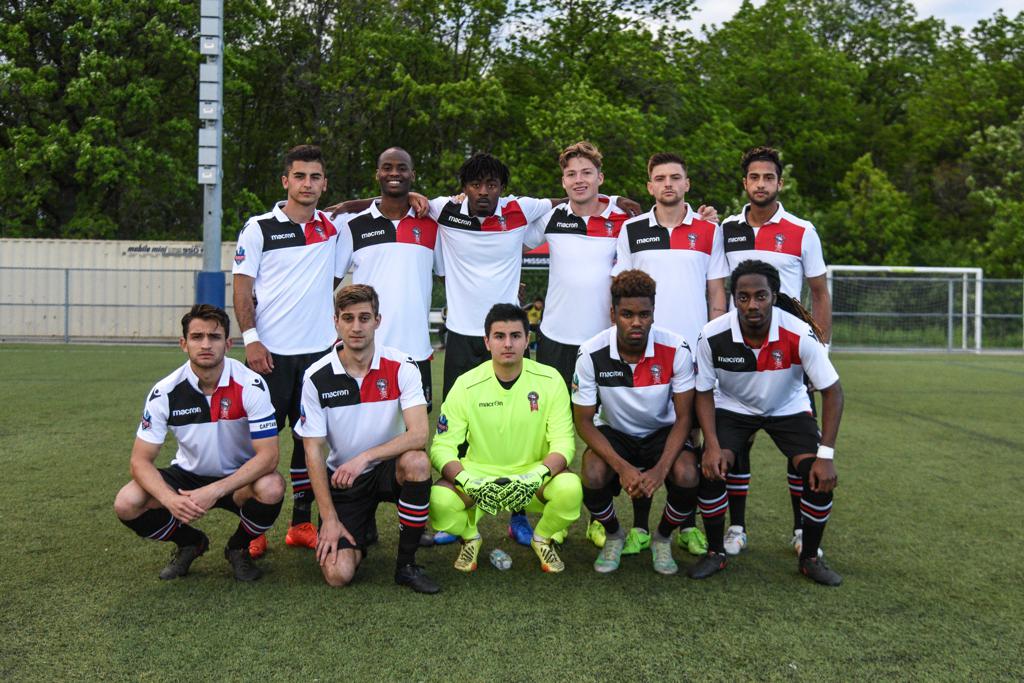 Just like Komlodi, North Mississauga Panthers head coach, Sam Medeiros, is a strong believer in youth. A big reason why he joined the Panthers before this season was because the club gave him freedom to develop their youth his way.

He told the club, "I would like to keep the players that have gone through the system. If they have been here since they were eight-years-old and paid their thousand, two thousand every year, why are we not using them and creating opportunities for them?"

Medeiros then set his mind on working with the clubs youth teams and creating a clearer pathway for them to make it to their League1 squad.

Even though it's always fun to see who will be the next young star and representing their national teams in the future, League1 teams that field many younger players will say that some do struggle to keep up with the more experienced players.

"Some of the kids coming from OYSL, they feel they can just kick the ball forward and run. They have to play smart and understand tactics," said Komlodi.

"[They need to] accept the certain physical expectations." 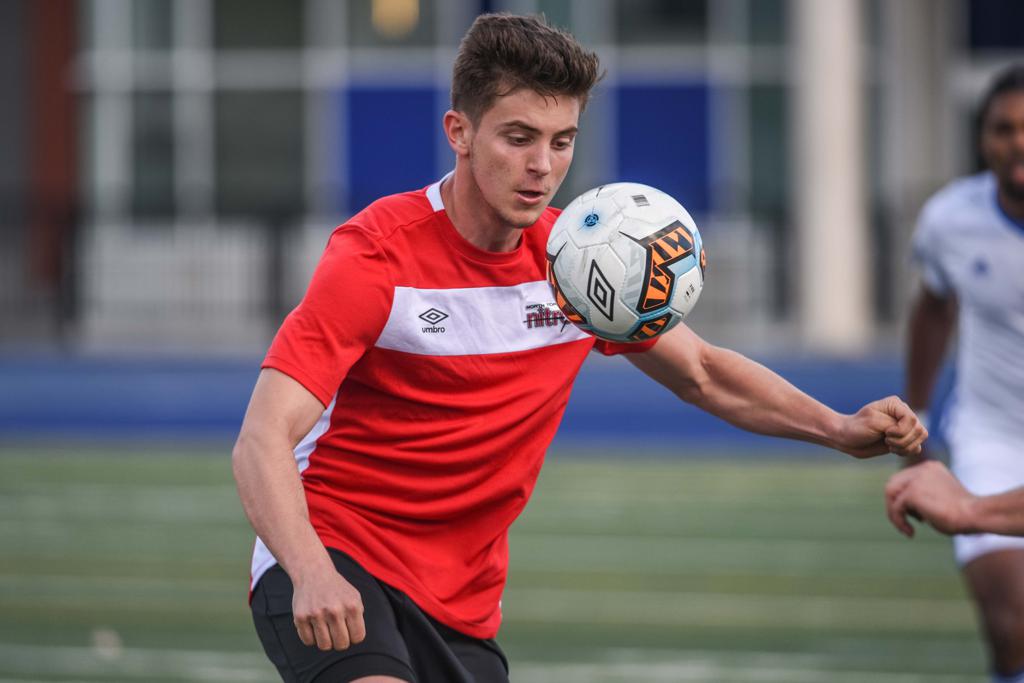 Since joining the league last year, the Nitros have put a big emphasis on youth, starting a minimum of ten U-23 players each game in 2017.

"As a club, we entered League1 with our younger players in mind," said Hyland.

"It has always been our intention to play them and develop players through our system in OYSL and OPDL."

Hyland mentioned that the Nitros have strictly built their League1 team with players who have progressed through the club's youth teams and/ or players that are attending the University of Toronto, who they have an affiliation with. This mixture has allowed them to field a consistent starting lineup with at least ten U-23 players.

The reason behind this was explained by Hyland.

"Players, parents and clubs have invested a great amount into these players for many years, so this is their opportunity and one they are taking."

"Our kids have paid for this, so it’s going to be our kids playing in it." 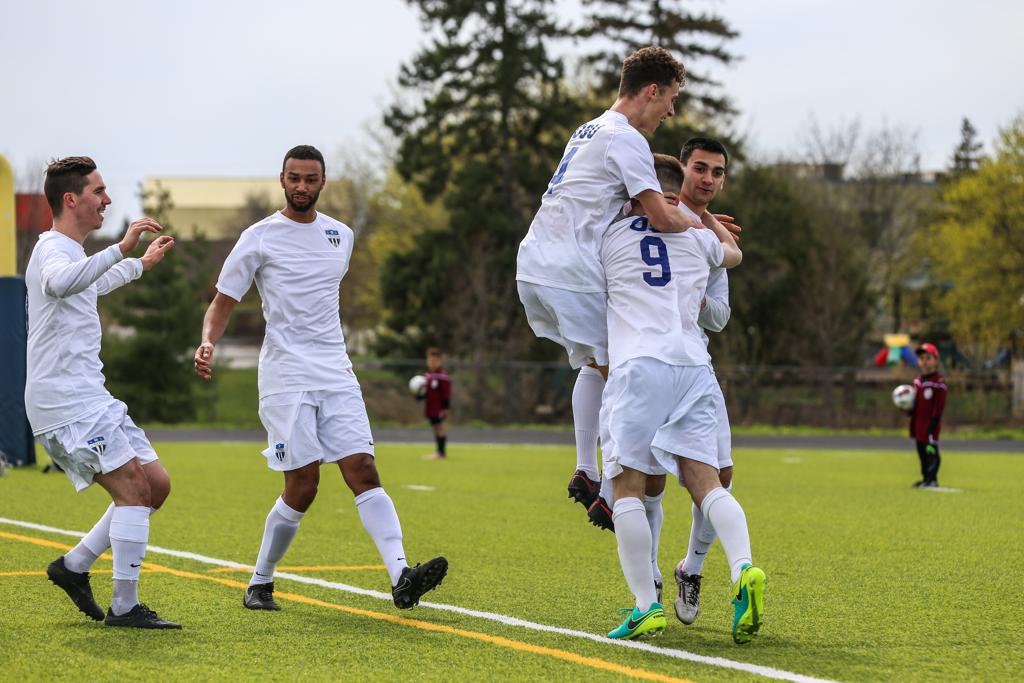 Newly expanded team Ottawa South United are similar to the Nitros, in that they are trying to promote players to League1 who have played within their youth teams.

Ottawa South is well known to put together some strong youth teams, while also being able to move some players to professional academies across North America and abroad.

Technical director Paul Harris stressed the notion that it's important to test 17 and 18 year-olds in a more physical environment, gauging their abilities against older, experienced players, as well as talented peers around their age.

The Ottawa South technical director, like Aurora's O'Keeffe, stated that results don't really show what he and his staff have implemented.

"We've always been competitive, even though we had some games where we lost by a few goals. Generally if you watch the balance of play, we're competitive," said Harris.

Harris also reiterated what Hyland and Komlodi stated, that some younger players do add a degree of vulnerability to a team.

"It's usually what you call novice or rookie mistakes that are costing them on the scoresheet," he said.

Harris added that one big reason why his club decided to field a League1 club was because members of Toronto FC said the league would allow his young team the opportunity to play against more physical and experienced players compared to ones in youth leagues.

"[Toronto FC] said we should [do] similar to what they are doing in terms of really trying to get some of these boys 17,18,19 [years old] experience against older players to help them with their future careers."

"We've had a good reputation in the last four or five years of moving players into youth academies and into pro environments. We saw League1 as a continuation of this." 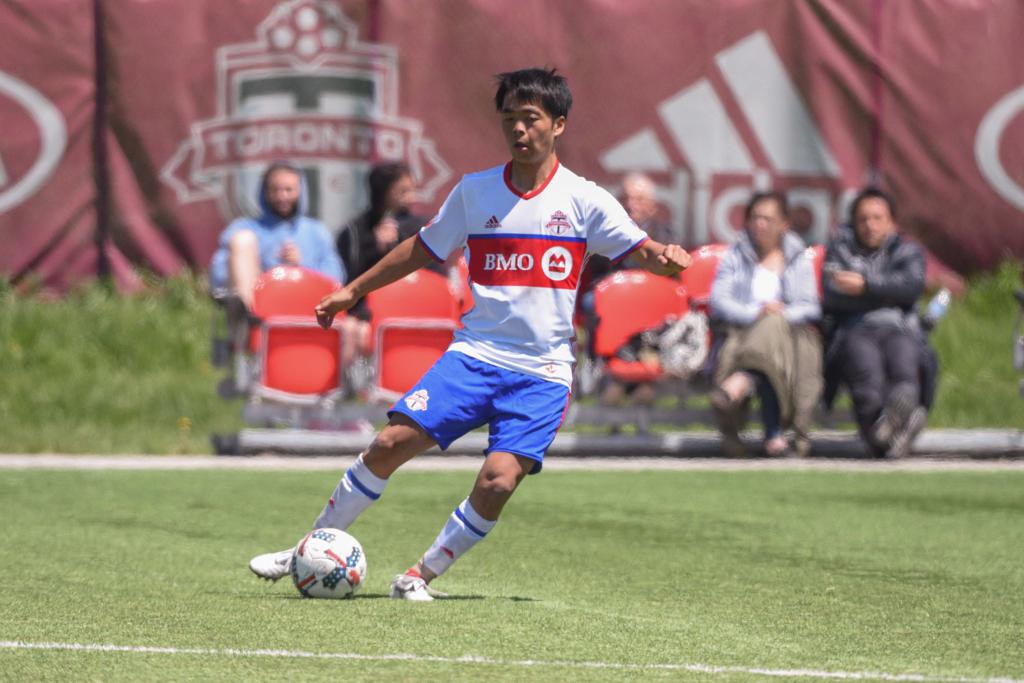 When it came time for Major League Soccer side Toronto FC to determine which league their talented youth pool would compete in, they decided that League1 Ontario was the best way their youth players could be tested against more experienced players at the Toronto FC III level.

Since 2007, Toronto FC remains the only MLS side to not field a team in the U.S Soccer Development Academy (USSDA) league. Even fellow Canadian clubs Vancouver Whitecaps and the Montreal Impact have their U-15 and U-17 teams play against MLS academies and the best U.S Soccer academies.

The Toronto based club did field a team in the now defunct MLS Reserve League, but have since shifted to having their youth sides compete against the best players in Ontario.

By doing so, the only pro academy club in League1 have been able to field some talented Canadian youth internationals in recent years. First team player Raheem Edwards comes to mind right away as a player who played in League1 before making it pro.

The same can be said about former Toronto FC players Molham Babouli and Chris Mannella, who were among the first players to climb the pathway from the club's 2014 League1 Championship team to the MLS side.

TFC III head coach Danny Dichio shares a different view than other coaches mentioned earlier. He said his squad of strictly U-23 players have handled themselves in a professional manner in each game.

"Thankfully we do not have to deal with instilling an emphasis on working hard within this group."

"They train daily for eleven months of the year, so most of them are in prime condition for their age."

Dichio mentioned that a reason why Toronto FC created a League1 team was because it was able to bridge that gap between academy and the first/ second teams. He said that he loves seeing players give it their all in League1 and challenge his young group.

"There have been some physical and tactical battles already this season that we have really enjoyed and we know every team loves playing against us."

"This is exactly what kind of environment and resistance we need for these young players." 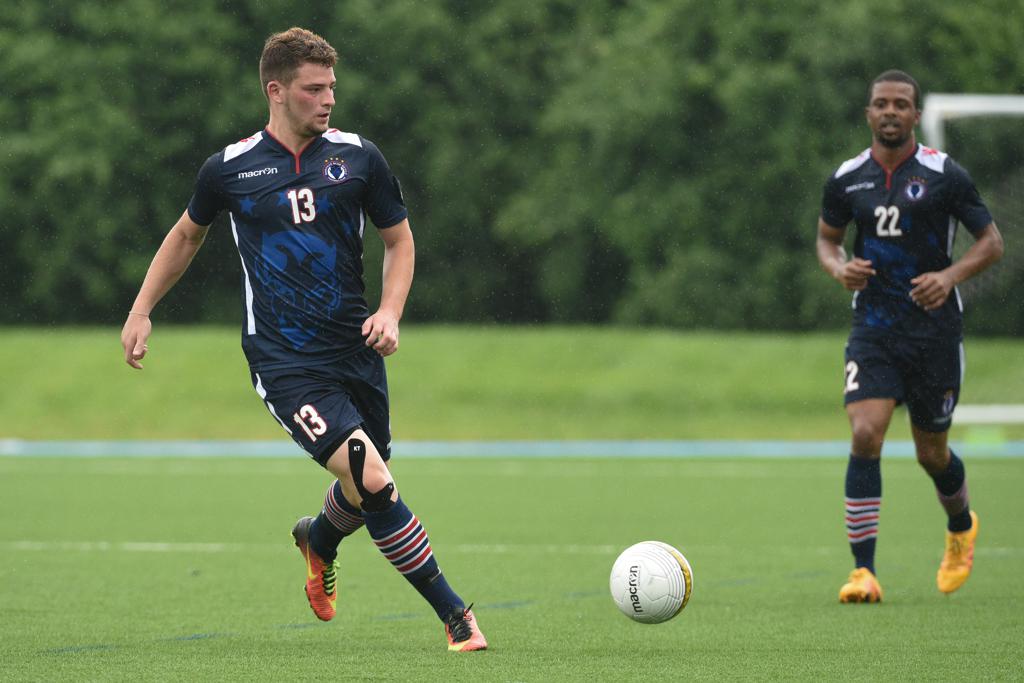 Wilde mentioned that while a team needs youth, they need experience as well.

"If you want to compete for a championship you have to [have a mixture of both]. That experience down the stretch is invaluable."

Oakville's good mixture of youth and experience is a key reason why they were crowned league champions in 2015. And Wilde brought up the fact that last year's 8W - 4D - 10L record was difficult considering they fielded more youth players that were apart of their 2016 Ontario Soccer League U-21 winning team.

"Last year we had numerous academy players playing in the league to give them that taste of what we were doing."

Even though his approach and ideals are different compared to other coaches, Wilde says his club still wants to see youths develop and take up more spots on his roster.

"We all want to see young players come through. We have a diminishing group of older players now."

"I just believe to be consistent, to be able to have cover, to be able to give these players rest from time-to-time, and to also give them the competition time they need, that has to be managed well throughout the season."