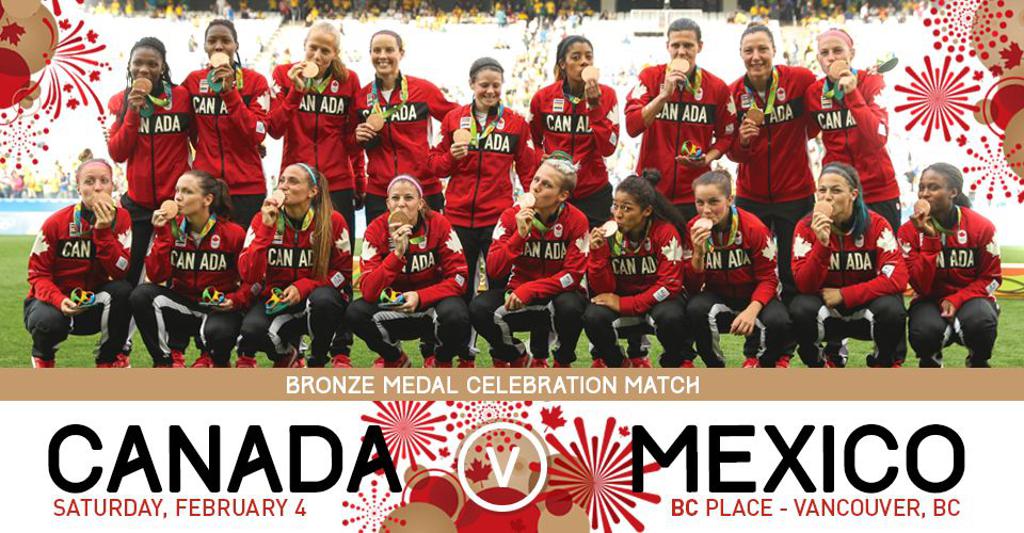 The Bronze Medal Celebration Match, which will be the first time Canada Soccer’s Women’s National Team will play at home since capturing its historic back-to-back bronze medal at the 2016 Rio Olympics, will feature members of the Olympic squad, including retiring players Melissa Tancredi, Rhian Wilkinson, and Marie-Eve Nault in their final home match for Canada.

An opportunity for fans to welcome home our Olympic soccer heroes, the Bronze Medal Celebration match will also include a presentation to the team ahead of kick-off, and recognition for the retiring players from the 2016 and 2012 Bronze Medal winning teams.

“Canadians are going to have the opportunity to be part of our homecoming celebration, which is really special for us as a team,” said Head Coach John Herdman. “This match is really a celebration of the team that captured Bronze in Rio, an achievement that was made possible partly by the commitment and grit of the three players who will be making their final appearances at home for Canada on Saturday. To be able to send them off in this way is remarkable, and something we will cherish,” said Herdman.

The roster for Canada Soccer’s Women’s National Team training camp, including the matches against Mexico, includes 19 of the 21 players who traveled to the Rio 2016 Olympic Games, and adds seven rising stars to Canada’s line up. Defenders Kadeisha Buchanan and Ashley Lawrence are unavailable for the match due to professional team commitments in France.

“We’ve just come out of an assessment camp where some young players really impressed us, so we are taking the opportunity of having two matches against Mexico to bring these young players in to our line up,” said Herdman. “We’ll be playing many players from our Olympic squad on February 4th, but it’s possible Canadians may be introduced to some young emerging Canadian stars at BC Place as well. There are few experiences like playing in front of thousands of fans at home, it’s an experience that can really shape a young footballer, so we’re hoping we can make that happen for one or two of these young players.”

With over 20,000 tickets sold, some great seats for the Canada v Mexico match are still available via Ticketmaster.ca. Tickets to the match start as low as $20 (plus applicable fees) and fans will once again be able to take advantage of a 'Me+3' offer in select sections. Groups of 10 or more are eligible for discounts of up to 30% off regular price tickets. Fans interested in group tickets must submit their order by Wednesday, February 1st.

Fans can relive Canada Soccer Women’s National Team journey on Facebook, Twitter and Instagram as Canada Soccer releases highlights and team commentary videos each day leading up to the match.

Canada Soccer’s Bronze Medal Celebration Match will be broadcast LIVE from BC Place 4 February on TSN2 and RDS2 at 15:00 PT/ 18:00 ET.