"Obviously we made it three and four and we scored three goals in the half and we beat them with only ten men. So that's a credit to the guys and that's credit to how we planned it for the second half. It's players like Jason Mills, Brandon Mills, Jarek Whiteman - all did a lot of work off the ball."

MVP of the match was Vaughan's Joseph Di Chiarra, who was integral in all four of Vaughan's goals, and was key in Vaughan's domination of central midfield.

"Yeah for sure [I'm proud of my performance]," said Di Chiarra in post-match interview. "Good individual performance on my part, I was involved in all of the goals, and the team did very well today."

"We do have a talented group. We do have a good range of experience throughout the squad," he added. "We all work hard everyday. Put in 100 per cent everyday. And it all shows on the field."

"Meaningful games - they are always important for you. Whenever there is something on the line, you have to step up and play, like today. Cup final and competitive games like that always bring out the best in players." 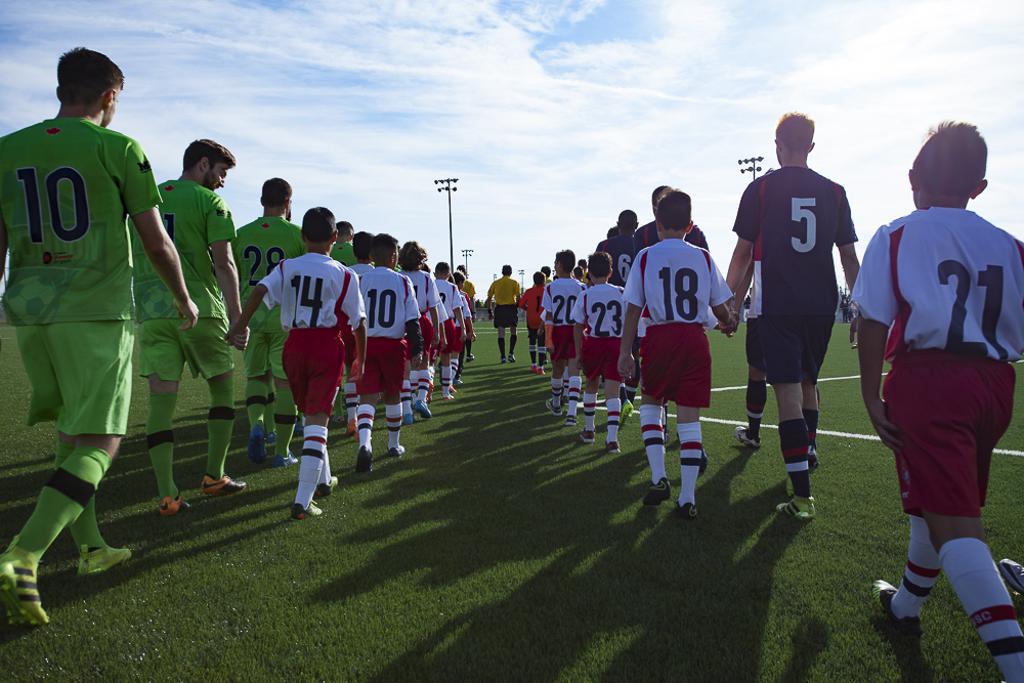 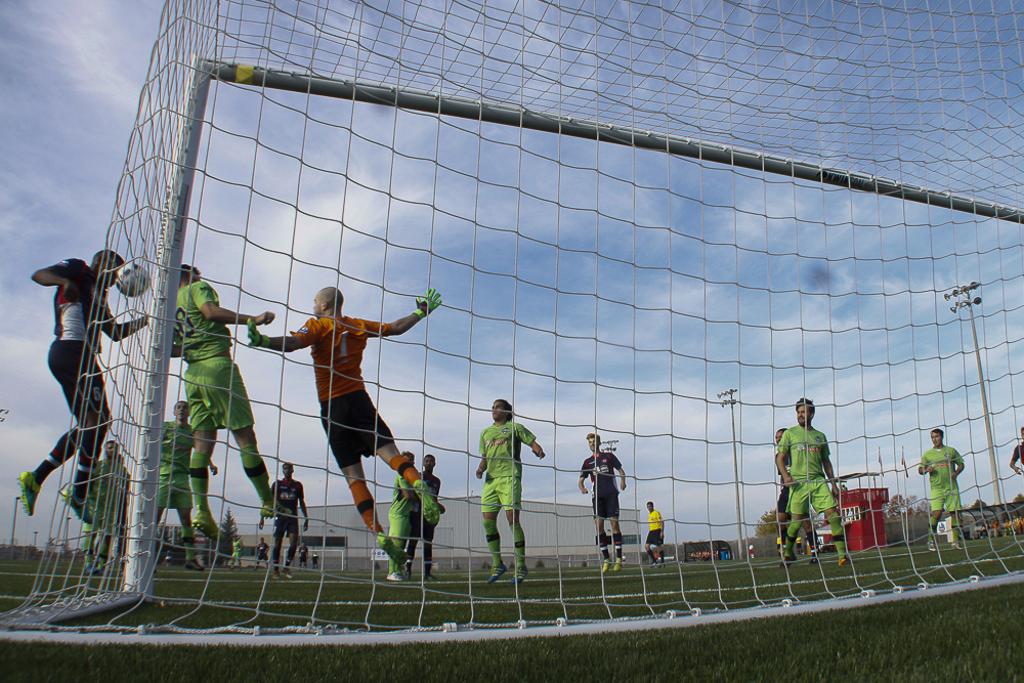 Off an early free kick, Di Chiarra dropped a perfect ball onto central back Adrian Butters' (9') head at the back post, who out-jumped his mark to finish before London goalkeeper Anthony Sokalaski could get across.

Only three minutes later, Di Chiarra was at it again, this time swinging a dangerous low ball in at near post off a corner, causing a pileup of players attempting to clear the ball. The clearance fell right to the feet of Vaughan's other central back, Daniel Gogarty (12'), who made no mistake finishing into the gaping net.

The rattle continued late in the half, as London captain Mike Marcoccia was involved in a confrontation with Vaughan's sibling trio of Jason, Brandon and Jahsua Mills. After the melee finally cleared, Jahsua Mills was dismissed for violent conduct and London appeared to have a life-line in Vaughan playing with only ten men for the remaining 45 minutes. 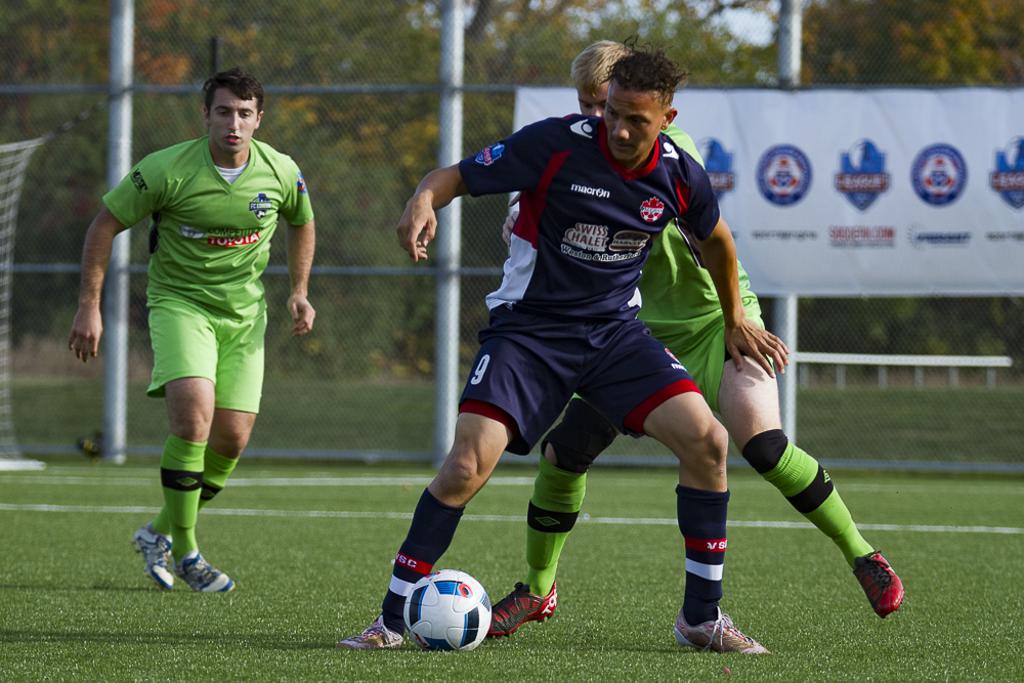 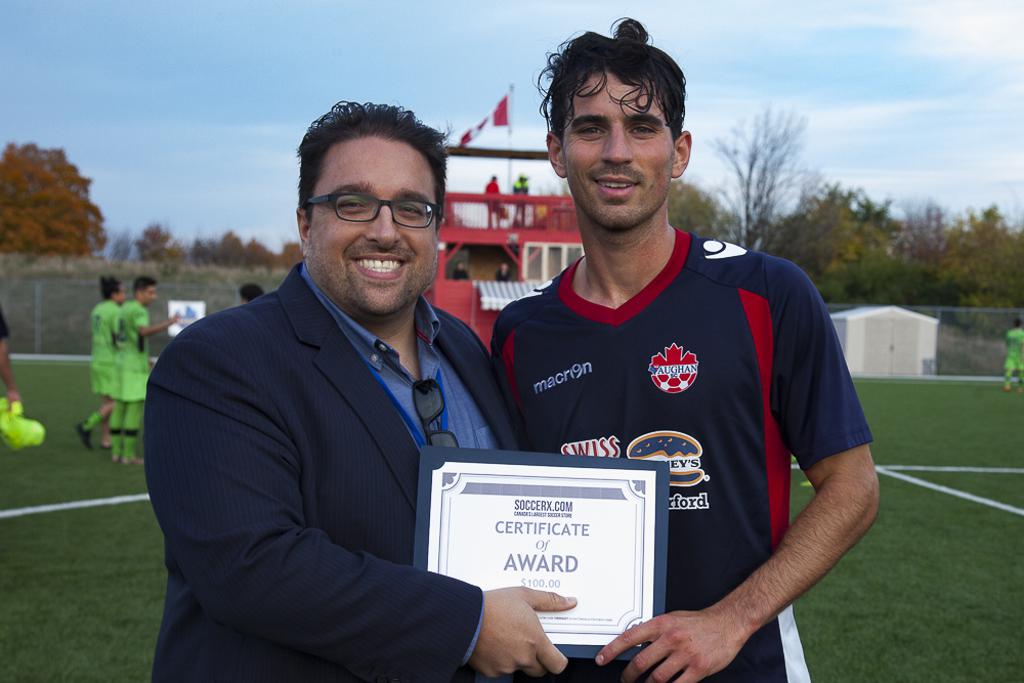 However, the script was not read by the Vaughan players, who came out for the second half with a point to prove. Alternating between an aggressive 4-2-3 formation in possession, and a hard-working 4-4-1 out of possession, the Azzurri kept the pressure on London.

Their industry paid off early, as forward Mario Kovacevic (52') met another Di Chiarra corner with a glancing header that nudged in off the far post to give Vaughan a three goal lead.

Vaughan regular season leading scorer Jarek Whiteman (68') was the next to get on the score sheet, benefitting from some tidy combination play. Di Chiarra slipped a slide-rule pass between London defenders, with Kovacevic providing a timely dummy, leaving the mobile Whiteman clear in behind the London defence. Whiteman made no mistake, stroking the finish hard and low under the diving Sokalaski. 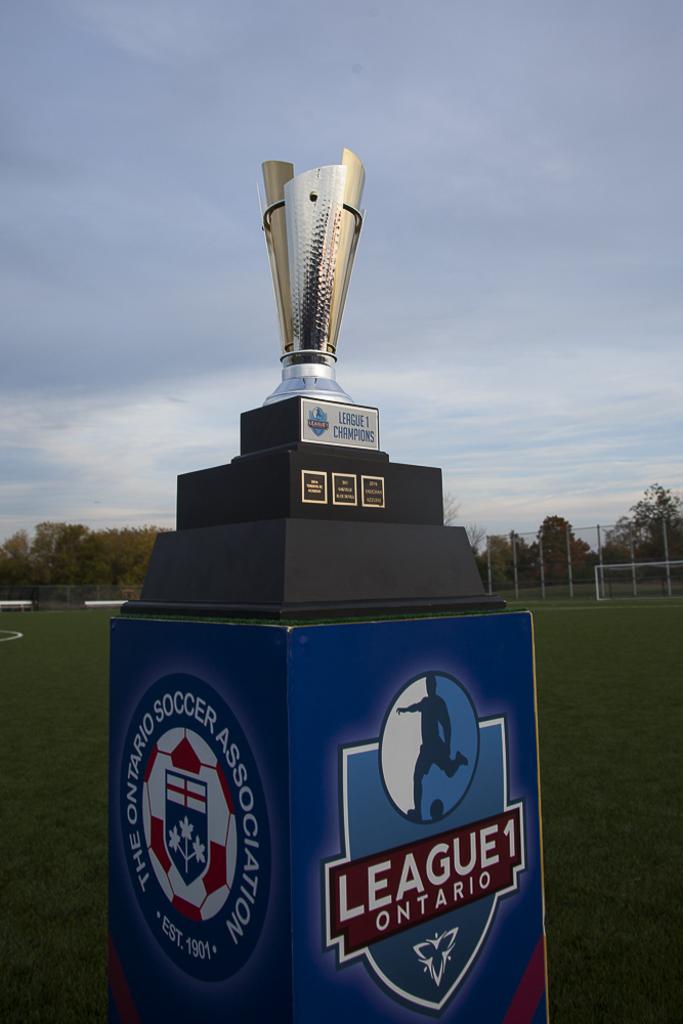 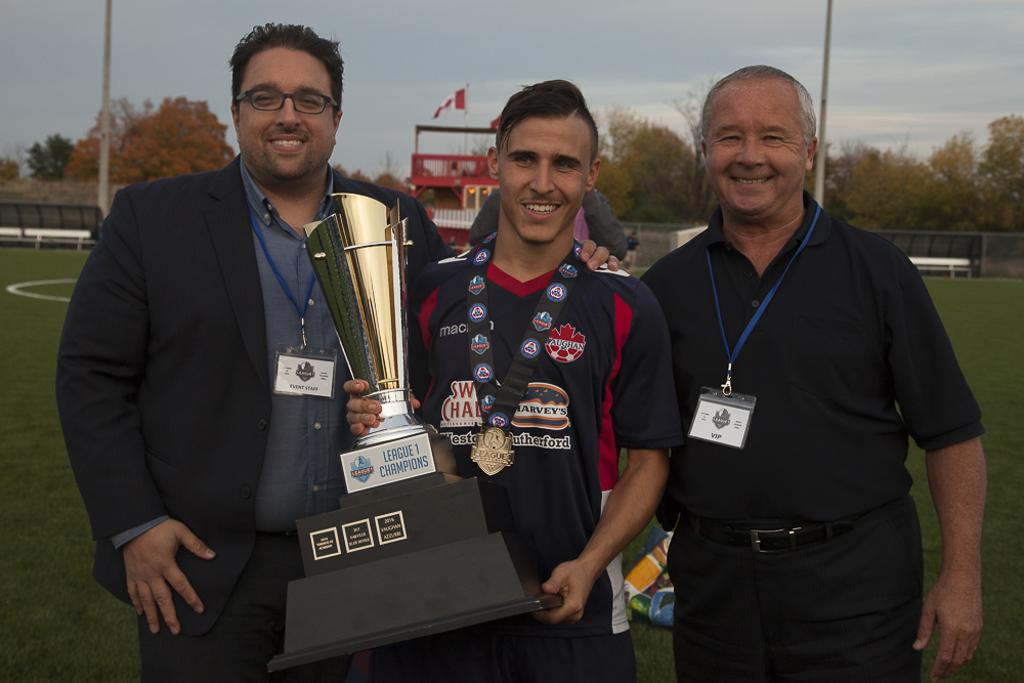 At four goals, the result appeared guaranteed for the Azzurri - but it was London that did not read the script on this occasion.

Forward Mohammed Reza Nafar (71') had shown great technical ability throughout the match, and earned his opportunity with a well-timed run in behind the Vaughan defence to get first touch on a ball that eluded Vaughan keeper Colm Vance.

With some resolve and never say die attitude behind them, and Vaughan fatigue beginning to show, London poured on the pressure. The crowd were buoyant when League1 2016 Golden Boot winner Elvir Gigolaj (80') found the net for a second London goal less than ten minutes after the first

A tense finish ensued, with coaches, substitutes, and a rampant crowd roaring on their respective teams, but Vaughan held firm to the final whistle. 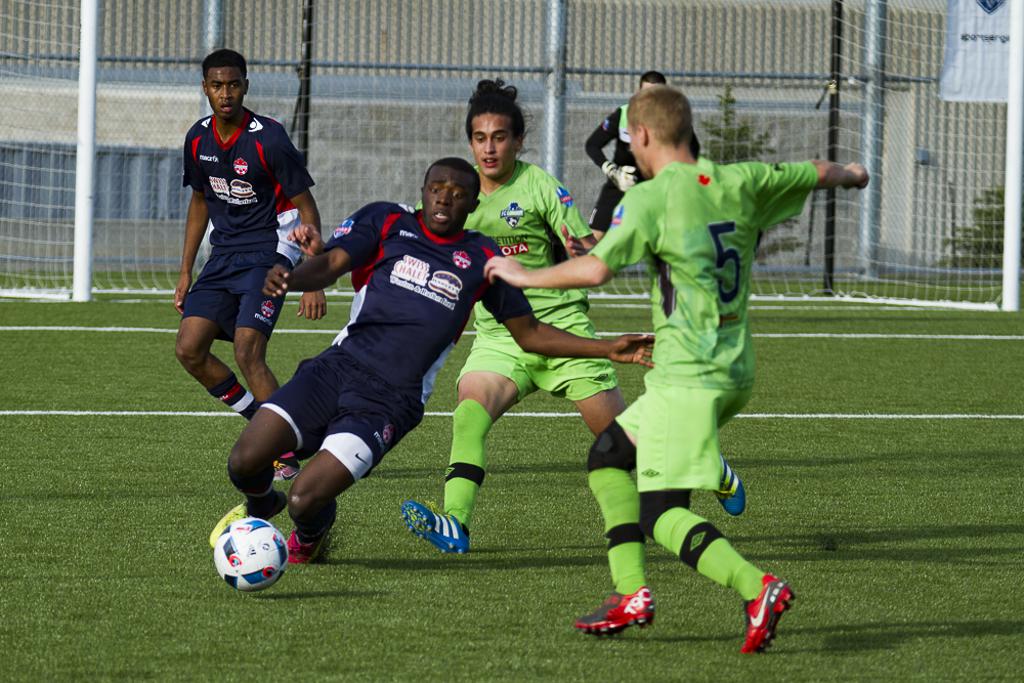 "I'm disappointed at the moment," said London captain, Mike Marcoccia. "But I am still happy with our season as a whole. We've had to overcome some obstacles this season and we've had plenty of good results."

"Obviously we had a game plan that we wanted to execute in the second half and we felt like we did a decent job in the first. We conceded on set pieces and that's a difficult thing to do in a final."

"We tried to open them up and take advantage of them having ten men but they good a job of defending and ultimately it wasn't the result we were looking for."

"I think we did well, though. Soccer is the only sport in the world where you can be the better team and lose by mistake. It was set pieces that cost us today. Congratulations to Vaughan. But that was one of our weaknesses this season, the set pieces."

The Azzurri will now compete for the Canadian Division III title with CS Mont-Royal Outremont Griffons - the champions of the Quebec PLSQ semi-pro league - in a home and away series on November 5 and 12.

"For sure, its going to be an exciting game to go over there and Quebec, have a home and away fixture against them," concluded Di Chiarra. "It should be nice."

Stay tuned to www.league1ontario.com for Inter-Provincial event and Livestream details! 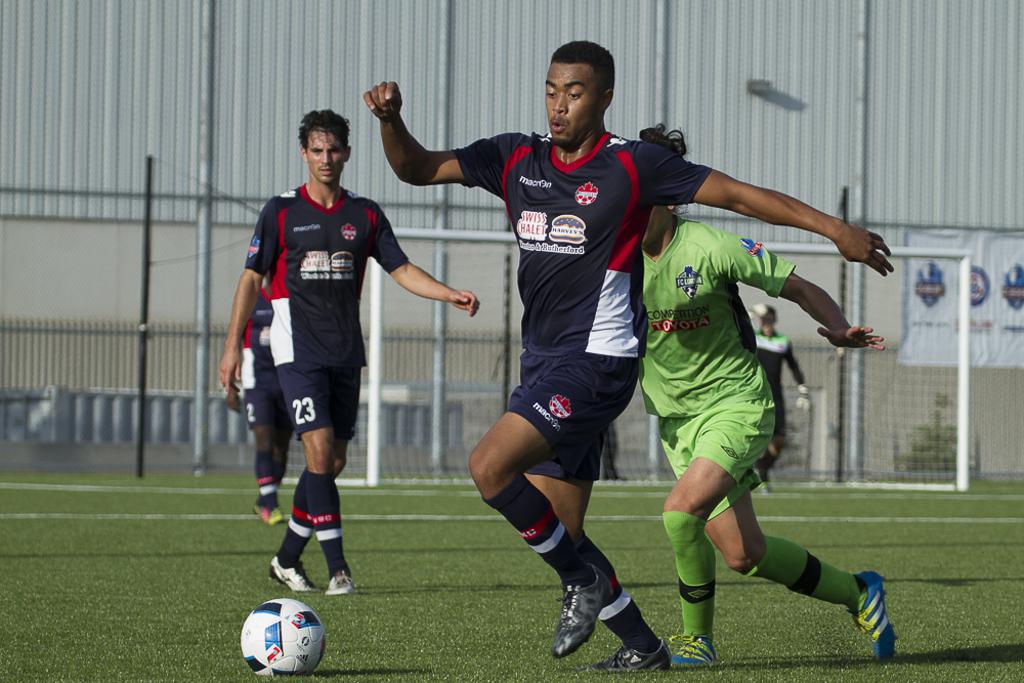 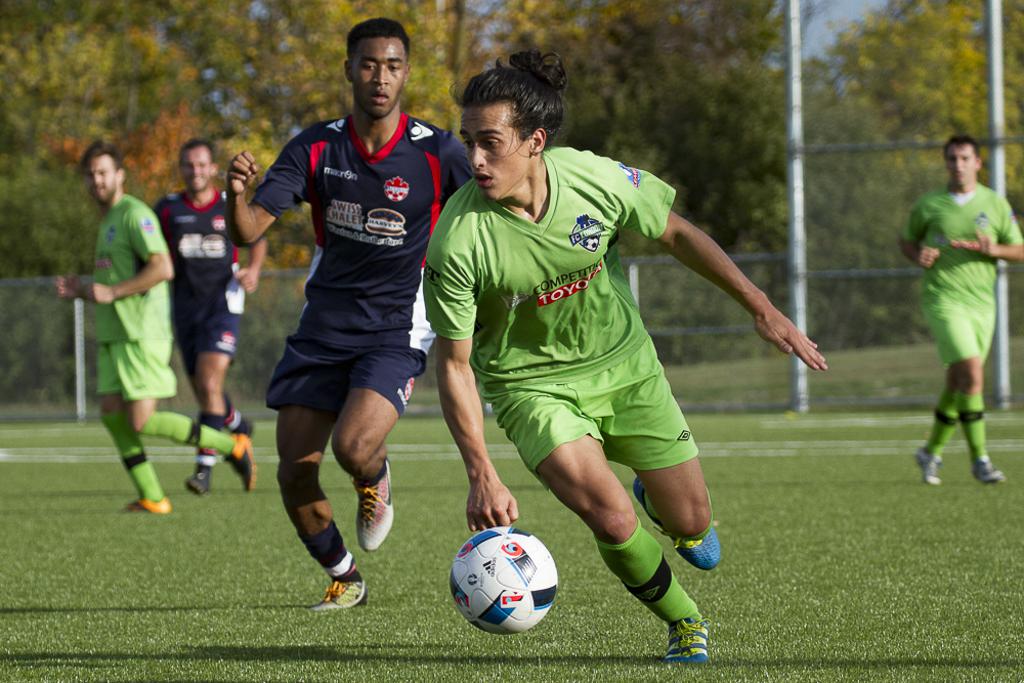