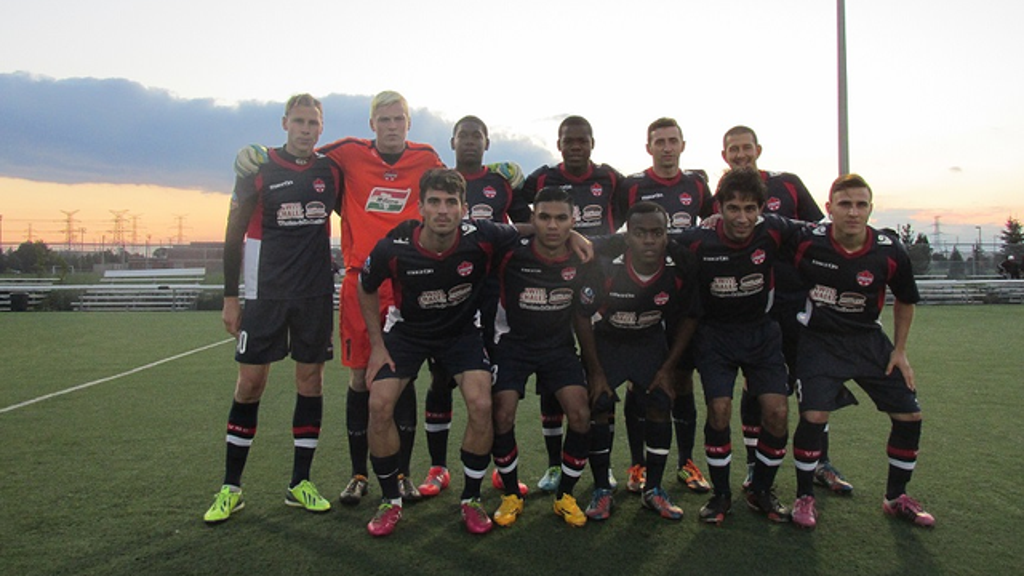 Vaughan Azzurri had a chance to make a statement in their quest for the League1 Ontario Cup on Saturday night at the Ontario Soccer Centre.

And the Azzurri didn’t disappoint, handing the visiting Windsor Stars a 5-0 thumping and putting themselves in the Group B driver’s seat with a makeup game to play.

Azzurri are level with Sigma FC on seven points at the top of the group. The win means Woodbridge and Windsor are both out of contention, though Master’s FA Saints, who must still play Vaughan in that makeup match, and could draw level with the leaders if they beat the Azzurri. A point would mean Vaughan and Sigma go through.

Man-of-the-match Darren Gertiesingh scored twice for the victors, the second goal a pretty one in the six-yard-box after he rounded the defender with close control and blasted home.

Carlos Nogueira had the other early goal for Vaughan, while goal poacher Andrew Ornoch scored a nice volley at the end of the first half to make it 4-0, and effectively kill the game off in favour of Vaughan.

Ilya Orlov scored the game's only second half goal for Vaughan, who had little trouble with Windsor.

Patrice Gheisar, assistant coach of Vaughan, said, "it was great, we had a lot of the younger guys who came out. We were very sharp the first half. We achieved our goal of keeping the ball, rotating our point of attack and finishing our chances."

"In the last goal of the first half (Ornoch's volley goal) there were five different players involved in the build-up, and that just goes to show how fantastic it was,” said Gheisar.

The goal by Orlov came off a nice set piece from a corner kick that came off just like you draw them up on the training pitch.

“It doesn’t always happen the way you draw them up, but when it happens it makes you feel good,” said Gheisar.

The two teams that come out of Group B (yet to be determined from among Vaughan, Sigma FC and Masters FA Saints) will face Toronto FC Academy and Durham United FC near the end of next week on Oct. 14 and 15 with a rain date set for Oct. 16.

The Ontario League1 Cup Final is set for BMO Field in Toronto for Sunday, Oct. 19.