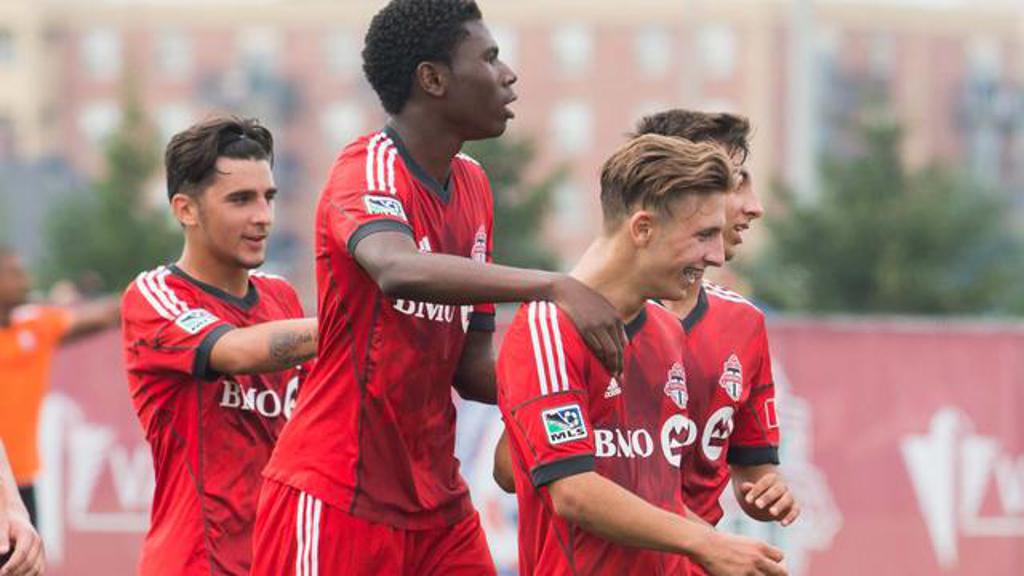 In front of a crowd of approximately 200 people at the Oshawa Civic Centre facility, Durham United and Toronto FC Academy engaged in a six goal thriller with a result that could have gone either way.

Toronto FC Academy started the brighter of the two sides - and eventually ran out worthy 4-2 victors - but the home side's never-say-die attitude meant there was always the chance of a late revival.

Both teams began the match with a frenetic pace, giving little space in defence and attempting to play with a tempo in possession that often meant poor first touches, and cheaply conceded interceptions. 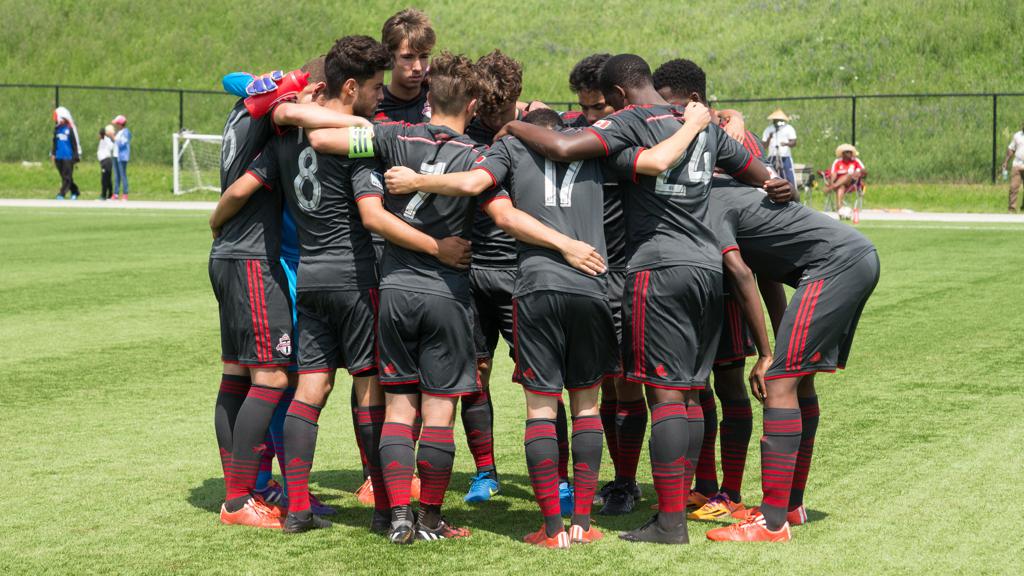 Junior Reds looked the more capable of the two sides to handle the speed of play, however, and in the 14th minute the away side broke the host's offside trap via central midfielder Nicholas Osorio overlapping in the wide right channel.

While the Durham players halted runs to remonstrate with the officials, Osorio placed a perfect cutback into the path of the winger that had made space for him on the flank; Alexander Pena took the ball just inside the box, expertly slicing his finish across Durham keeper Eugene Alves to nestle inside the post's side netting.

If Durham were daunted, they didn't show it. Right winger Joseph Roccasalva, central midfielder Christian Moncrieffe, and central forward Kashiff De Jonge combined positively over the ensuing twenty minutes. Yet it was a case of all build-up and no finish for these Durham moves.

Moncrieffe couldn't keep a golden opportunity from 20 yards beneath the bar, while De Jonge seemed to get his feet tangled after Roccasalva sent him in alone on TFCA keeper Brogan Engbers, eventually poking the ball achingly wide of the near post. 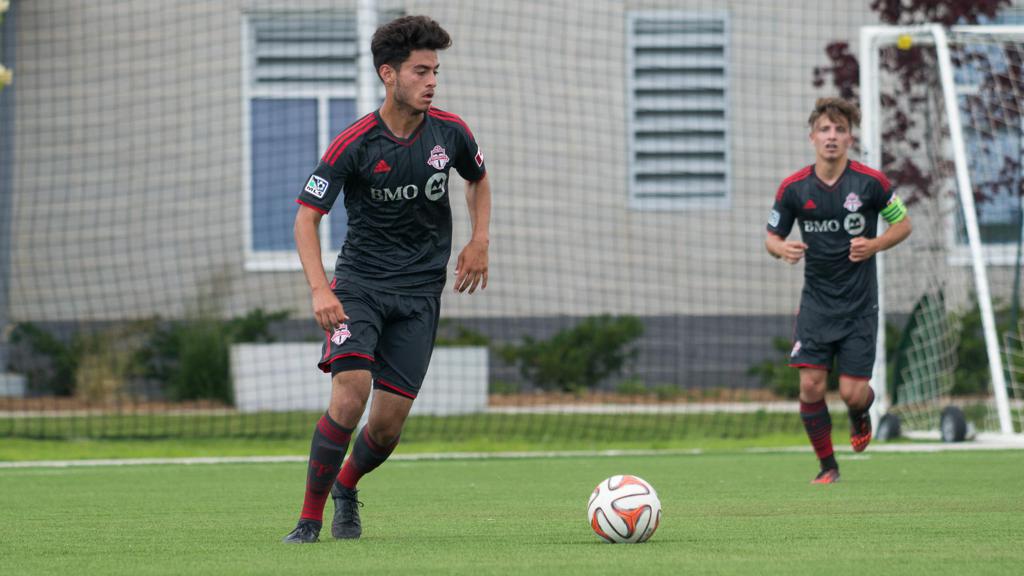 The introduction of Durham's Justin Gordon on the right wing clearly signalled the home side's intention to fight fire with fire. In his first four minutes on the pitch, Gordon's pace and willingness to drive through the wide channels had created two excellent crosses and forced a corner. TFCA left-back Leonard Sohn appeared to have his hands full with Gordon, but with very little anticipation and movement from Gordon's forward teammates there was little at the end of Durham's best threat. 1-0 to TFCA at the break.

Toronto FC's half-time substitution of Martin Srbely for goalscorer Alexander Pena marked a change in tactics for the Reds, whether by accident or design is unclear.

Although Srbely took up a role behind the forward Richie Ennin, as Alexander Zis had done in the first half, Srbely proceeded to play more like a second forward than his deeper-lying predecessor. Srbely, Ennin, and left winger Cyrus Rollocks would switch positions at will, but each one ran at the defensive line with a growing pace and menace. 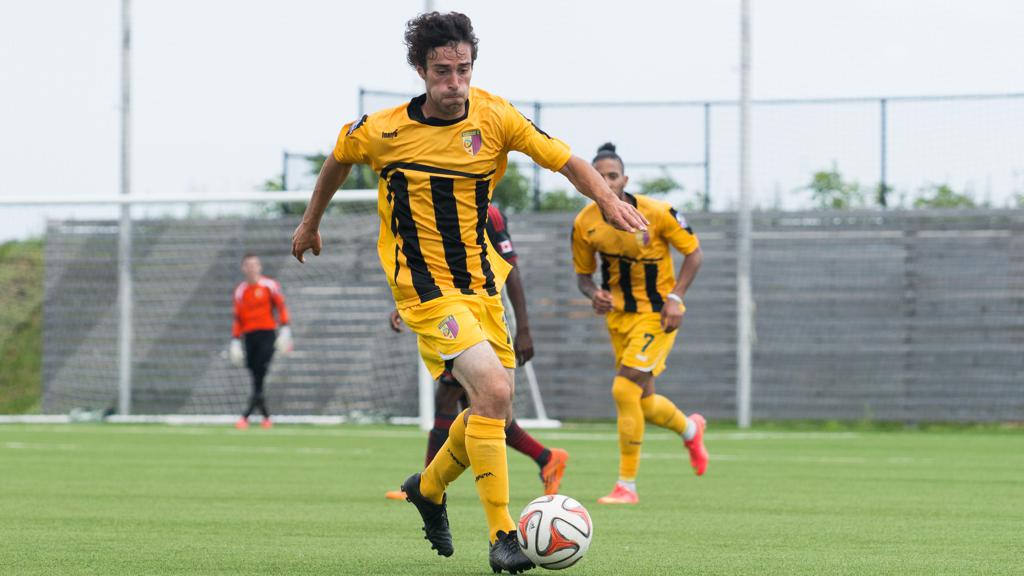 Only TFCA's right flank held shape to start the half, with the combo of Zis and overlapping full-back Steven Furlano offering an easy outlet over the top for service from central mids' Aidan Daniels and Nicholas Osorio.

Suddenly, Durham defenders could only follow shadows of movement, and TFCA seemed to unlock the final third with every forward pass. 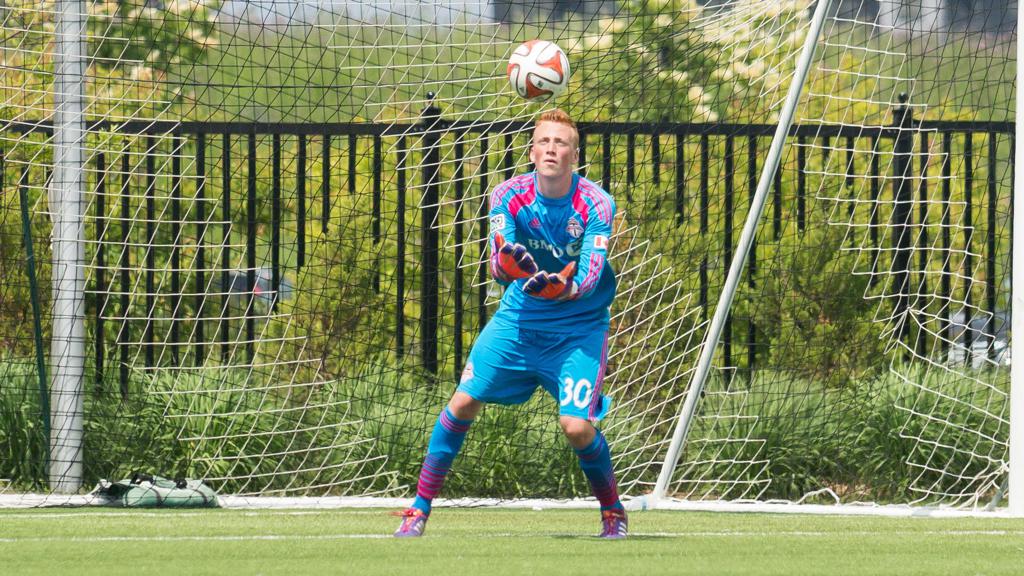 Predictably, it would be the omni-present threat of Ennin to put the away side up 2-1 in the 53rd minute, with a calmly taken left footed strike from 12 yards out. Durham's De Jonge had just fashioned one of the best chances of the game on a counter, but Engbers was up to task and, upon saving the Durham effort, released TFCA's fluid attack with excellent distribution, countering the counter. Four touches later and the ball was in the back of Durham's net.

The match would continue in such a manner, with pace on both sides attempting to counter error-prone attacks as quickly as possible. Increasingly, TFCA's dominance of the ball, and peppiness in attack, was also marked by an obvious drop in discipline. 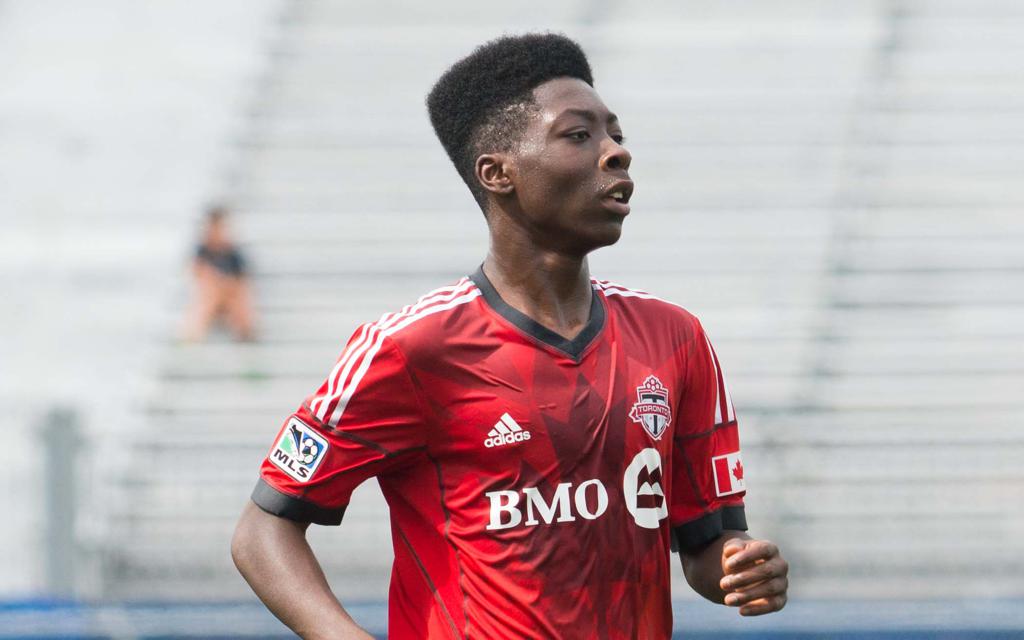 As Durham players committed fouls in tracking their pacey marks, TFCA players began to show unnecessary frustration and emotional outburst at the tackles, then overplaying on the ball and initiating welcome counter-attacks for Durham. The default setting of driving run after driving run was a pure risk for TFCA, and the attackers simply didn't put away enough chances to justify the approach.

As the old maxim of "if you don't score, you get scored upon" dictates, Durham's De Jonge would get Durham's first goal against the run of play in the 72nd minute, closing the gap to 2-1. A comeback appeared to be on. 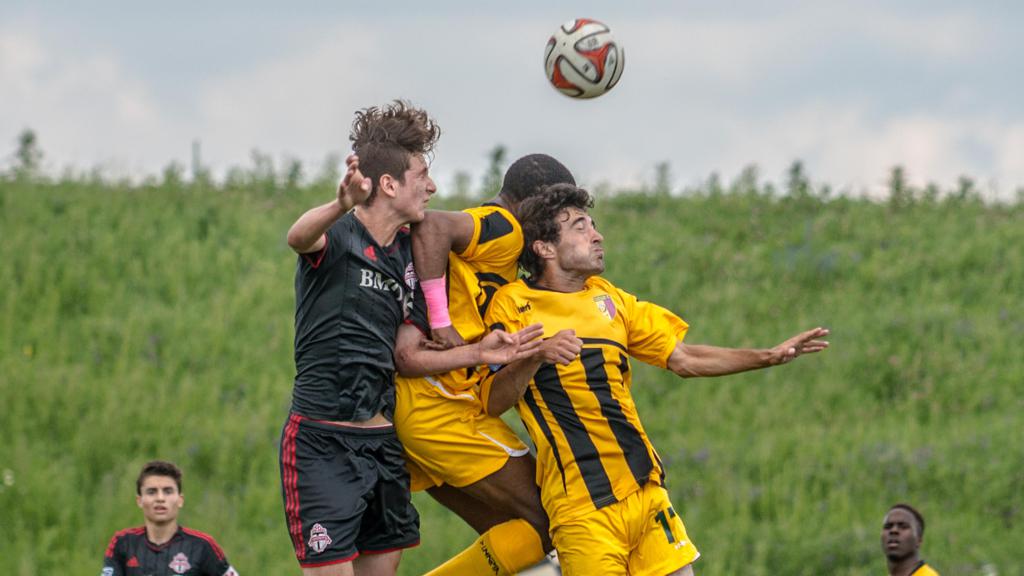 But TFCA instantly showed their mettle, capitalizing on a 74th minute scrappy finish from Rollocks that demonstrated more determination than guile.

TFCA sub Martin Davis showed he had more than a bit of both in his 83rd minute goal - a thing of beauty that began with the right winger at standstill on the line, before a feint, shimmy, and change of pace took him past three defenders and the over-committed Alves at near post.

Davis appeared to have done too much, seemed to be running into a defensive block in the middle of the penalty box, but somehow the winger managed to turn on his heel and calmly poke the ball home past an Alves sprawling to far post in recovery. A highlight reel solo goal of the highest quality, and 4-1 to the visitors with under ten minutes remaining. 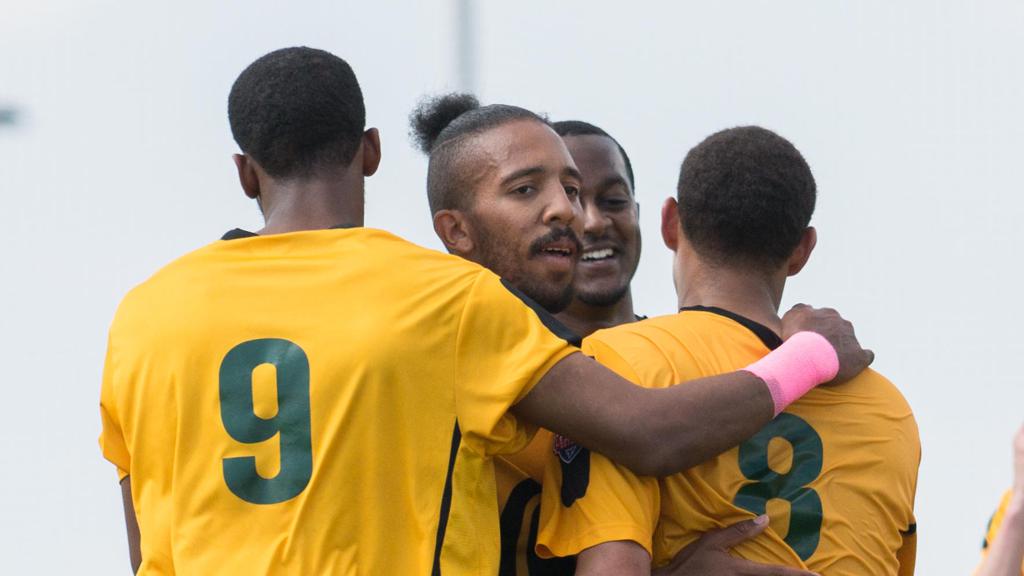 If onlookers thought the drama was over, they were wrong. Durham substitute Mark Tarazhi was introduced in the 85th minute and scored on a header in the 86th - his first touch of the game, the free header at back post on a Durham corner was inexplicable.

Tarazhi appeared to have duplicated the feat in the fourth minute of extra time, again coming up unmarked at the back post and finishing, but the assistant official had spied the tightest of offside margins. A minute later the final whistle sounded, but for the neutral another 90 minutes would have been justified. 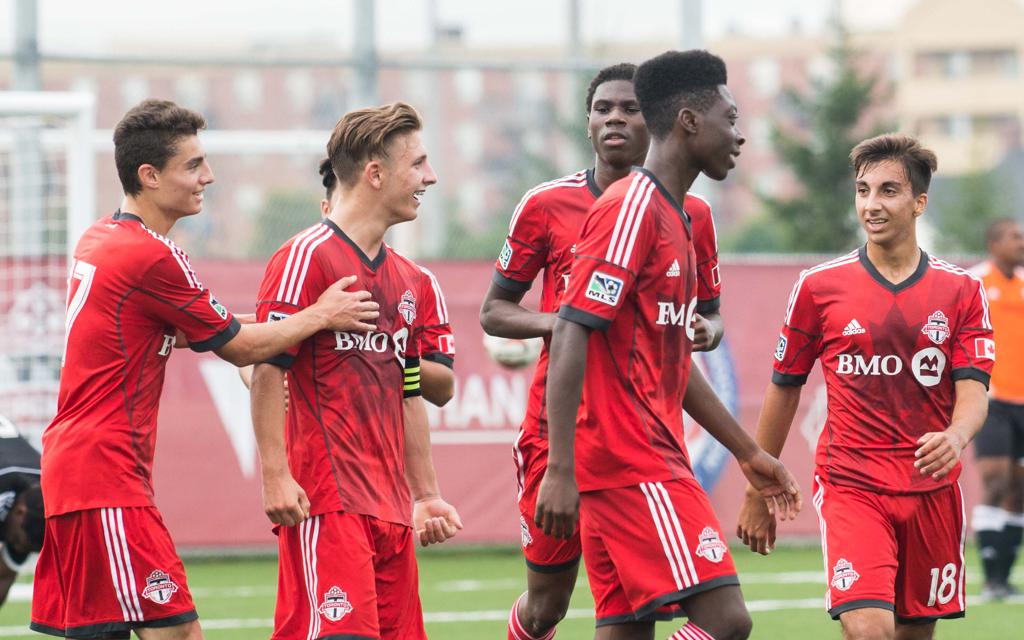 Durham United F.C. is back in action on Friday September 11 at Kinsmen Park, Pickering, vs. Master's FA Saints - 8 p.m. kickoff.