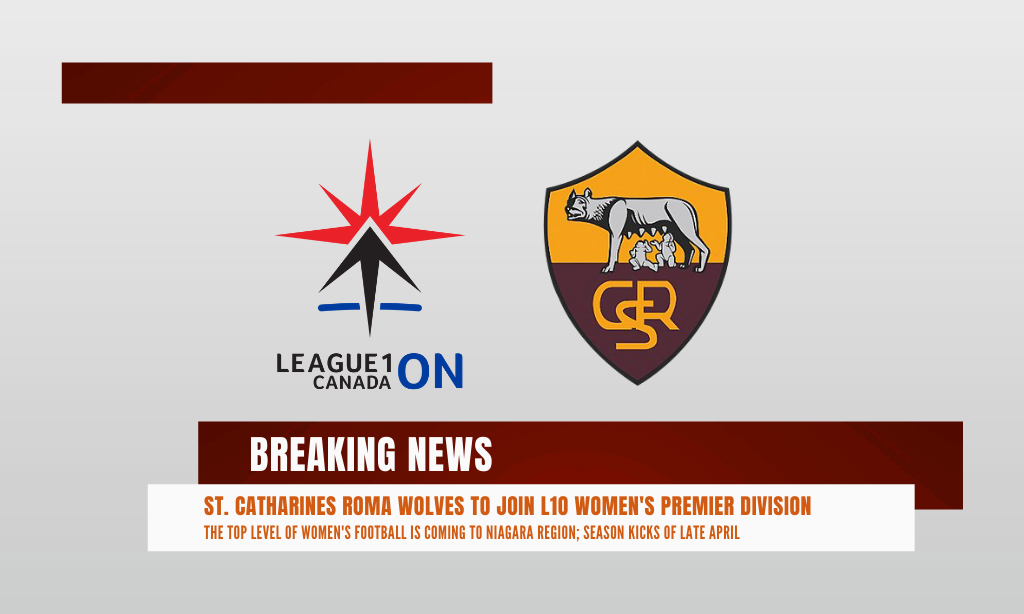 Just seven months after their Men’s team made its League1 Ontario debut in front of an enthusiastic home crowd, marking the return of Pro-Am senior soccer to Niagara Region, St. Catharines Roma Wolves is now bringing the highest level of Women’s soccer to their community, having been awarded a license to join the L1O Women’s Premier Division in time for the upcoming 2022 season.

St. Catharines Roma Wolves was founded in 1967 and over those fifty five years they have earned the distinction of being one of the most venerable clubs in the province.

On the back of the Wolves’ solid debut season during the pandemic impacted 2021 season, the club leadership notified L1O Managing Director, Matthew Braithwaite, of their intentions to exercise its option to join the Women’s competition.

“Our community has truly embraced the return of this level of soccer,” said Carmine Provenzano, Club Roma’s L1O Program Head of Operations. “Our club has been preparing for this opportunity from the day we first approached League1 Ontario and are extremely pleased and excited to bring League1 Ontario Women's Premier Division soccer to the Niagara Region.”

The Niagara Region has long been a hotbed of women’s soccer in the province of Ontario, boasting stars like Welland, Ontario native Sabrina D’Angelo, who represented Canada at the 2019 Women’s World Cup and currently plies her trade with Vittsjö GIK in Sweden.

However, a lack of top level competition at the senior level has resulted in many of the region’s brightest young talents to seek opportunities in neighbouring regions, including crossing the border to play their club soccer in the United States.

Provenzano is confident that a League1 Ontario Women’s team will inspire and excite young women from across Niagara Region with the opportunity to line up against the province’s top sides and represent their community.   He also believes that the region’s soccer community will coalesce around this team and lend it their full support.

“This is a new chapter for the region and for the St. Catharines Roma Wolves. Our vision has always been to empower women in the game they love.”  Provenzano added, “This is the first team of its kind, not only at Club Roma but for Niagara as a whole, in which the region’s most elite women can showcase right here at home at this type of level of competition.”

The club has assembled a talented coaching staff, led by Club Roma Soccer Technical Director Davide Massafra, will serve as the inaugural Head Coach and he has tapped club legend and former Canadian Men’s National Team player Lucio Ianiero to join the staff as his lead assistant.  Ianiero was most recently Head Coach for the Brock University Men’s and Women’s soccer program.

Our coaching staff bring a wealth of knowledge and experience in the Women's game at an elite level,” said Provenzano. “They will give us a tremendous head start as we look to build a very strong team for our debut season.”

One thing is for certain.  Game Day at Club Roma Park is an exciting celebration of “The Beautiful Game” and the club intends to carry over the match day experience they created for their Men’s team in 2021 to the new Women’s team this season.

“Our plan is play Friday night, under the lights at Roma Park, as much as we can,” said Provenzano. “We want to energize our team with enthusiastic crowds and make our home field a difficult place to play for visitors.”

For more information about St. Catharines Roma Wolves and upcoming open trial opportunities, please visit www.stcromawolves.com or find them on Instagram and Twitter (@stcromawolvesl1 on both platforms).