As voted by their peers, these six individual awards – split between East Conference and West Conference, and the yearly East and West best XIs see the L1O’s best recognized for their efforts during a condensed 2021 campaign. 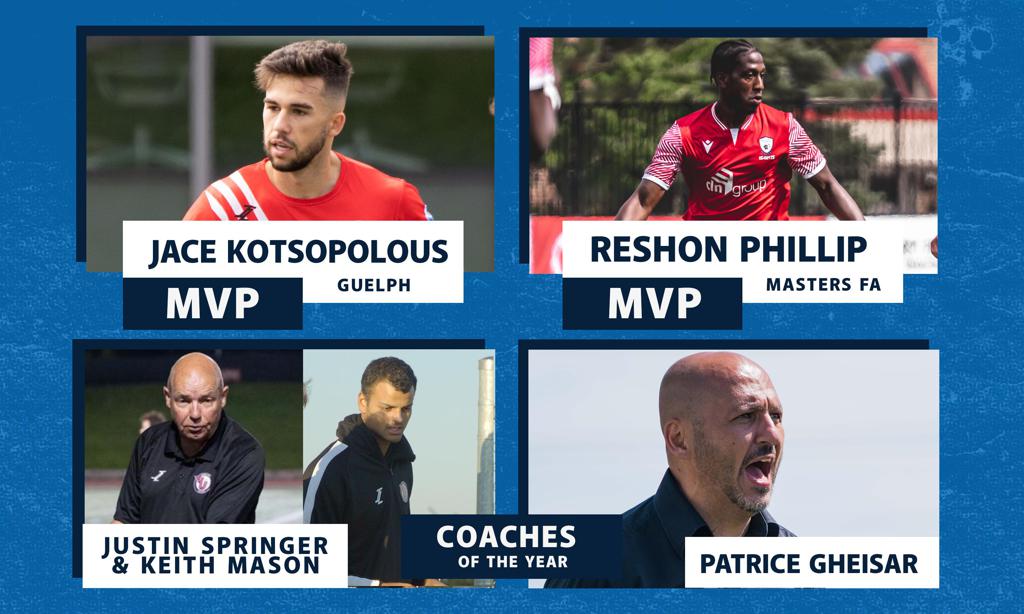 It’s hard to see even a team like Guelph United – worthy winners of the 2021 L1O Championship – hit the heights they did without their star striker Jace Kotsopoulos: 18 goals in 14 matches, three hattricks, and three goals in the playoffs – including a clutch brace in the final vs. Blue Devils FC. The former CPL attacker was nothing short of brilliant in attack and it’s been well rewarded.

Phillip bet on himself in 2021 and it paid off in a major way. Starting the season with Blue Devils, the 22-year-old former Toronto FC II forward swapped blue for Masters FA red and never looked back, scoring 13 goals in 10 matches – including twice against eventual champions Guelph United in the playoffs – in a blistering two-month run.

Guelph United’s pair of University of Guelph legends made an exceptional managerial unit in 2021 – starting with the expansion club’s opening six-match win streak that ended with a +23 goal differential. They managed momentum, and some crucial injuries, right up to the L1O Final where their side looked comfortable throughout, capturing the title with relative ease in a 3-1 win.

Gheisar’s season at the helm of Vaughan Azzurri was simply brilliant – even with the stumble in the playoffs. Vaughan ended the regular season with an undefeated record of 11-0-1 while posting a league-best +30 goal differential and 11 goals conceded. Worthy champions of the regular season. 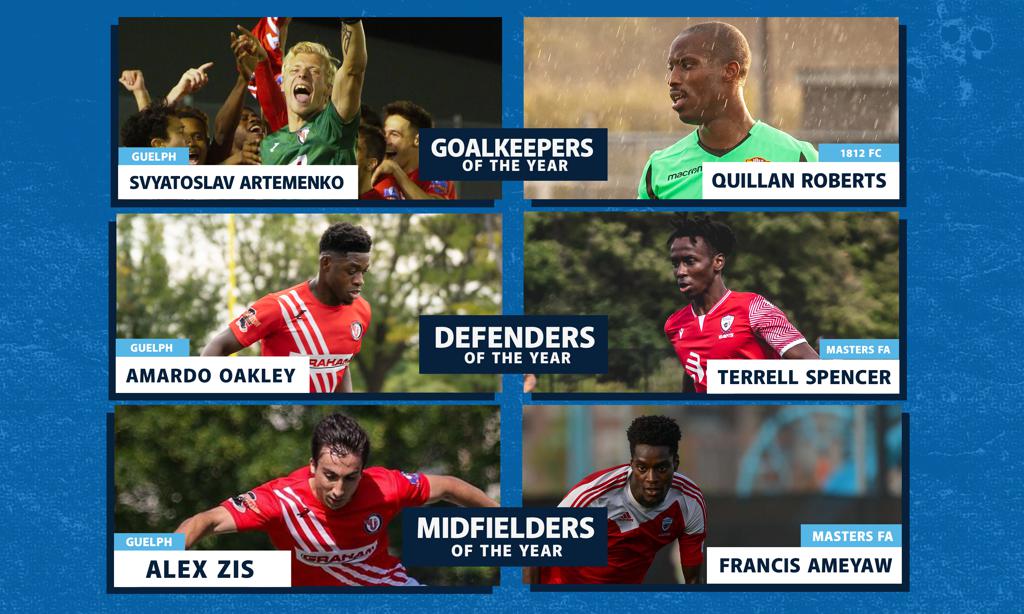 Guelph’s number one ‘keeper held firm right up to the 2021 L1O Championship, posting a league-best five clean sheets on the way. The Winnipeg native was especially clutch in the semi-final round against Masters FA where he scored and saved the all-keeper final round to send his side to the final.

The former Toronto FC and Forge FC backstop thrived with the expansion 1812 FC side, starting all 12 matches and coming up with many massive saves along the way.

Oakley was a crucial right fullback for Guelph throughout the season as he racked up an impressive 1215 minutes – bested in L1O only by MVP teammate Kotsopoulos. The rangy wingback delivered some killer balls and proved difficult to beat both on the overlap and going backwards.

Spencer was ever-present for Masters up the left side of the defence, starting every match – including their CanChamp game against York United – a sturdy defender with a solid delivery and attacking nohow, leading to a respectable two goals.

What could have been for Guelph United if their star attacking midfielder avoided injury late in the season? The former CPL-U SPORTS Draft pick has posted an astounding eight goals in eight games in September – a run rivalling the team’s other star high-powered attackers in Tomasz Skublak and Kotsopoulos – before he was sidelined with an injury.

Masters’ tricky attacker was potent as ever, mixing physicality, speed, and vision to take over matches at times. The 22-year-old was recognized by his peers for exactly that – taking a worthy nod from the East and a spot in the Best XI... 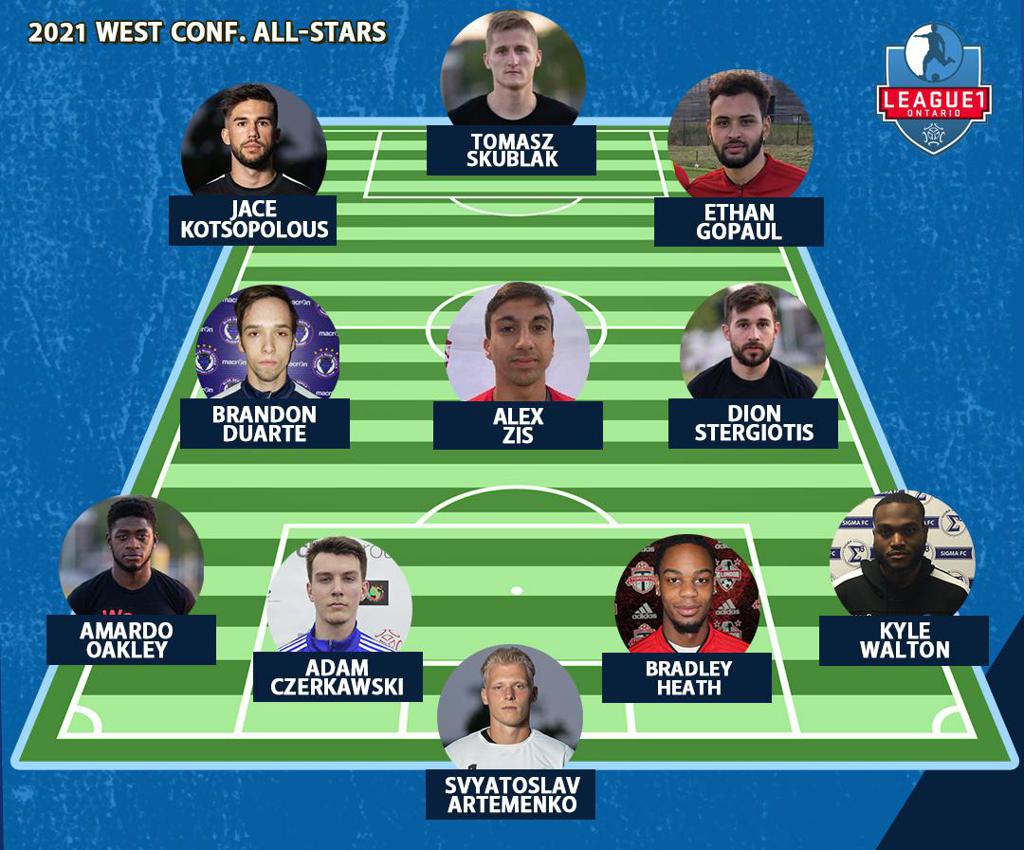 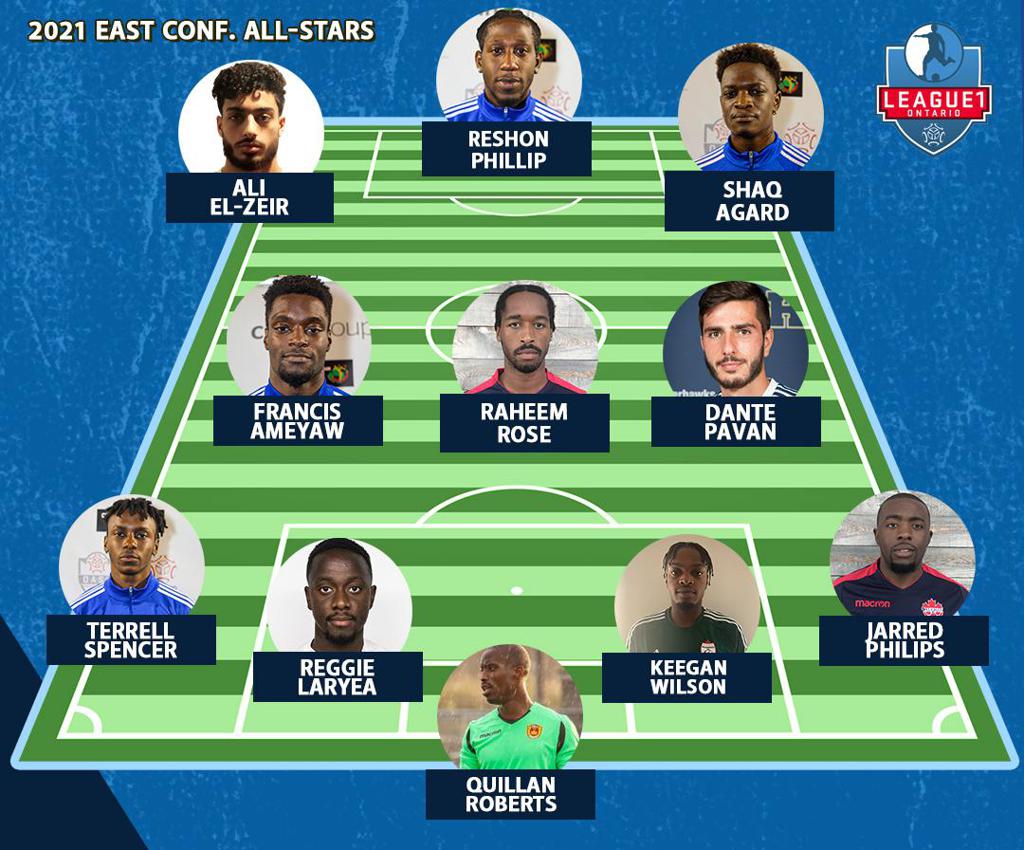