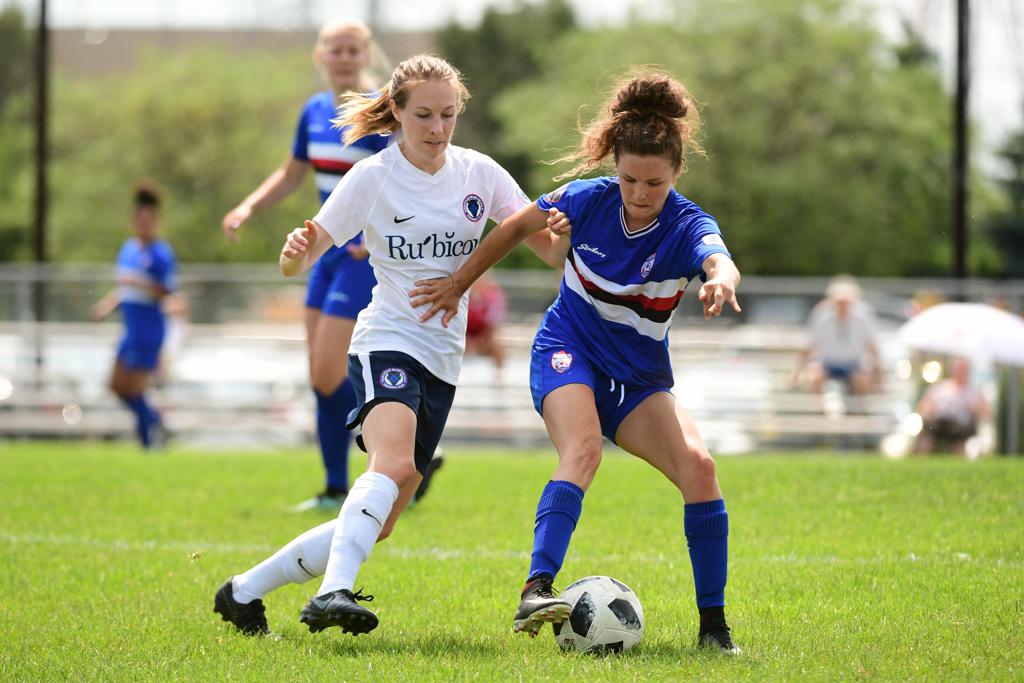 Both sides arrive looking for their first titles despite being competitive near the top of the women’s division since it was formed in 2015.

The Blue Devils come into Sunday’s match with some serious momentum after dispatching top-seeded FC London 2-1 in the semi-final. The sides were tied 1-1 before L1O veteran Laura Twidle converted in the 71st minute – a goal that was enough to send the Oakville-based team to their second consecutive L1O Women’s Premier Finals appearance and beat the team that took them down in the 2019 edition. It was a righteous victory for the fourth seed in the playoffs, as they earned another chance at a title.

“We really felt that we were confident going into the game against London. And I think going into that game, being the underdog, played a huge, huge role for us,” said Blue Devils assistant coach John Yacou.

The Strikers, meanwhile, make the final after a hard-fought semi – which ended 1-1 and went to a penalty shootout – against another top L1O side in Vaughan Azzurri. The side fell in the first half and looked out of the running before coach David Porco changed the team’s shape at halftime, leading to a swashbuckling second frame that brought several chances, one eventually converted by talismanic striker Cristabel Oduro late in the second half. Woodbridge went on to win the penalty shootout, putting a cap on a successful regular season which saw them land second with a 6-3-3 record.

“To win this would bring such immense pride for all the efforts and the sacrifices made by this group,” Woodbridge coach David Porco said of his veteran side. “It was definitely a challenging season and we endured.”

Woodbridge has finished outside of the top four just once over five seasons and has finished runners-up twice – including in a dramatic 2018 final that saw them lose to Durham United, now Pickering FC, as an undefeated team in the regular season.

Woodbridge veterans with title chance: Woodbridge coach David Porco calls them “the Core.” Kira Bertrand, April Syme, Cat Rogers, Oduro, and ‘keeper Vanessa Fiore have been with the club’s top-level women’s team for half a decade, emerging as some of the best veteran women’s footballers plying their trade domestically. Between pro stints abroad, this “Core” has remained through it all and could finally lift their first league trophy Sunday.

“I’ve always said the ‘Core group’ ruined soccer for me because I don’t know if I’ll ever find a group that wants to be there, put a showcase for League1, and get a pro league off the ground as much as they do,” Porco said. “They got enthusiasm like their 15-year-olds, they got a commitment to when they practice that it's at 100 miles an hour. It's intense.”

Former Canadian women’s national team players Diamond Simpson and Alyscha Mottershead, other key parts of Woodbridge's veteran presences, have been unavailable this season due to pregnancies, though they intend to return.

Can Oakville exercise finals demons: It’s been a long two years since the Blue Devils fell in the 2019 Final to FC London – a match which they performed well but failed to convert on early chances. Coach Natalie Bukovec and co. have themselves seen a new “core” emerge from the one that brought them to a 1-0 loss to FC London – top scorer Mahira Ali has departed, while ex-CanWNT defender Rachel Melhado will miss the match too, having given birth earlier this year. "When you lose the players like Rachel and Mahira you start to see a difference – but credit to the players and coaches for stepping up,” Blue Devils assistant coach John Yacou said.

The side has Laura Twidle, though, with the longtime L1O winger scoring six goals in over 1000 minutes this season. Other standouts include defenders Talia Merino-Sierra and veteran Nicole Mailloux.

“Laura has been a huge part of this team this year’s success, no question,” Yacou added.

Not much to split perennial L1O heavyweights: Woodbridge and the Blue Devils split their season series, with 5-0 late-season win by the Strikers as the only outlier (more on that later). Besides that, though, there isn’t much between two heavy hitters at the top of the women’s game in this country. “In my opinion, both teams deserve to be in this final,” Yacou said before the match. “Whoever wins will deserve it because of the work rate and the struggles that both teams have faced.” On the flip side, Strikers coach Porco isn’t claiming a big advantage after that 5-0 win in October, which was highlighted by an Oduro hattrick. “The first match it was one-nothing on a rather weak goal, in my opinion, then we beat them the next match I told the players: ‘This is not a 5-0 team’,” Porco recalled. “We just happened to play the probably the best game I've seen us play in two years… They're solid, they're well-disciplined, and we’ll need to be on our best to win Sunday.”