Master’s FA leaning on self-belief ahead of York United tie: “Our players are still carrying that attitude from 2019”

Master’s Futbol Academy is one of League1 Ontario’s inaugural clubs having been a part of the competition since its inception back in 2014.

In their first five seasons of L1O play, the team failed to qualify for the league playoffs, finishing dead last in consecutive years between 2015 and 2016.

Given their relative mediocrity in the table going into the 2019 League1 season, few outside of Saints players and staff had the group pegged to be a playoff quality team — the shock factor was only heightened when Master’s went on to win the whole thing and capture the 2019 League1 Ontario Championship with an emphatic 4-1 win the final over FC London.

Before beating London to be crowned provincial champs, the 2019 winners had to get by two perennial powerhouses in Sigma FC and Oakville Blue Devils in the earlier stages of the playoffs, all while training once a week in small groups when cricket fields and football endzones were available to them.

Having faced no shortage of adversity ahead of earning their spot in the Canadian Championship by virtue of winning the League1 title, the postponement of the 2020 edition of the tournament and the inability to train for prolonged periods of time is just another challenge during this Cinderella run.

Master’s FA technical director Junior Groves continues to remind his club how they got here and that the job is not yet done. 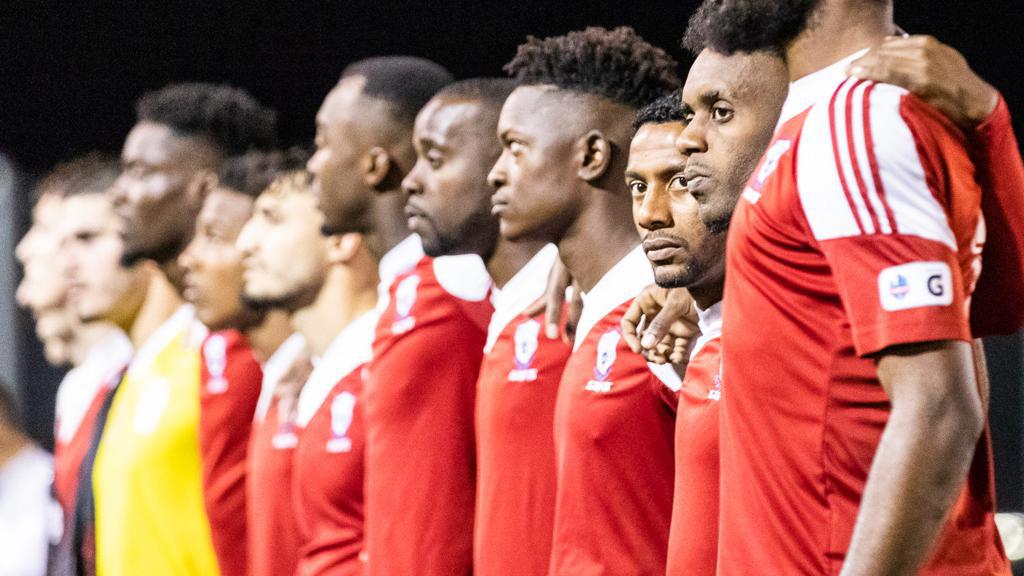 “I tell our players and all members a great excuse brings the same results of a bad excuse, both excuses bring failure to get the task done,” Groves told CanPL.ca of his mentality ahead of the York tie. “We had a great excuse with this pandemic but if we quit the results will still be the same as if we used a poor excuse.”

In a league often applauded for its ability to develop young domestic talent, the Saints are a unique group in that they are largely comprised of senior players, many of whom have professional and/or international playing experience earlier in their careers.

Former Jamaican senior player Akeem Priestley — who scored a hattrick in the 2019 League1 final win, ex-Toronto FC and Canadian youth international Joey Melo and defender Adam Czerkawski, who played for Team Ontario in the 2019 CPL’s U-21 Showcase Match, are just three of the many players with notable pedigree away from the semi-pro level who suited up for Master’s during their title run two years ago.

Groves and head coach Rick Titus could have even more firepower and professional experience in the squad when they face the Nine Stripes at York Lions Stadium. Matthew Groves, son of the club’s technical director, has joined the team for 2021 and brings a veteran presence, having spent time playing overseas in Malta. League1 veteran Joel Anderson is another new addition to the Saints this season and gives the group more of the leadership they’ll surely need as they take on a superior opponent in York.

While both Groves and Titus are embracing the underdog role as they get set to face a team a level above them in the Canadian soccer pyramid, the latter is confident his side will perform on the day — as long as they head into Saturday with the right mindset.

“Teams that are champions behave like that even before they hit the pitch,” Titus told CanPL.ca “I believe that it's an attitude that you have to have before you even start playing, a mentality that you can carry with you and I think the players are still carrying that attitude from 2019.”

Master’s have opened their 2021 League1 campaign with two wins and a loss, most recently defeating Darby FC 1-0 thanks to a goal in the final 10 minutes of play.

Still carrying the swagger of their 2019 title with them every time they step foot onto the field, the Saints have done their preparation leading up to their first-ever appearance in the Canadian Championship.

According to Titus, now it all comes down to having the self-belief for the occasion as they look to play spoiler once again, just as they did two years ago.

“I believe that their confidence is high and keeps growing as we play game after game so I'm just hoping that they will bring that winning attitude and championship mindset again.

“I believe they will and I believe that we will be successful in what we're trying to do this season.”

Tickets for Master’s Futbol vs. York United on Saturday, August 21 at York Lions Stadium (3 pm ET) can be purchased here.