League1 Ontario is pleased to announce the 2021 season will commence on Thursday, July 29 in Maple, Ontario with Vaughan Azzurri hosting Blue Devils FC in a Women's Premier Division heavyweight tilt. The Men’s Premier Division debuts the next day with pair of matches, with newcomers Guelph United welcoming 2019 finalists FC London to Alumni Field and North Mississauga travelling to Bronte Athletic Park in Oakville to take on perennial powerhouse Blue Devils FC.  Those three matches set the stage for another seven contests scheduled to take place across the province on opening weekend — with another five Men’s matches and two Women's fixtures slated for Saturday and Sunday.

With last year’s season cancelled due to pandemic-related restrictions in Ontario, the league is grateful to get back underway this summer and to once again provide an opportunity for its players to compete and continue their development.

"We are incredibly excited to be able to launch the 2021 edition of League1 Ontario,” said League1 Ontario Executive Chairman Dino Rossi. "After losing the 2020 season due to COVID-19, we felt it was absolutely critical to do whatever it takes to get back on the pitch this year."

The Men's Premier Division will consist of 15 teams split into a seven team East Division and an eight team West Division. The teams will play a 12 game regular season schedule starting July 30 with the top two teams from each division advancing to the semi-finals. The winner of the championship final in November will represent League1 Ontario in the 2022 Canadian Championship tournament. 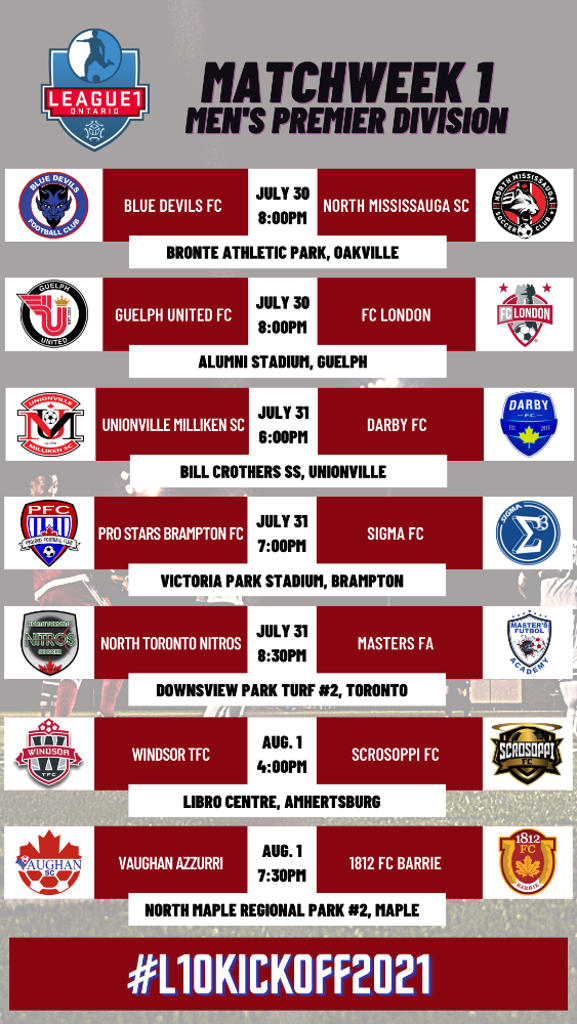 The Women's Premier Division consists of a seven team competition organized in a single table. The teams will play a 12 game regular season schedule starting July 29 with the top four teams in the regular season advancing to the semi-finals.

Given the challenges posed by starting this season three months later than normal and with very short notice, some clubs have opted to delay their return to Premier Division competition until the 2022 season, when they are in a better position to prepare appropriately for a full campaign.

"Because of the very late start to the season, which results in finishing two months later than normal, and due to other challenges inflicted by the COVID-19 shutdowns over the past 15 months, not all of our license holders will be in a position to field teams in the Premier Division this year,” said Rossi. “We and all of our teams have had to be very flexible in order to get this competition off the ground."

With a big portion of the L1O player pool comprised of University and College student athletes, some sides would have limited squads after Labour Day.

To combat these challenges, the league has introduced the ‘Summer Championship Series’, a special competition created for the 2021 season only, comprised of 11 Men's teams and seven Women's teams. This is an open-age competition that features some Premier Division clubs that were unable to commit to a full 13 week season and also includes guest team entries from the Toronto FC Academy.  The Summer Championship Series will kick off on July 22nd and conclude by Labour Day weekend. 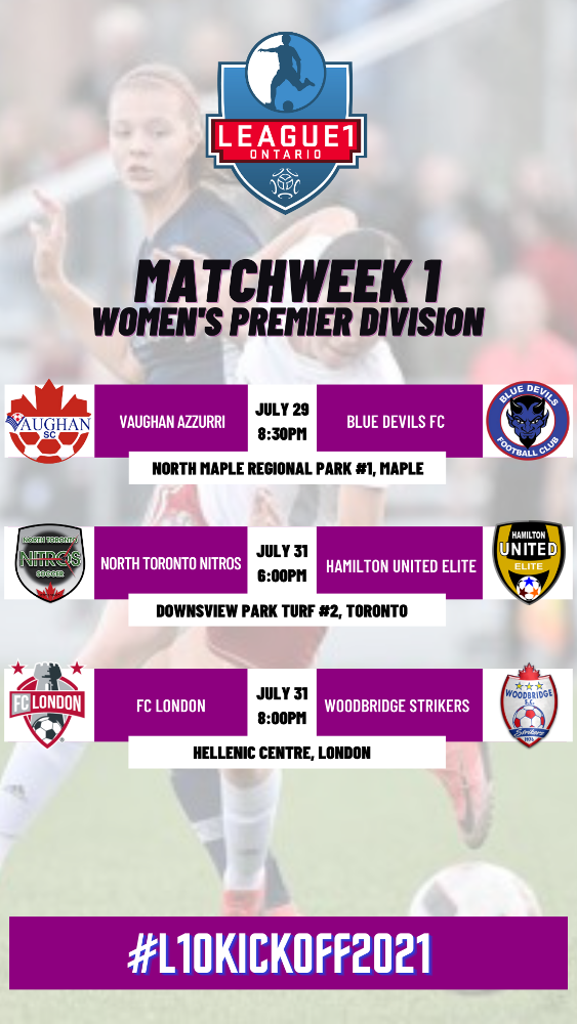 The L1O Men’s and Women’s Reserve Divisions will also return for 2021 with 10 Women's teams and 21 Men's teams registered to compete. Following a similar format to the respective Premier Divisions, the Reserve Division competition will consist of teams contesting 12 regular season matches, with the top teams advancing to the playoffs and featuring Championship Finals weekend on November 6-7.

Featuring a grand total of 71 combined Men’s and Women’s teams across the Premier, Reserve and Summer Championship Series Divisions, League1 Ontario looks forward to once again providing the top level of soccer competition in Ontario and to continue offering a critical developmental pathway for players with ambitions of climbing to the professional and collegiate ranks.