Pick a CPL player – chances are they’ve played in League1 Ontario before.

Founded in 2014, the Ontario development league has served as a well-timed pipeline for CPL’s emergence five years later. Over 40 current CPLers are L1O grads, making it the single greatest source of talent for Canada’s new professional league.

CanPL.ca has assembled the best lineup possible of players who have featured in both leagues to show just how robust the talent pipeline is. 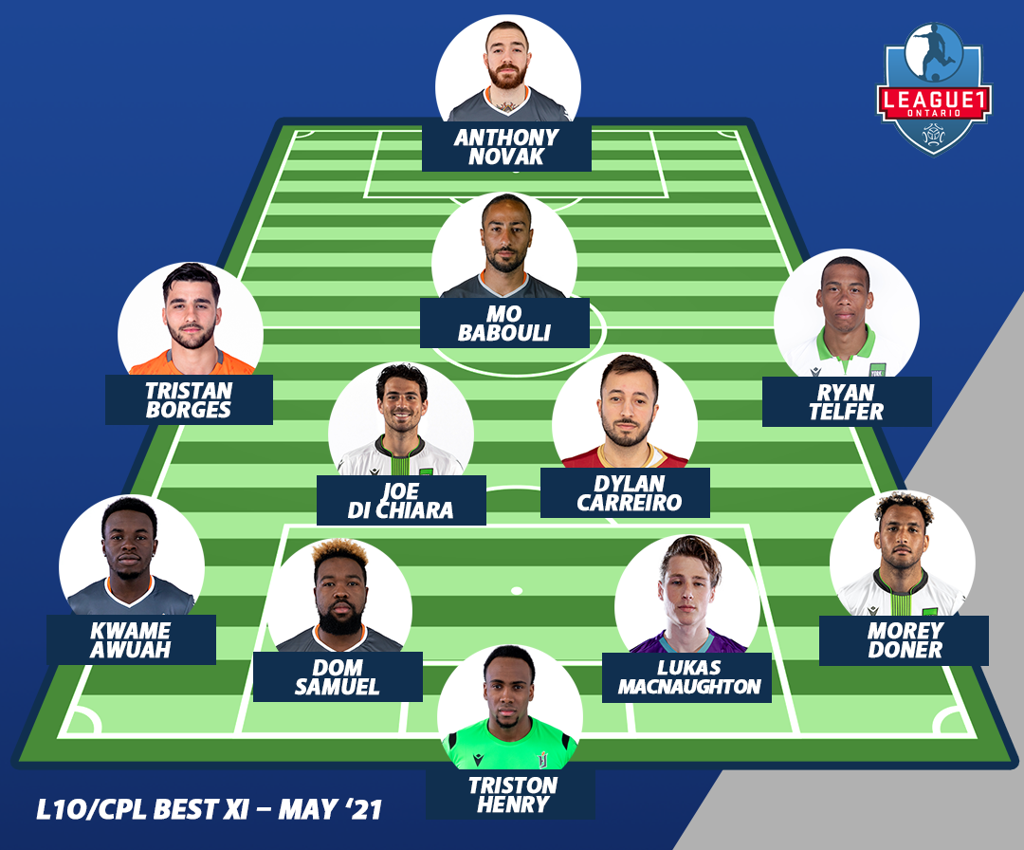 Reigning CPL Goalkeeper of the Year Triston Henry was a lock for this spot. Three years with Bobby Smyrniotis’ Sigma FC side in League1 Ontario helped Henry and his backline – several of which made this list – create a level of chemistry unmatched in the CPL. That allowed a technically-gifted Henry to thrive as a solid distributor of the ball and initial spark to the Forge attack and, rightfully so, stake a claim among the best Canadian goalkeepers plying their trade domestically.

The kid from Collingwood has quite the story that took him from a small town through L1O and Aurora FC, where he emerged as captain and L1O all-star before the CPL took off. The 27-year-old quickly caught the attention of those in and around Ontario, including former Aurora coach Jimmy Brennan, who brought him on for the 2019 CPL season. Doner went on to make 38 appearances for York and became one of Canada’s best up-and-coming fullbacks before moving to the HFX Wanderers for 2021.

Two-time L1O defender of the year Dominic Samuel has made a seamless jump to the professional level alongside Sigma FC teammates like Henry and Awuah. Samuel, who was named to L1O’s all-time Best XI last Spring and has featured across the Forge backline in their two championship-winning seasons, showing defensive intelligence and versatility like few other domestic defenders have. Those hours in the lumberyard have really paid off.

Yes, Pacific FC’s Lukas MacNaughton played in L1O – three seasons split between North Toronto Nitros and Alliance United, the latter of which he helped guide to the playoffs in 2018. MacNaughton became one of PFC’s top defenders right after signing late in the 2019 preseason, making 22 appearances in Year 1 and scoring two goals. The 26-year-old continued that form at the Island Games, scoring a late winner in the first stage and missing just two matches in PFC’s run to the second round.

Another player to come out of the Sigma FC factory is Forge FC left back Kwame Awuah. After playing in the youth teams of L1O clubs Woodbridge Strikers and Sigma FC, Awuah played for the University of Connecticut Huskies. During his time at UConn, Awuah also spent some time at Sigma FC — making six appearances — before being drafted by MLS side New York City FC in 2017. Awuah reconnected with former Sigma FC boss Bobby Smyrniotis when both moved to Forge FC ahead of the 2019 CPL season, where they’ve both been extremely successful ever since.

The CPL’s history-maker made a handful of appearances for Vaughan Azzurri in 2016, juggling York University football with League1 Ontario. He was swiftly snapped up by Toronto FC and, well, the rest is history. Telfer made 39 appearances for York United (then York9 FC) across two seasons, scoring ten goals – including the first in league history just over two years ago against Forge FC – and adding three assists.

The former Valour FC captain returned from a stint with Dundee in Scotland to ply his trade closer to home in 2016, choosing L1O outfit Woodbridge Strikers. He played two good years there, leading Woodbridge in 2017 to the Eastern Conference title (losing to Oakville in the championship match), as well as the L1O Cup in the same year. Carreiro was named L1O’s MVP after a phenomenal 2017 campaign. A year later, he turned heel and suited up against his former Woodbridge teammates, playing just once for Vaughan Azzurri in the L1O Final – a 2-0 win for Carreiro’s side.

Another member of L1O’s all-time Best XI, recent Cavalry FC signing Di Chiara was a long-time L1O stalwart – starting with an MVP performance in the 2014 League1 Ontario Cup final for Vaughan Azzurri. Another MVP award followed in 2016, as did first-team all-star honours. Di Chiara’s skill translated to the CPL well as the former Unionville Milliken and Vaughan Azzurri grad emerged as a midfield leader for York9 (now York United) in 2019. His best work came at the Island Games where was pegged as an early Player of the Year candidate before York’s early exit.

Prior to becoming the CPL’s Player of the Year in 2019 with Forge FC, Tristan Borges played for Sigma FC in L1O. After beginning his academy days with L1O side Vaughan SC, Borges moved to the Toronto FC Academy, and then the academy of Dutch side SC Heerenveen. He returned to Canada in late 2018 with the Sigma FC side that would form a lot of Forge FC’s inaugural roster, scoring twice in ten matches before moving to Forge the following January.

The Forge-turned-Cavalry striker got his senior career off to a strong start when he joined the Oakville Blue Devils around the time of their jump to L1O in 2015. He was with the side when they won the 2017 league title and qualified for the Canadian Championship, and he won the L1O Golden Boot with 20 goals in 2018. Novak went straight from League1 Ontario to the CPL with Forge, for whom he scored nine goals over two seasons before moving to Cavalry for 2021.

Forge FC’s impact signing before the 2020 season came into the CPL as a known quantity for his time with Toronto FC, but before he broke out in MLS, he was a star in L1O. Babouli led the TFC Academy side in the inaugural season of League1 Ontario back in 2014, when he scored a blistering 21 goals in 16 games. He was named the league’s first-ever MVP and Golden Boot winner after helping his side to the regular season title, earning himself a call-up to Canada’s U-23 team for the 2015 Pan Am Games in Toronto.