How L1O offers referees 'a tease' of Canadian pathway: 'Gotta see it to believe it' 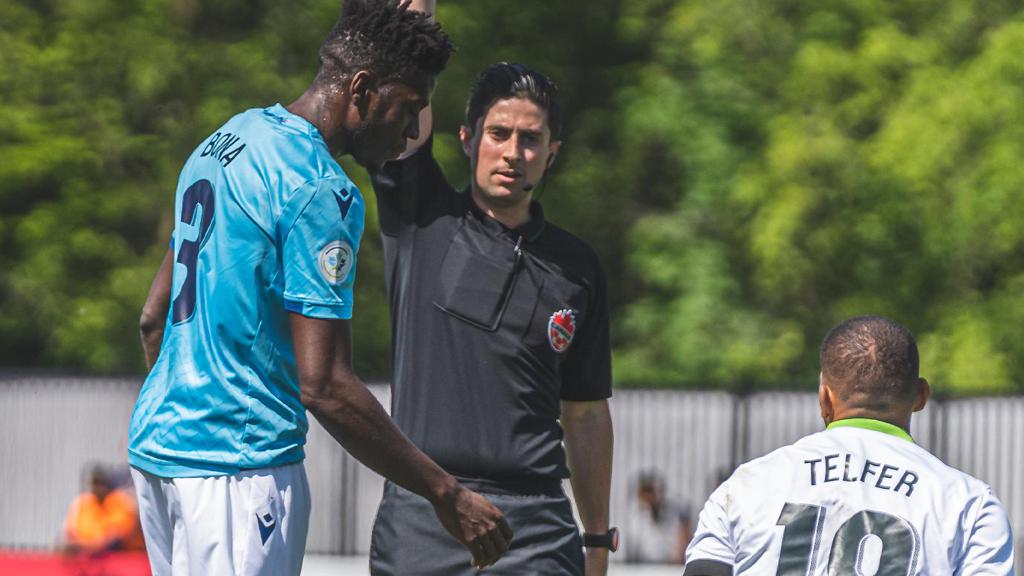 For referee Twayne Anderson, the simple act of showing up to a League1 Ontario match with a suit and tie was enough to catch his attention.

Anderson, 23, has been an official in the league for two seasons and represents a younger generation of officials in Ontario with a newly-widened pathway to the higher levels of the game. With the Canadian Premier League’s arrival, Canadian officials have been assigned to an additional 400-odd domestic professional matches – a huge boon for those looking to advance their careers in the discipline.

L1O, meanwhile, is a standards-based league – everything from dressing rooms to technical areas to pregame attire is held to professional levels. To that end, referees are required to arrive early and dress appropriately.

“Walking up to the field wearing that suit was a bit of a shock for me,” Anderson said with a chuckle. “But the seriousness level of the refereeing was just so important. It opened my eyes as a young referee to see what was possible.”

Eight referees have made the jump from L1O to Canada Soccer’s National Referee program with another four on its list of Nextgen Referees. All 12 officiated CPL matches in 2019, completing a pathway to the professional level in a matter of years.

Anderson has yet to break that top rank in the CPL but is considered one of Ontario’s top refereeing prospects.

“Getting a little tease of what it's like to be a national referee or work with those above me is kind of what I got with League1 Ontario,” Anderson began. “Once you get into the league, it only takes a few seconds to realize the competition level is high and you need to keep up.

“You gotta see it to believe it. L1O and the officials that have moved on show there's definitely more to this and like, you can take the series as a professional, possibly.”

Fabrizio Stasolla represents the other side of Ontario’s refereeing pathway. The Toronto, Ont. native has been in the middle for over 100 L1O games and made 12 appearances in the CPL in 2019. A L1O refereeing success story that started with the league’s first season in 2014... and most recently landed him a fourth official slot for a Montreal Impact vs. Toronto FC MLS tilt.

Stasolla, like Anderson, also credits L1O’s speed of play for his improvement as an official.

“It made me think more about my training,” Stasolla began. “The ability to watch video afterwards was huge – I really like to analyze my work. You don’t want to make the same mistake twice and L1O really helped me there.”

Rules over referee pre-game outfits have loosened in recent years as official League1 polos now suffice. But for Stasolla, that heightened high-performance atmosphere – and corresponding outfits – made a difference in his path to Canada’s upper levels of officiating – and it can for the next generation too.

“Believe me, showing up in a suit is one of the most annoying things,” Stasolla said with a laugh. “But when you’re walking from the parking lot to the locker room with your crew, it just feels different.

“You have to see it to believe it and, in this case, you can see yourself in that suit as a professional.”