‘There is advancement for us’: L1O women eye coaching equity with 'C' licences

The most impactful story in Canadian women’s football this week didn’t happen in England.

A total of 52 League1 Ontario players are set to take Canada Soccer “C” Licence courses through a partnership with Canadian soccer’s governing body, which was unveiled Monday.

“Once we realized we wouldn’t be playing last Summer, we started setting goals,” Lang told League1Ontario.com of the group of Women’s Division players. “The first was to get more females into coaching roles.”

Players banded together for socially distant fundraisers, including the #ELEVATE program and wsoccer.ca that sold posters of Canadian women’s national team stars Jessie Fleming and Kadeisha Buchanan to raise funds. That caught the attention of Canada Soccer and the modest goal of a half-dozen licences rose to a half-century after Moscato contributed 2020 OLY Canada Legacy Grant funding to the project.

Women currently make up only 19 per cent of Canada’s total licensed coaching pool, according to a 2019 FIFA Women’s Football Member Association Survey Report, and many women’s players in the group had never had a female coach.

Rachel Melhado could relate. A former Canadian senior national team defender, the Mississauga native left Ontario to compete for the Seattle Sounders women’s team and play almost three full seasons in the German Bundesliga. Melhado, now back in Ontario, features for Oakville Blue Devils and looks to be the female coach she never had for this next generation of Ontario’s athletes.

“My first female coach was at the University of Louisville,” Melhado said, recalling a lack of role models in the sport during her adolescence. “But she was such an important mentor and I’m hoping through my experiences that I can be that advocate for those girls.” 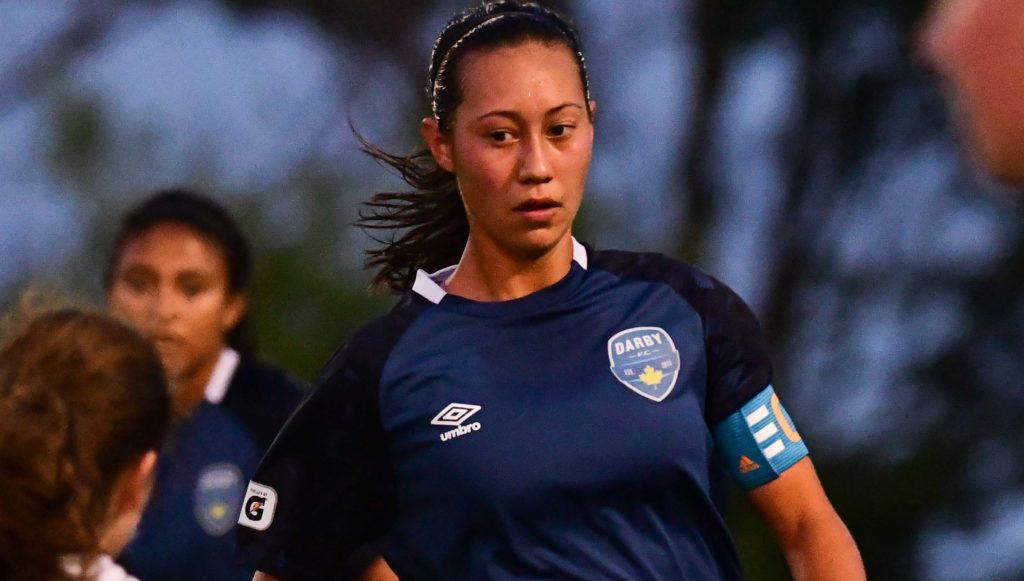 “It’s really important nowadays that there is more female representation, so we can kind of build that equity in sport,” Chia said. “We can build that strong female role of a leader in sport.”

Chia, who spoke to League1Ontario.com between Kinesiology exams at Trent University, stands as one of the younger members of the group.

“It’s a great group of female players, coaches, just role models, really,” Chia said. “It’s been nice to kind of get together and have conversations about these topics. We want to do more, too.”

Attacker Colleen Beasley – who has made over 60 appearances in League1 Ontario since joining in 2015, the division’s first season – will be one of five players from Vaughan Azzurri to take the course.

“We didn’t really talk to each other outside of our team,” Beesley said of the women’s player group. “It’s really built a community and that gives you power in numbers, right? We see women age out of the game when they hit that 23-to-25-year-old range… But keeping them in helps the game grow overall – it’s just sharing knowledge.

“It’s the growth of knowledge that this group has already shown.”

The Canada Soccer “C” Licence courses will kick off for the 50-odd players next month. L1O’s women’s board also achieved the target of ensuring a 25 per cent of recipients identify as BIPOC (Black, Indigenous, and People of Colour).

Melhado is eagerly anticipating the start of the online course, which will be led by an all-female group of instructors.

“This program shows the younger generation of females and women growing up in this sport that there is advancement for us,” Melhado began, “The limelight might not be on us all the time, but that doesn’t mean those opportunities aren’t there.”

Lang is a living embodiment of that transition to coaching. The former North Mississauga Panther and University of Guelph Gryphon has signed on to be on Guelph Union’s inaugural coaching staff.

“We know it’s really important for girls to have role models that they can relate to,” Lang said. “My priority is just keeping women in sport. I’ve reached that point now where I’ve graduated, and I’ve seen how hard it is to stay involved. We’re leaking women out of the timeline in all directions because of the environment we create.”

She added: “It was good to see how people rallied behind our project – it was also very illuminating to see which people completely ignored us, to be honest.

“I think this is going to be the best C License cohort out of Ontario ever seen.”