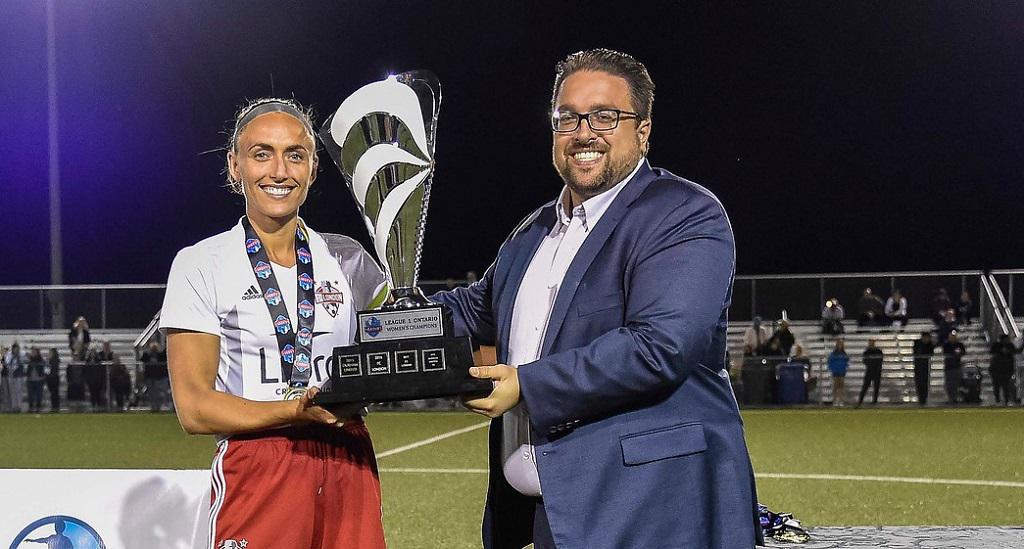 League1 Ontario is pleased to appoint Dino Rossi as Executive Chairman ahead of the 2021 season. Having spent the past several years serving as league Commissioner, this new role will allow Rossi to focus more on strategic initiatives and license holder relations, while gradually reducing day-to-day operational responsibilities.

Having played a pivotal role in founding the league, Rossi’s journey in soccer began early on as a youth player, and a lifelong Juventus and Canadian National Team supporter.  Later in life, he turned his focus to coaching his kids and soccer governance, having served as a Board Member with Ontario Soccer, Peel Halton Soccer Association and Soccer Academy Alliance Canada.  He also served as Chair of the local organizing committee for the TO2015 Pan Am Games Soccer competition, which was hosted in Hamilton.

In 2010, Rossi co-founded Milltown FC (which was based in Milton, Ontario) and that venture in owning and operating a semi-professional club ultimately served as the spark for League1 Ontario, as he and his partners recognized a glaring need to create more and better opportunities to help support young Canadian players make the transition from amateur to professional soccer.

By 2011, the idea of League1 Ontario was introduced to the leadership at Ontario Soccer and by 2014, 10 men’s teams took the field for the league’s inaugural season.

Today the league boasts Men’s and Women’s Premier Divisions as well as a growing reserve league competition and has seen its clubs graduate more than 150 players, male and female, into professional leagues worldwide.  A number of league alumni have also gone on to represent the Canadian men’s and women’s senior and youth national teams, as well as the national teams for several other countries.

League1 Ontario is grateful to have Rossi take on this in his new role as his vast experience and genuine passion for the game will help develop the league’s strategic direction moving forward.

Q: How does this change of title impact your role with League1 Ontario?

Rossi: My goal for this new role is to invest more of my time in leadership and the development of medium and long-term strategic initiatives for the league, as well as to support our league management team. Obviously, I have gained a lot of experience and I have established a lot of relationships. I want to help wherever I can. But like any organization, leaders sometimes have to step aside a bit so that you can create room for new people and new ideas to come forward and try to help take the league to an even higher level.

I'm not going anywhere. I'm just pivoting in my role.  However, I remain as committed to League1 as I've ever been and I'm really excited about our future.

Q: How long has soccer been a part of your life and how has it impacted your journey?

Rossi: I always loved the game. I played competitive soccer up to the age of 13 but I wasn’t particularly good. When I had kids, I got into coaching their teams for a few years at the house league level, which was a fun and eye-opening experience.  In fact, soon after getting involved in grassroots coaching was when I started to become very interested in trying to understand how to improve the state of the game locally and nationally.  That curiosity has resulted in a 15-year run of being involved with soccer governance, team ownership and the founding of League1.

I've been a Juventus fan since I was a young boy.  My wife likes to remind me that one of my top priorities for our honeymoon was that the hotel we chose had to show the Juve-Real Madrid Champions League Final in 1998. I travelled to Cardiff in 2017 in hopes of seeing Juve get their revenge but Madrid broke my heart again in that Champions League Final.

The Canadian National Team has been my other love, and source of frustration, for as long as I can remember.  I get so excited when a current or former player, male or female, gets the opportunity to pull on the Canadian shirt.  It’s such a huge privilege for any player to play for their country and I am always so proud to see them represent Canada.  I think those moments are really inspiring.

Q: How much has L1O evolved over the past seven years?

Rossi: We launched officially in 2014 with the men's division of 10 teams. We added a women's division in 2015. And then in 2019, we added our reserve league, which is designed to serve as the feeder system for our league’s Premier Division teams.

There's a lot of interest in the league these days and a lot of young players who have come to view playing for a League1 club as an important step in their path as a footballer.  I am very gratified to see what the league has become, thanks in large part to the commitment and investments made by our amazing clubs, and I am also truly excited about where the league and this level of soccer in Canada are headed in the future.  We need more leagues like League1 across this country.

Rossi: There are so many things I want to do but one of my top priorities is to see us make more progress on growing our women's league.  Specifically, I want to see us provide more high-level competition opportunities for our top teams and to provide meaningful assistance to our female players who wish to pursue professional opportunities.  My former colleague, Carmelina Moscato, had incredible ideas for growing our women’s league but COVID-19 interrupted the execution of those plans.  When we can get back on the pitch, I am excited to see her vision and strategies come to life and will do all I can to support it.

The emergence of the CPL has been a game-changer for our male players.  Their pathway is clear now and approximately 40 or so League1 alumni have played in the CPL in both 2019 and 2020.  Until we have a similar league to the CPL for women, League1 will need to develop effective strategies to assist our talented female players to achieve their professional ambitions.