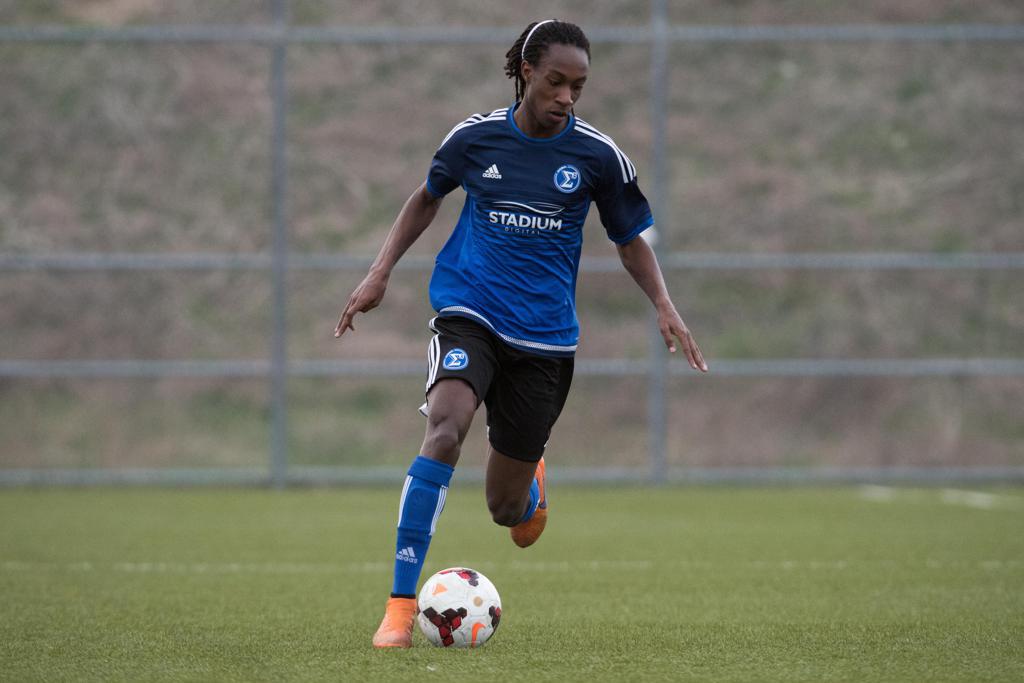 Kadell Thomas’ 2019 season had its ups and downs.

The former Sigma FC player began with scoring the first goal in Forge FC history, in the inaugural Canadian Premier League match, and he later topped things off with his goal of the year effort against Valour FC.

Last September, though, a nasty collision with an HFX Wanderers FC midfielder put a damper on his momentum.

“I didn’t feel anything in the moment at all,” Thomas recalled of the incident. “I didn’t notice anything until the physio looked at it and said, your teeth probably aren’t where they should be.”

According to Thomas, his front two teeth and the bone above them broke, which had to be surgically repaired. He missed the last seven games of the CPL’s Fall season, returning for just a brief cameo in Finals 2019 vs. Cavalry FC.

The injury is a distant memory now; physically, it’s completely healed, and Thomas himself doesn’t feel any hesitation going up for duels on the pitch.

“Any effect that I would have from that injury would probably be mental,” Thomas told CanPL.ca. “I’m healed up, I’m ready to go. I don’t have to wear a mouthguard anymore. Should I? Probably. I don’t know, for me it’s something that I don’t really think about when I’m playing out there, especially during training. So I think that’s gone.”

Of course, the recovery process was frustrating; the worst part, according to Thomas, was being unable to eat solid foods for a while. Recovering from oral surgery isn’t quite like recovering from other injuries; it’s more of a waiting game than a rehab process.

Now, though, Thomas is back — as are his Forge teammates, sort of. With the CPL champions returning to individual and small-group training, Thomas (whose training partner last week was captain and former Sigma talent Kyle Bekker) is confident his team will be as capable as any of getting back into the swing of things.

After winning the league title in 2019, Forge’s squad isn’t much changed for 2020 – one that relied heavily on the influence of Sigma FC. A total of 11 players on the CPL squad spent time with the L1O club, which was headed by current coach Bobby Smyrniotis.

These L1O grads were CPL standouts, too, with L1O All Time Best XI entrants Dominic Samuel, Giuliano Frano, and Jonathan Grant featuring heavily in the CPL finals. Same goes for Triston Henry, who earned a goalkeeper of the year nomination after jumping from Sigma to the pros.

Thomas thinks people might be sleeping on the CPL champions, forgetting just how good they were last year.

“I think people are forgetting that a lot of us have been playing with each other for six, seven, eight years now,” Thomas pointed out, referring to previously L1O seasons. “Some of these teams are rehashing everything they have, starting from scratch. The chemistry won’t be there.”

“It’s important to realize that we’re still here, we’re still people from a similar environment,” he continued. “We’re playing the same system, and we will be contenders.”

With former Sigma attacker Borges moving on to Belgium after his breakout 2019 campaign, Smyrniotis has thrown down the gauntlet for his other attackers, challenging them to step up and claim the spotlight.

For Thomas, there could certainly be a few more minutes up for grabs now.

“For me, I guess because I play on both wings there’s definitely an opportunity to step up and make a difference,” he said.

“We play in a rotational system. Everyone sort of gets the minutes they deserve when they deserve it, if they really do want to play.”

Ultimately, Forge hasn’t had the flashiest off-season in the CPL. Familiarity and chemistry from their time in L1O could certainly give them an edge when matches return, though; in a world where very little is certain, Forge FC and its strong core might be a rare constant.

It would be unwise to underrate the champions.

This article originally appeared on CanPL.ca