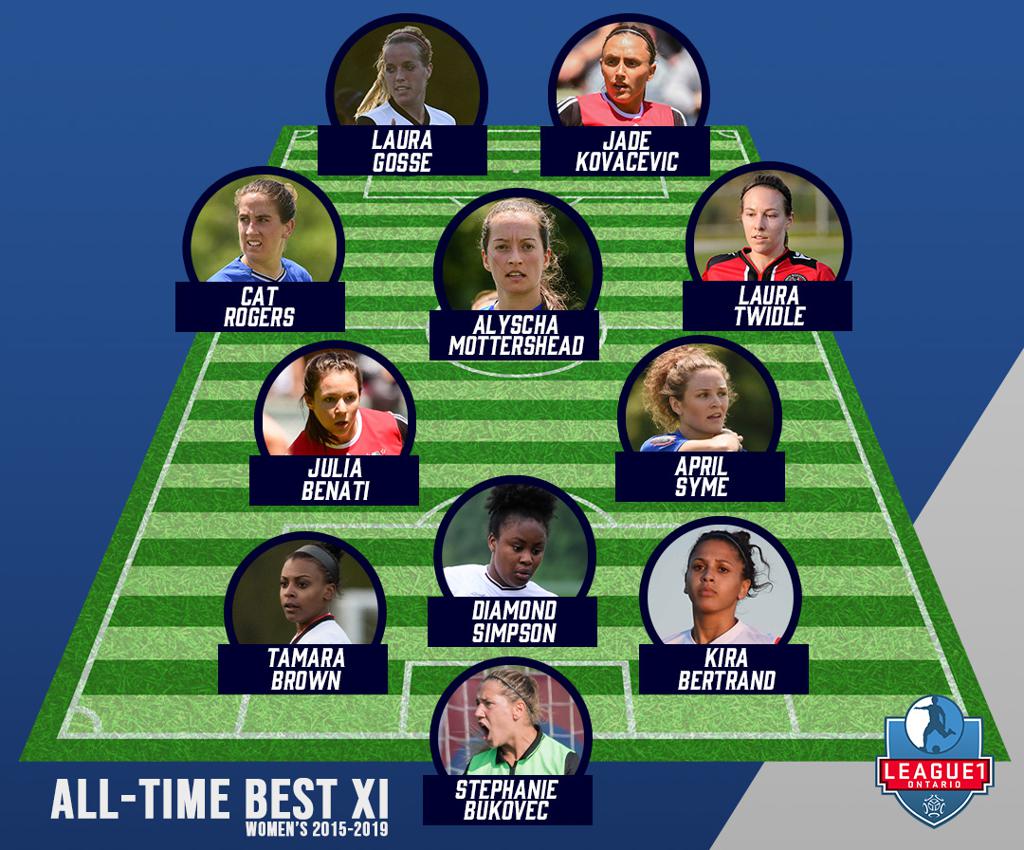 Here's an overview of the women's all-time best XI. To view the men's lineup, click here.

Stephanie Bukovec arrives after moving from two dominant years with Vaughan Azzurri to a successful career in Europe. Most recently with Ajax, Bukovec has also been capped for the Croatian national team. She was named L1O goalkeeper of the year in 2016 after conceding only seven goals in 540 minutes.

Kira Bertrand has been ever-present in L1O since the beginning, grabbing her first all-star nod with North Mississauga in 2015. Three more all-star nods put the now-Woodbridge defender fifth the L1O’s greatest.

A vicious defender, Diamond Simpson has been the league’s most consistent centreback for years; 4,700 minutes over four seasons, 13 goals, no red cards, and four call-ups to the Canadian women's national team to face the likes of Brazil and the Netherlands. Her latest accomplishment? League1 Ontario’s 2019 Best XI.

Defender of the year in 2016, Tamara Brown has had an exceptional multi-year run with Durham (now Pickering FC) and Cape Breton before launching her professional career with Swedish club Mallbackens IF last year.

Cat Rogers has been plucked as L1O women’s best left winger. Spells with ANB Futbol, North Mississauga, and Woodbridge, which produced three all-star appearances, have made Rogers a canny midfield operator – and a veteran feared by defending and attacking players alike.

Benati has been an L1O all-star every year since debuting with FC London in 2016. It's only getting better for the box-to-box maestro, who was named midfielder of the year in 2019 after her passing range and knack for a screamer were deadly elements of London's third title-winning season.

Completing the women’s Best XI pivot, Woodbridge Strikers’ April Syme is the best defensive midfielder in L1O’s history thanks to an incredible four first-team all-star nominations. Breakout seasons with The Bridge sent Syme to play professionally in Sweden before returning in 2018 to help her side to a cup championship and playoff final.

Former CanWNT midfielder Alyscha Mottershead slots in as an attacking midfielder as a record five-time L1O all-star, and fifth Woodbridge Striker on the women’s L1O Best XI. Good on the ball, impeccable vision, and physically-imposing, Mottershead is arguably the best all-around midfielder to play in L1O.

Winger Laura Twidle is a three-time all-star, most recently with Oakville Blue Devils after she captained the side to the 2019 L1O Finals. Twiddle has scored 27 L1O goals from midfield, including a team-high 13 with North Miss. in 2017.

Saving the best for last. Greatest player in L1O history, Jade Kovacevic has racked up an unthinkable 122 goals in 71 appearances for FC London – including a 40-goal tally in 2017. A rare mixture of power, pace, and technical skill, Kovacevic is a fitting final name on this all-time XI.