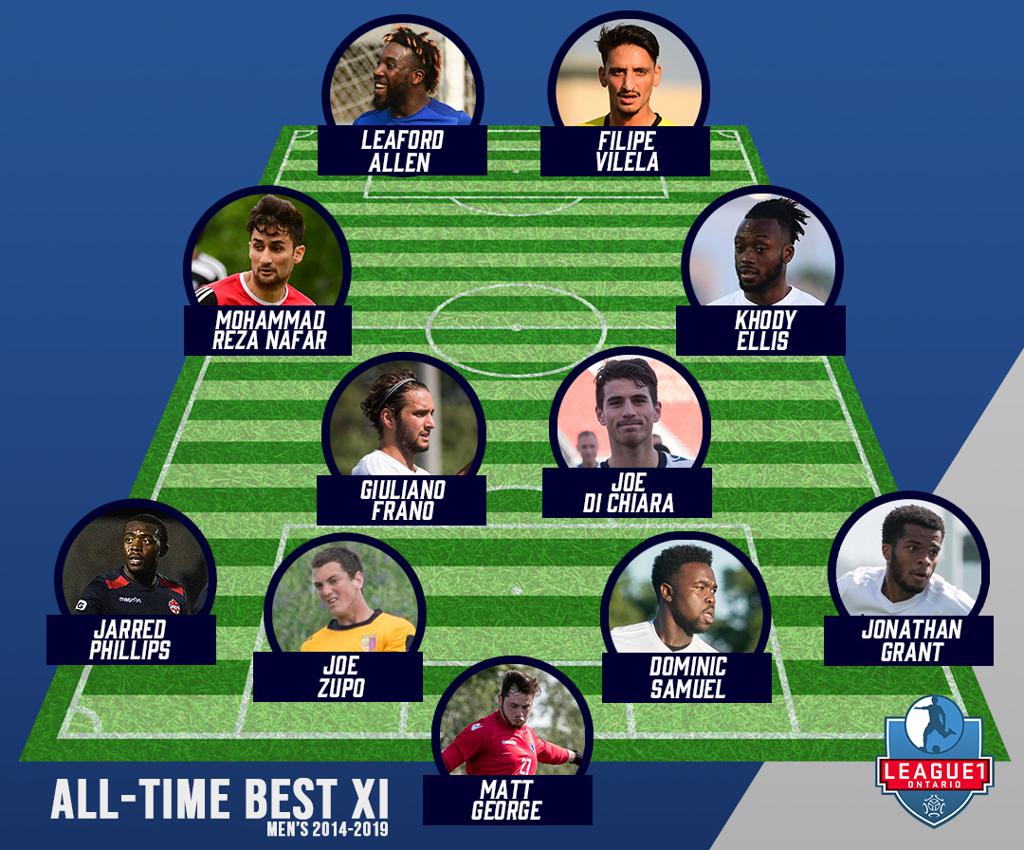 Here's an overview of the men's all-time best XI. To view the women's lineup, click here.

Four-time all-star Matt George is the only L1O goalkeeper to play in the Canadian Championship, backstopping Oakville Blue Devils and Vaughan Azzurri entries in 2018 and 2019. He earned man of the match honours in the 2017 championship final, making history with the first CanChamp-bound L1O side.

Jarred Phillips is one of L1O men’s greatest fullbacks. Appearing as an all-star on three occasions, Phillips has won the L1O championship twice with Vaughan Azzurri (in 2016 and 2018) and played all 180 minutes of their Canadian Championship debut last season.

Two-time defender of the year Dominic Samuel easily makes the L1O’s best XI on the men's side. A versatile defensive option, Samuel has found his footing in the pro game with Forge FC, playing across the backline for the and helping the Hamilton side to a CPL Championship in 2019.

A tenured L1O veteran, Grant was named the League’s first defender of the year in 2014. Returning to Sigma in 2017, Grant showed his versatility, scoring seven goals as a winger and eventually earning a professional opportunity with Forge FC.

Rising through the FC London ranks over four seasons, Mohammad Reza Nafar has slowly become one of L1O’s greatest attacking midfield talents. Modest early performances led to a sprawling 1,500-minute 2019 campaign which saw Nafar pick up goal of the year and first-team all-star nods after powering FCL to the L1O Final.

Fourth and final CPLer on L1O’s men’s Best XI, ex-Sigma stalwart Giuliano Frano arrives on the men's side as a versatile defensive midfielder. Almost 40 appearances across two first-team all-star seasons, including a nine-goal output in 2017, puts Frano well above other long-time L1O midfielders.

Player of the match in the 2014 League1 Ontario Cup final for Vaughan Azzurri, Di Chiara has been at the top of L1O from the beginning. A dominant midfielder, Di Chiara won final MVP honours again in 2016, as well as first-team all-star honours. After earning professional stints in Kazakhstan and Lithuania, the 28-year-old now plies his trade with York9 FC.

An all-star for four-straight seasons, Khody Ellis is the most reliable winger in L1O history. His mixture of blazing speed, tricky dribbling, and attacking wherewithal made the Oakville Blue Devils standout a serious threat across +70 L1O appearances.

Allen has also scored over 30 times in L1O, enough to earn four all-star nods and professional opportunities in Sweden. Allen, most recently with Sigma FC, has a knack for highlight-reel goals, too, as his combination of physicality and technical skill shines at L1O level.

Another powerful-yet-technical striker, Filipe Vilela is synonymous with L1O’s men’s division. A breakout 20-goal, championship and golden boot-winning season in 2015 with Oakville was no fluke – Vilela has gone on to record several more double-digit goal campaigns, taking four all-star nods and another L1O championship in 2017.