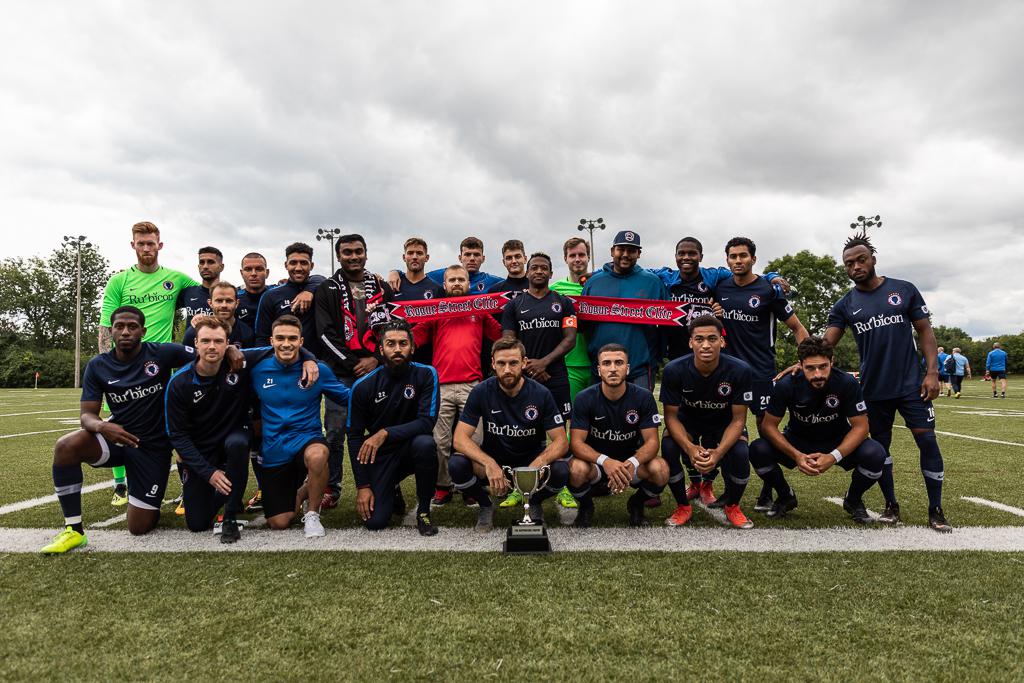 More than any other sport, football supporters play a big role in defining the culture of their clubs and the leagues they participate in. Rain or shine, through good times and bad, a club and its players are fueled by the passion and enthusiasm their supporters bring to each match.

In League1 Ontario, there is one group of supporters that has begun to make a name for themselves around the league. They call themselves Rogue Street Elite (RSE) and they are fixtures at North Mississauga Panthers matches, both home and away.

You can't miss them. They bang their drums, they sing for their club for the full 90 minutes and when their side win, they like to let the world know with a colourful smoke show. 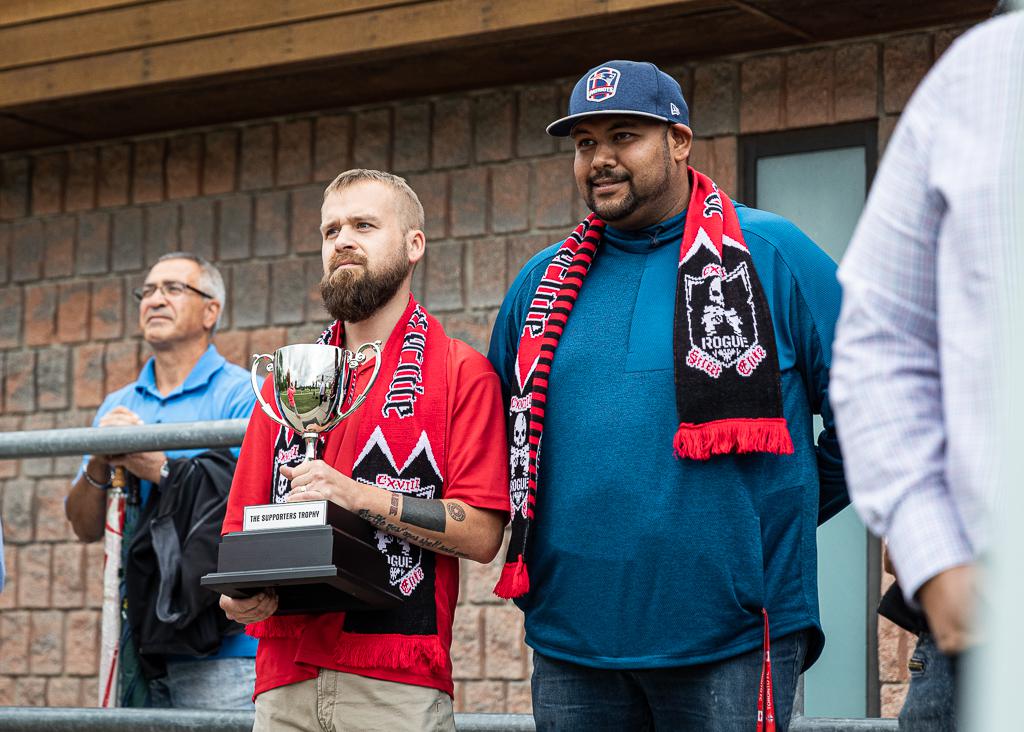 RSE, which is led by Mike Toth, Steve Meagnauth and James Pinto, have also made a significant contribution to the League1 Ontario Men’s Division through their generous donation of the newly created Supporters Trophy, which will be awarded each year to the side that finishes atop the table at the end of the regular season.

A similar prize, The Ron Smale Cup, has also been established for the regular season champions of the League1 women's division.

We sat down with the Rogue Street Elite leadership on Sunday, September 8 following the inaugural presentation of the Supporters Trophy to Oakville Blue Devils for a Q&A session to learn more about them and their inspiration for donating this new cup to the League1. 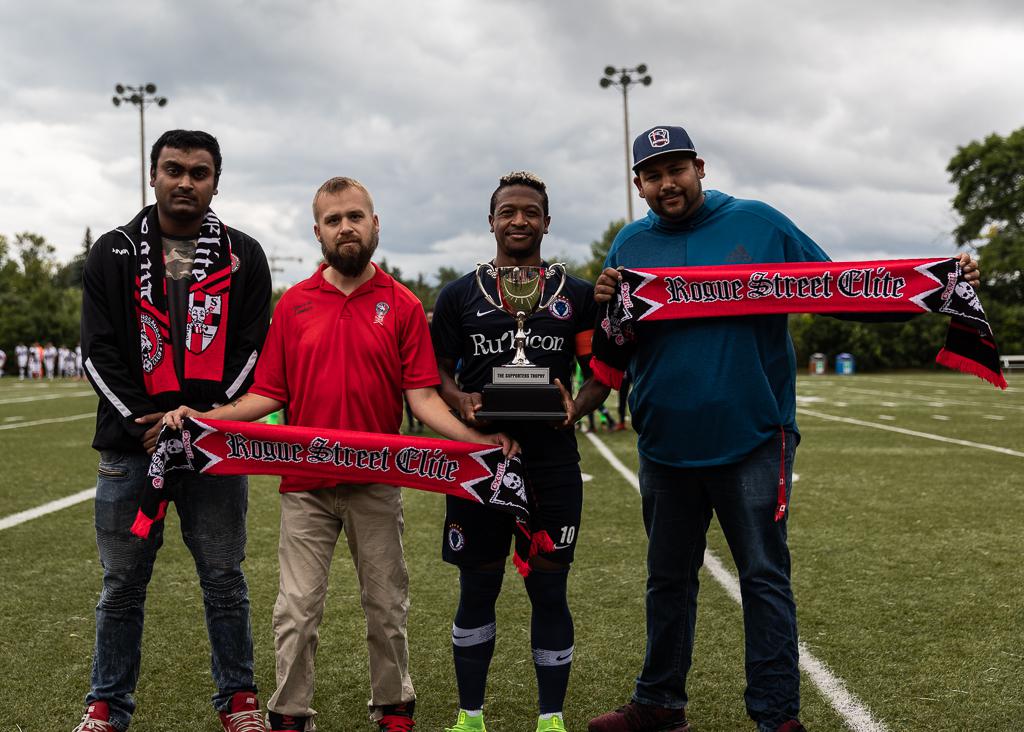 L1: Tell us a little bit about RSE. When was the group founded and what drew you to supporting North Mississauga Panthers?

Mike Toth: We originally had the idea of starting our own supporter group in late 2016 but momentum has really picked up since 2018. We had supported Toronto FC for a number of years, and we wanted to bring some the atmosphere of an MLS match to the home games for our local team. Since we started the group, we have grown to a total of 20 members, but we hope to expand and grow as we continue to support the club. It’s been a great way to enjoy ourselves with our friends and family and make new friends as well.

Steve Meagnauth: We were drawn to North Mississauga Panthers because they are the club that represents Mississauga and we all live near the NMSC clubhouse on Falconer Drive. We wanted to bring the hype and excitement we used to bring to TFC games to help push our local club towards the playoffs and the championship. We love our city and the beautiful game.

James Pinto: Our hope has been that creating a real supporter group will help draw more fans to the club. It’s taken some time to build the group but now, when match day comes around, we can’t wait to get together and we know the players love the support and the atmosphere we create. We love the club.

L1: Your donation of the Supporters Trophy is very generous. What led RSE to make this decision?

Mike Toth: We felt that the league was missing something by not properly rewarding the team that finishes with the most points at the end of the regular season. It’s a big deal. MLS has the Supporters Shield so that was an inspiration. Over the winter, my wife Shalee did a lot of work to organize us so that we could raise the funds needed to purchase the trophy.

L1: What is it about this level of the game and your club that is so important to you and the members of RSE?

Mike Toth: This level helps give players the drive they need to hopefully play professionally, in the CPL or at even higher levels. League1 has a lot of potential to become bigger than it is. We really enjoy how competitive it is and the fight by our club to make the playoffs has been a big thrill. We also love that North Mississauga Panthers works side-by-side with RSE, which is different from other clubs. It makes supporting the club more enjoyable. The relationship developed between RSE and North Mississauga has been very open.