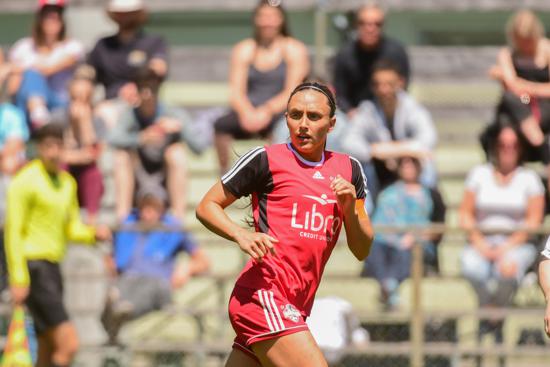 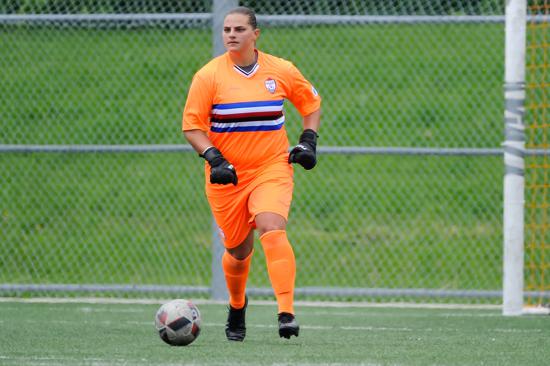 A hat-trick from FC London's Jade Kovacevic led the home side to a remarkable 4-3 win over Vaughan SC in the first leg of the 2019 League1 Ontario Women's Championship Semi-Final stage, while Woodbridge Strikers edged their tie by a narrow 1-nil margin.

Check out full match recaps, full match video and detail on the second leg of the Semi-Finals below! 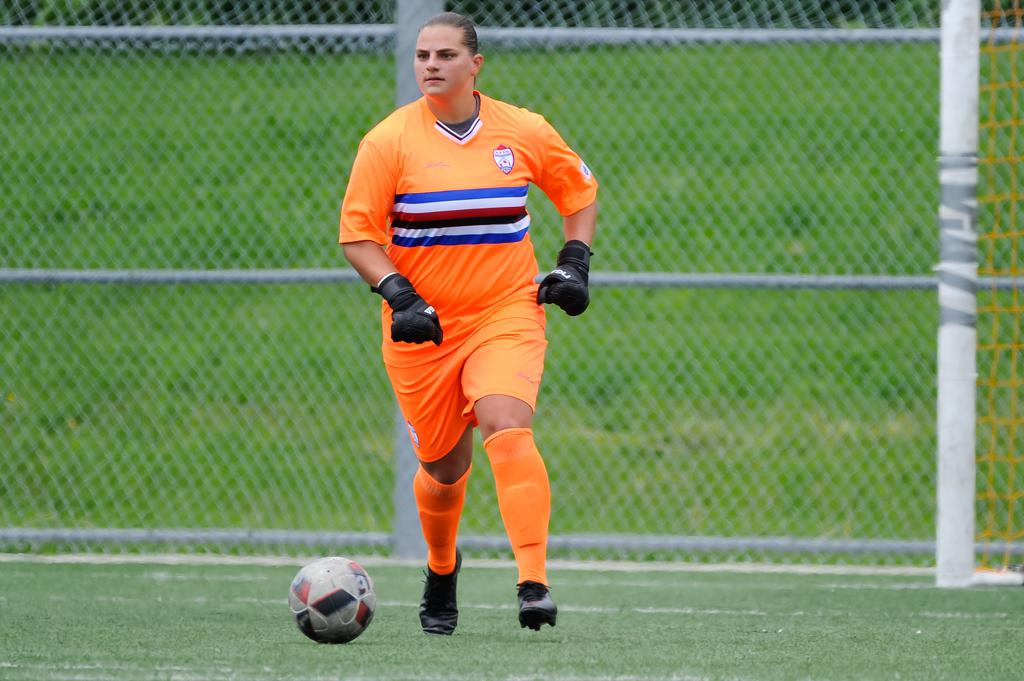 The first half of match was a tug-of-war for the ball with Woodbridge having a slight advantage. Woodbridge created more in the attacking third but struggled to unleash shots on net.

As the referee singled for half-time, the match remained scoreless as neither side were able to convert on their chances.

Woodbridge's Diamond Simpson (46') sneaked past the the defenders within seconds of the half to unleash a powerful shot to open the score. Oakville scrambled to seek the equalizer, upped their intensity and pressed high. The Blue Devils were very active in the final third in the closing minutes of the match but couldn't capitalize.

The Strikers' defence and keeper were solid and vital in keeping Oakville away from the scoreboard. Woodbridge's Vanessa Fiore made a few crucial saves, rightfully earning her clean sheet.

Seconds before the referee blew his whistle for full-time, Woodbridge's Kylee Bertrand cleared the ball from just near the goal-line to ensure her side the win.

The Woodbridge Strikers will now make their way to Oakville for the second leg of the Semi-Finals.

Woodbridge will defend their advantage on Sunday August 25th (4 p.m.) at Bronte Field as Oakville will seek to turn the result around with home field advantage. 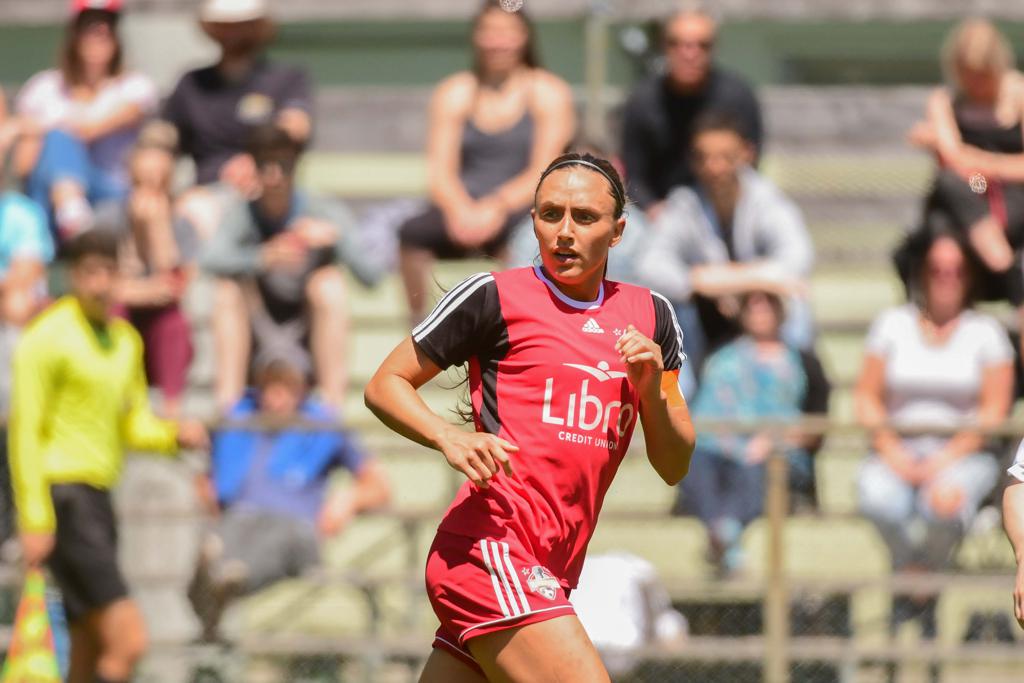 It was a seven-goal thriller in the 2019 League1 Ontario Women's Championship Semi-Final first leg between FC London and Vaughan SC, with London coming out the better of the two sides after a 4-3 result.

Jade Kovacevic (48’, 58’, 82’) was the standout player for the hosts, with a second half hat-trick to lead her side to a comeback victory.

Vaughan took an early two-goal lead with strikes from Yoanna Peralta (2') and Cassidy Brooks (12'), answered by a Kayla McQueen (23') goal before half-time.

Kovacevic took the spotlight from the start of the second half, scoring three goals  before Colleen Beesley pulled one back for the visitors in stoppage time (90' + 1').

The 4-3 scoreline leaves the tie wide open for next week’s second leg in Vaughan, where both sides will come face-to-face again for a spot in the 2019 playoff final.

Vaughan SC came into match full of energy and confidence, and scored in under two minutes after Peralta capitalized on a mistake by the FC London goalkeeper. The hosts looked to respond immediately through Oliveira, but she was fouled just outside the box on her way to goal. The ensuing free kick was well defended by Vaughan, who looked solid at the back for the majority of the first half.

The visitors doubled their lead in the 12th minute, when Cassidy Brooks put the ball through the keeper's legs from close range after a cross was redirected into her path from the back post. The play began with a great bit of skill by Jessie Faber who beat her defender and played an incisive pass to Beesley on the right wing, whose cross eventually found Brooks unmarked in the box.

Vaughan continued to pose a threat down both wings in the opening half hour, and looked very composed defending in their own half as well. They were able to play out of the back comfortably with quick passes and also get numbers in the opposition's box every time the ball was brought up the wings.

Jade Kovacevic was kept quiet in the first twenty minutes, and her first attempt at goal in the 22nd minute drifted wide of the right post. However, Vaughan gave the ball away off of the following goal kick and Chelsea Zavitz brought the score to 2-1. It then became an end-to-end game with chances for both sides: Kovacevic had another chance fly wide of the target in the 35th minute, and Faber also came close for Vaughan in the 44th.

The half-time break did nothing to interrupt the high tempo of the match.

Jade Kovacevic got the hosts' equalizer in the 48th. FC London had all the momentum as the crowd at the German Canadian Club got behind their team.

Kovacevic completed the home team’s comeback in the 58th minute, timing her run perfectly to get behind the Vaughan defenders and meet a brilliant pass by Nielsen. The finish was equally impressive, chipped calmly over the oncoming goalkeeper.

Vaughan struggled to regain their composure from the first half, and their frustration began to show as the players committed more fouls and made more rushed decisions.

Kovacevic saved her best for last, scoring an absolute rocket from outside the box in the 82nd minute and completing her hat-trick. FC London looked to have completed the ultimate playoff comeback, but a stoppage time goal by Beesley left a big question mark over the second leg as - if the result after second leg leaves the tie level on aggregate score - Vaughan's three away goals could give them a tiebreaker edge.

The two sides will meet again on August 25 for the semi-final second leg at North Maple Regional Park (7 p.m.).

The winner of this tie will face either Oakville Blue Devils or Woodbridge SC in the 2019 League1 Ontario Women's Championship Final.