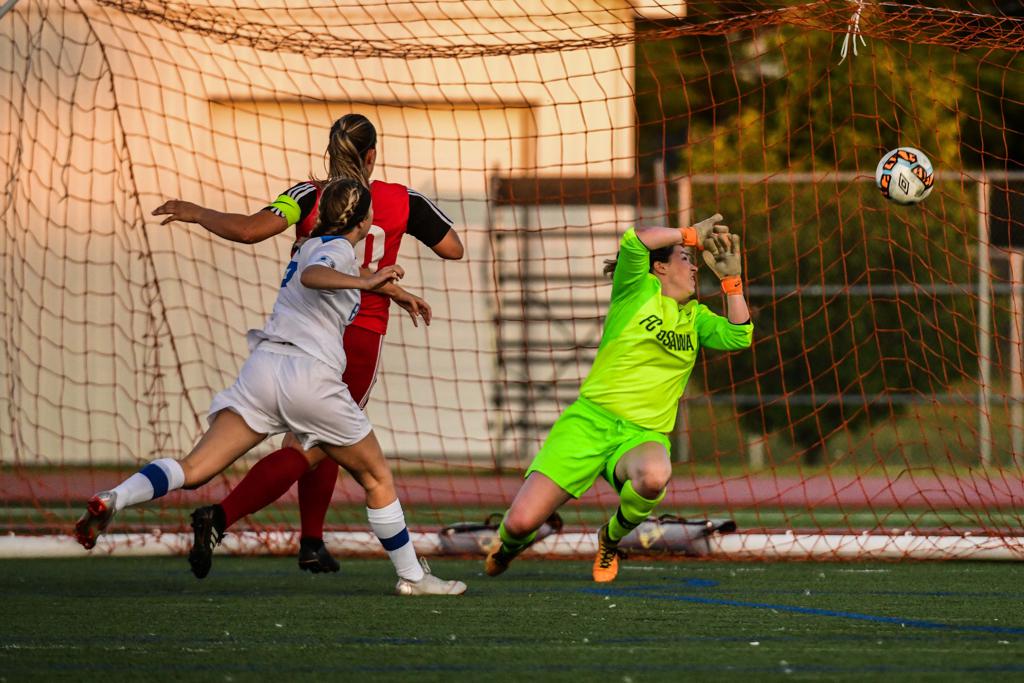 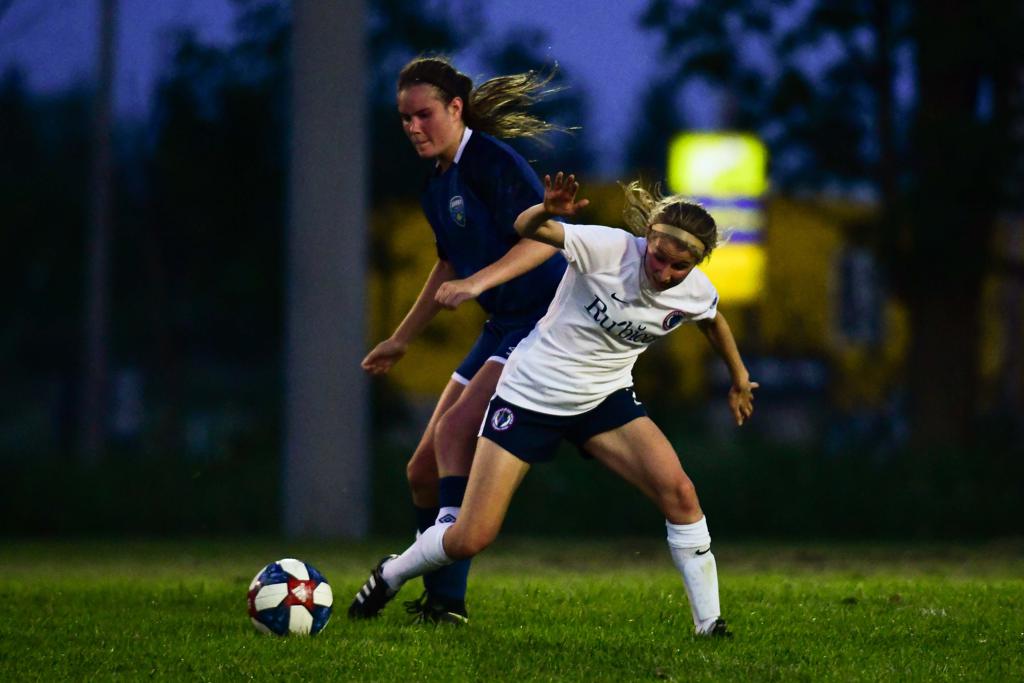 Vaughan, Oakville, Woodbridge and London all advanced to the Semi-Final stage of the women's #playoffs2019 - in pursuit of the 2019 League1 Ontario Women's Championship - after soundly beating their opposition over the two-leg competition.

Now all four sides will head into the two leg Semi-Final stage commencing the weekend of August 16-18. 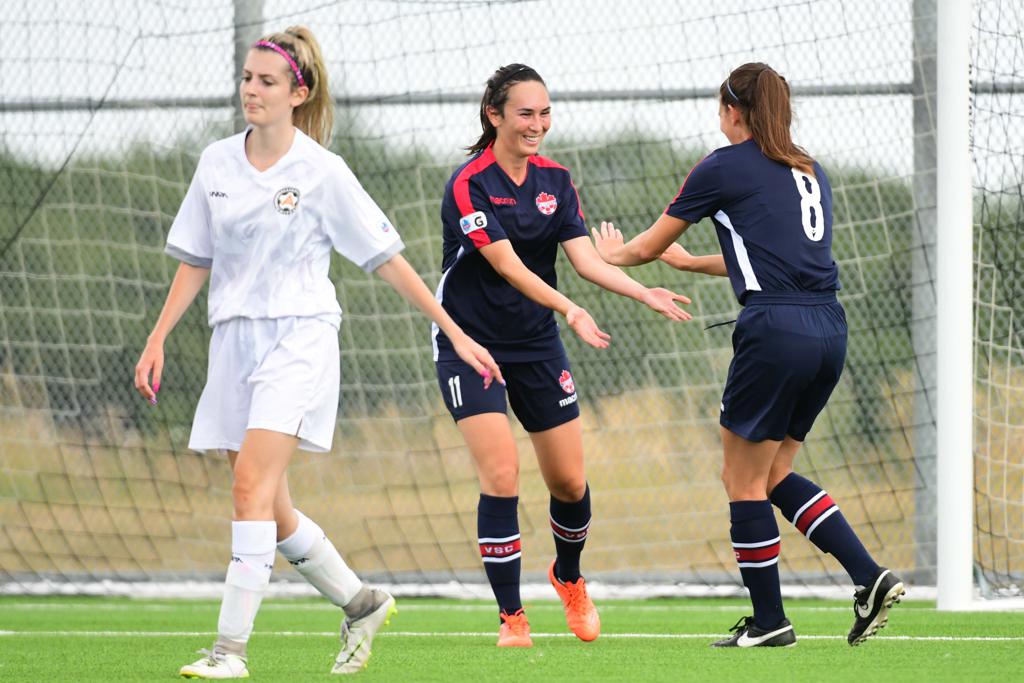 Vaughan Azzurri cruised to a 2-0 victory over Alliance United FC at Mount Joy on Sunday, finalizing their advancement into the semi-finals of the League1 Ontario women's playoffs.

After going up six goals in the first leg at home, Vaughan only had to prevent a catastrophic collapse to move on as Alliance had the biggest of hills to climb to mount a challenge.

The Azzurri started the game brightly as Elis Nemtsov attempted two shots within the first ten minutes. Alliance goalkeeper Emily Toth stopped the first, and the second was headed over the bar after Colleen Beesley crossed it into the box.

Alliance started to find their own chances after the half-hour mark. Jessica Friend drove up the right wing and fired a cross straight to Vaughan goalkeeper Courtney Davis. Meaghan Reynolds sailed a shot over the bar, and Jade Vyfhuis had her shot deflected to narrowly go out for a corner kick.

Kristen Parkes, hungry for goals to get Alliance back into the tie, was caught offside as the first half ended at 0-0.

With substitutions to spare, Vaughan made two half-time changes to introduce Catherine Umolac and Jessie Faber, who had already scored five goals in the first leg.

But it was Alliance who started the second term with momentum. Emily Andrus danced around her opponent with a nifty spin move, creating acres of space to attack into before the ball was turned over.

Alliance whipped another cross into the Vaughan box, but Parkes couldn't make solid contact with the ball as Davis stepped up to collect it.

Vaughan eventually snapped out of the hypnotic ball movement to open the scoring. Catching the Alliance defence flat-footed, the Azzurri cut the ball back into the box for Yoanna Peralta (68') to tap-in the first goal of the game.

Faber (79') smashed her shot from point-blank range to ripple of the back of the net, extending the aggregate lead to 8-0.

Vaughan continued to aim for goal before the end of the match. Substitute Vanessa Devellis fired a shot in the 84th minute, but Toth makes the huge diving save to keep the lead from stretching any further. As the final whistle blew and the sun set, Toth made six saves for the evening but Alliance bow out of the 2019 playoffs.

Meanwhile, Vaughan lives to see the sun rise for the semi-finals on yet another quiet but comfortable performance for the Azzurri goalkeepers. Davis did not have to make a save in the game, and Vaughan goalkeepers only needed to make one save throughout the series.

In their first season in the women's division, Alliance United FC hold their heads up high as they finish the year in seventh place, eliminated by an experienced Azzurri squad. Laura Gosse and the rest of the team will look to regroup for next year to build on their successes.

Second-seeded Vaughan move on to face third-seeded FC London in the semifinals, with the Oakville Blue Devils and Woodbridge Strikers facing off in the other semi-final battle between first and fourth place respectively. 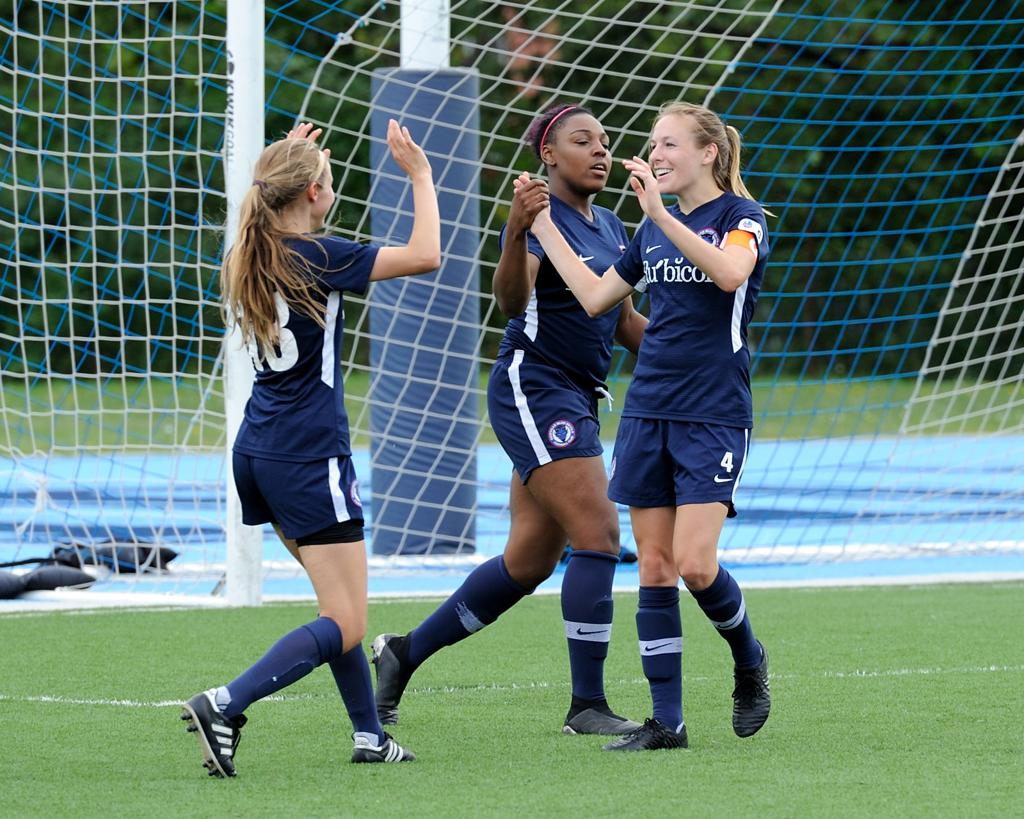 The Oakville Blue Devils put six goals past Darby FC to advance to the Semi-Finals of the League1 Ontario playoffs on a sunny afternoon at Sheridan College.

After winning the first leg by a scoreline of 2-0, Oakville showed no signs of letting up for the second 90 minutes, going up by three goals and totally dominating the first half.

The second half was much the same as Oakville followed up with another three goals to win the tie by a total of 8 goals to nil. Lauren Twidle scored herself a hat-trick (40', 49', 70') with Poveda (9'), Ali (15') and Wolever (68') adding one each. Goalkeeper Elisa Lapadula kept the clean sheet in goal.

Oakville now advances to the semi-final round of the playoffs where they will face off with Woodbridge Strikers in another home-and-away series. 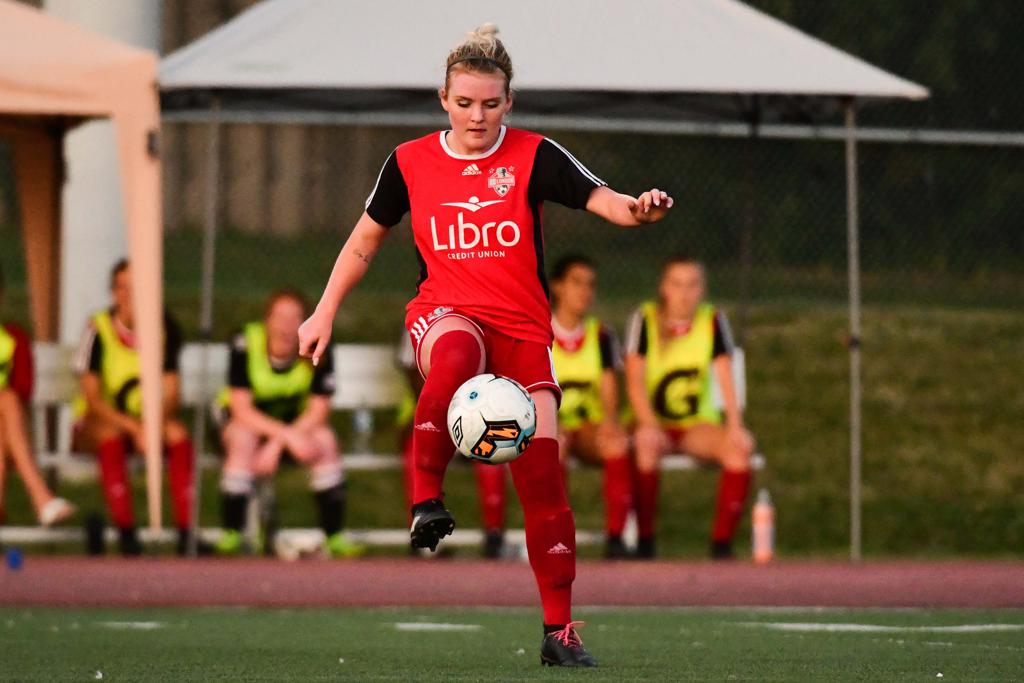 FC London defeated FC Oshawa 3-0 in the second leg of their quarter-final match-up to advance to the semi-finals of the League1 Ontario playoffs.

London headed into the the second leg of the quarter-finals with confidence, after managing to take a three goal advantage in Oshawa.

FC Oshawa came out strong-footed, knowing they had a long hill to climb for a comeback. In the opening minutes they pressured well defensively, forcing a few turnovers.

However, only eight minutes into the match London would have their first chance to open the score when Jade Kovacevic broke through the defensive line. Oshawa's Emily Gillet would go on to close out the offensive opportunity.

In the 23rd minute, London's Julia Benati would take her first shot on goal but once again Oshawa's Gillet would step up to save it.

Finally, London’s Marisa Oliveira (34') would open the score, tapping the ball into the net from a rebound, increasing London's aggregate score to 5-1. London's Oliveira would close out half-time by rattling the top bar after a close range attempt.

By half, Oshawa only had one shot attempt off-target and created one offensive threat moment sending London's defence and goalie scrambling in the 50th minute. Meanwhile London had four shots on-target.

In the second half, Oshawa would continue to play their heart out, seeking to pull a goal back but London were defensively solid.

London's Kovacevic (54') and Oliveira (63') would tally up the aggregate score to 7-1 and close out the match in the second half. 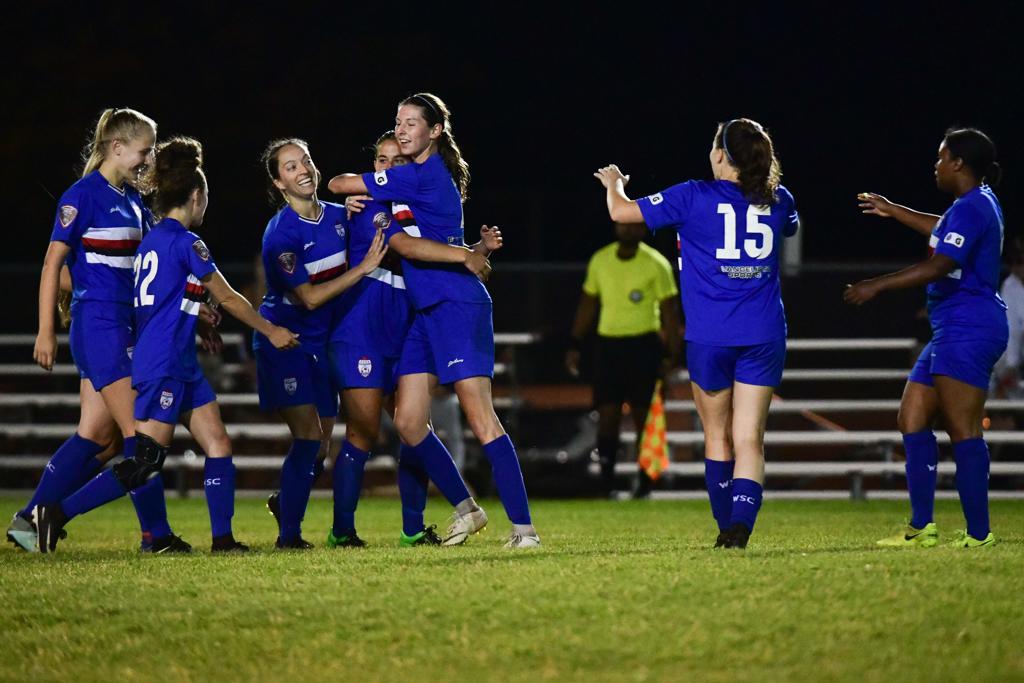 Woodbridge advance to the semi-finals with a 4-0 aggregate score after a late goal by Hart (86') giving them a 1-0 victory over OSU Force away from home.

It was a strong start to the game for Woodbridge, confidently playing the ball forward, yet OSU were able to hold them off, not allowing them to connect the final pass into the OSU box.

As time went on, OSU grew into the game, making several threatening counter-attacks through the wings, but could not get many clear shots on goal. They looked to absorb the pressure by Woodbridge, swiftly moving the ball forward whenever possible. One such counter-attack nearly gave them the opening goal in the 17th minute, with a great play down the wing lead to a low shot on target, but the Woodbridge goalkeeper was equal to it.

Despite having more possession of the ball, Woodbridge were mostly forced into taking shots from distance, which did not trouble the OSU goalkeeper. This scenario remained the case for the rest of the first half and the teams went into the break with the scoreline level. Woodbridge only needed to close out the second half to advance on aggregate.

The second half came, and OSU began to attack the ball with more numbers, chasing the 3-0 aggregate deficit. It was a very tough battle in midfield, with both teams looking for control of the game.

OSU pressed higher up on the Woodbridge defenders, trying to force errors, but Woodbridge were able to move the ball around confidently.

At the 68th minute, OSU came very close to the opening goal, when a deflection off a corner put the ball into the post and out of play. Play continued back and forth, with both teams looking to be equal, but not quite able to create many clear opportunities on goal.

As time went on, Woodbridge started to play more comfortably, looking to finish off the tie, while OSU were desperately getting players forward in attack.

At the 86th minute, Woodbridge exploited OSU’s commitment to attack, with a well executed counter attack putting Hart through on goal, and she made no mistake with a clean finish at the far post.

Woodbridge took a 4-0 aggregate lead with the goal, and were able to finish off the final minutes of the game to advance to the semi-finals.

They will next face Oakville Blue Devils in the semi-final stage of the League1 play-offs.