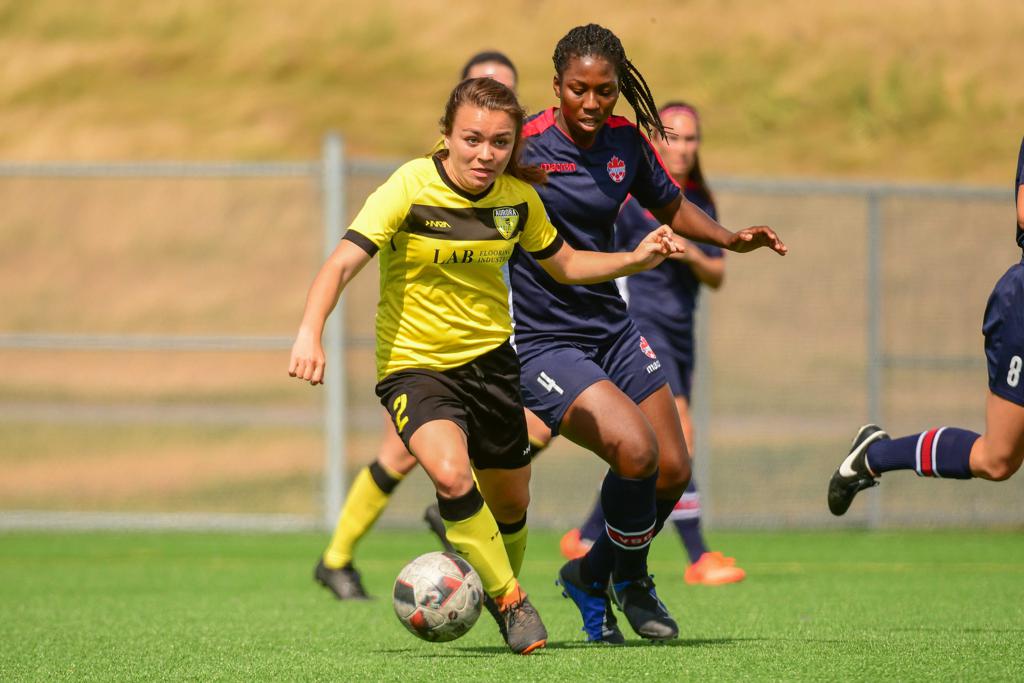 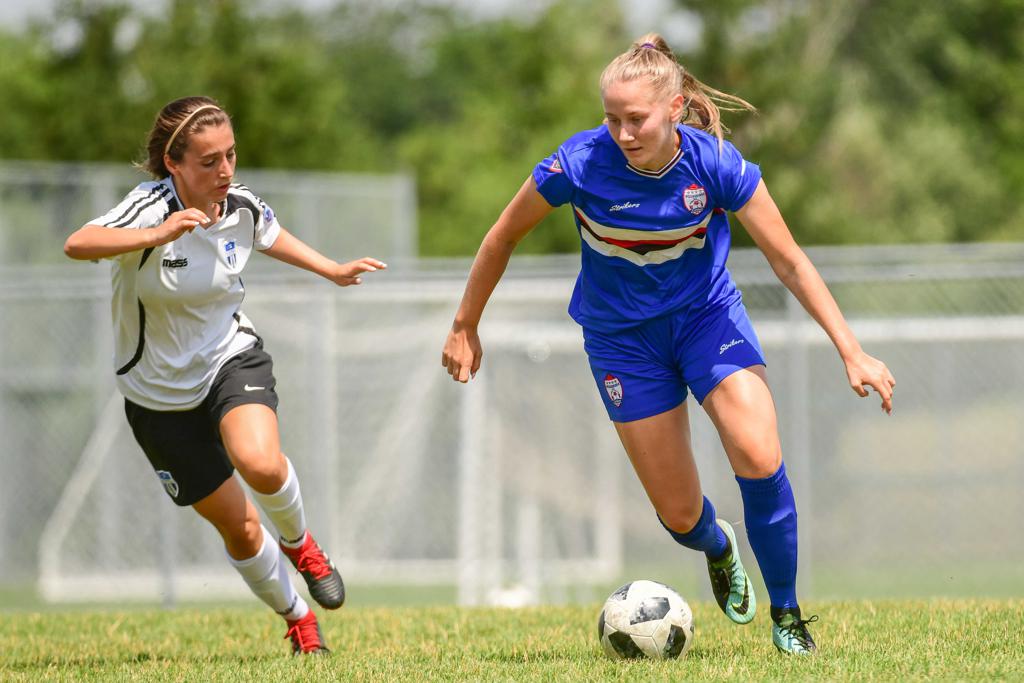 Vaughan, Oakville, Woodbridge and London key up for playoffs with big wins in Matchweek 13 - the final weekend of the 2019 League1 women's season. 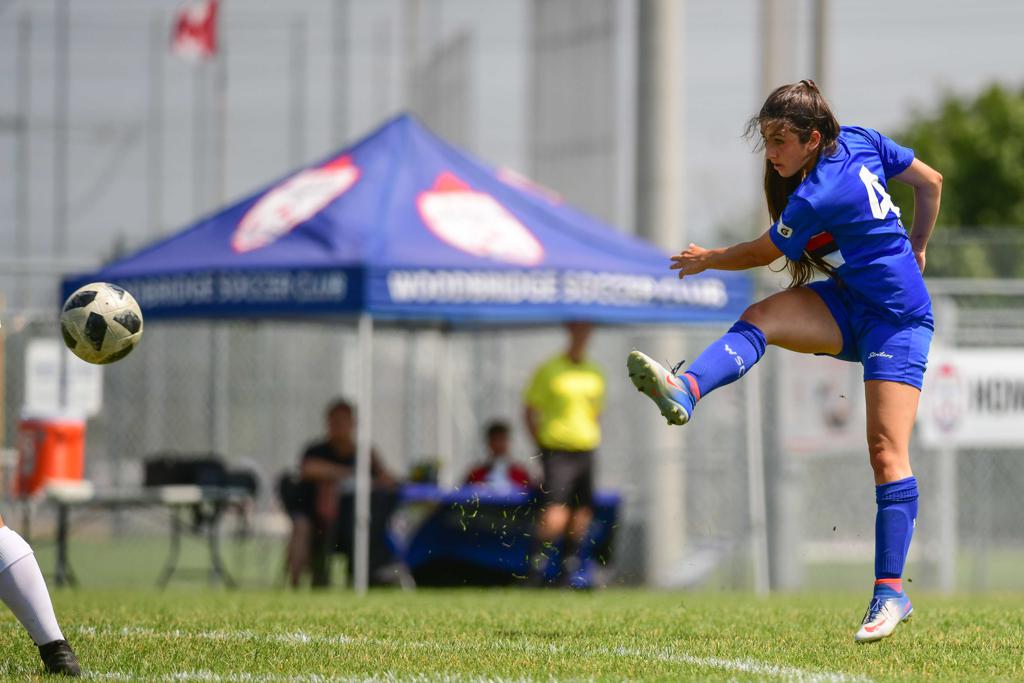 Woodbridge Strikers women leapfrogged over Ottawa South United in the final standings after a 6-0 victory at Vaughan Grove on Sunday.

Woodbridge opened the scoring with two quick goals in succession. Tolnai slid her shot into the corner out of Margot Shore's reach, and Lauren Hart (16') powered her shot home to ripple the back of the net and make it 2-0.

Tolnai knocked in a bouncing cross, making it 3-0 for the home side going into the half-time break.

The Strikers continued to ride the momentum into the final 45 minutes. Mirroring the placement of her first goal, Tolnai hit the ball into the bottom left corner for her hat-trick. She hit the opposite corner in the top right only moments later to make it 5-0.

Kennedi Herrmann (66') put the game to rest after finishing a cross from Ida Miceli.

Ottawa goalkeeper Margot Shore got on a hand on the ball, but it was not enough to stop the shot, ending the game at 6-0.

Shore stepped up throughout the game to make some key saves, including a breakaway shutdown in the 52nd minute when she stuck out her leg to deflect Ida Miceli's shot. Shore ended the day with seven saves.

Woodbridge goalkeeper Zeeyana Jivraj and the Woodbridge defence earned a comfortable clean sheet as Ottawa South United were unable to attempt a shot all game.

Ottawa South United (6-5-2) finish in a three-way tie for fifth place with 20 points, but will claim the fifth seed after the tiebreakers. Their regular season with a +5-goal differential (30 GF, 25 GA). 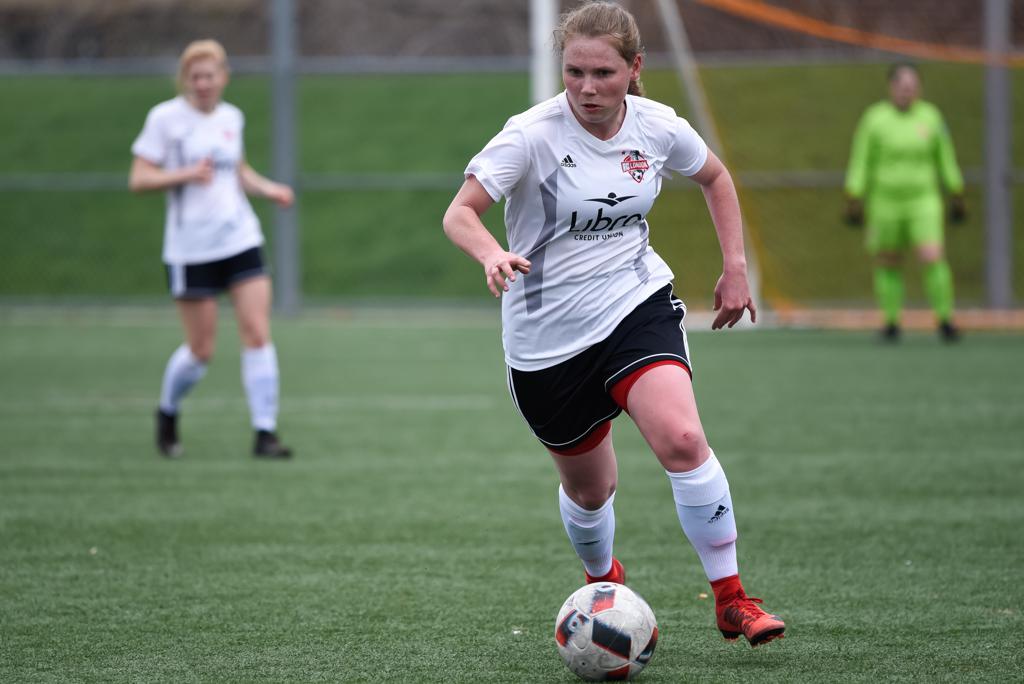 London finished the season in "Seventh Heaven" this past weekend, registering a comprehensive 7-1 win over Alliance at Cove Road on Sunday afternoon.

The first half saw five finely executed goals without reply for the home side. First to draw blood was Jade Kovacevic. The quick, strong League1 top scorer created several headaches for the visitors whenever she had the ball at her feet in this encounter.

Kovacevic (11') found space to shoot from close range after a sharp run into the box from the right wing. Although her initial shot was saved superbly by Turyk, it was only parried across goal. Jade wisely followed in on the loose ball for an unmissable tap-in in front of a gaping goal.

Two more goals in quick succession followed the opener, courtesy of McQueen (14') and Nielsen (16'). It looked like an afternoon of plain sailing for the ladies from the Forest City with the 3-0 scoreline in their favour.

But London were not content to rest on their early lead. Kovacevic hit the post from a left-sided effort before Alliance then had a chance to grow into the game a little more - the away side threatening to join the score-sheet.

Alliance had several chances throughout the match, most of their shots on-target, but nothing with any real spice or enough potency to trouble Gillet between the sticks for FC London.

Two more London goals then arrived before the end of the first half to put the game beyond any doubt. Kovacevic (25') doubled her contribution on the afternoon to end the regular season with the Golden Boot and a total of 21 goals.

Oliveira (32') also added her name to the list, stealing possession in the attacking third to prevent an Alliance counter-attack. A quick and clever one-two helped her in behind the orange-shirted back-line for a one-on-one with Turyk. Oliveira calmly tucked the ball neatly, low inside the near left post.

In the opening moments of the second half, Alliance won a corner which led to an incident in the penalty box where a spot-kick was subsequently awarded. Mackay (47') stepped up for the visitors and fired her penalty confidently down the middle as Gillet dived to her right. The goal for Alliance only ever really looked like being a consolation, however.

London continued to press and eventually restored their five goal advantage through substitute Madilyne Michienzi (68'). She fired a shot across Turyk from the right of goal, but the Alliance shot-stopper could only get her fingertips to the ball on its way into the net.

Just 12 minutes later, the dark-horse winner of player-of-the-game, Michienzi, sealed her brace, despite only amassing 30 minutes of play.

Struck from a relatively similar position to her previous goal - and also played across the keeper - her second was craftily received from Kovacevic, who played a very intelligent ball forwards to Michienzi's right side in order to pull her away from the defender on her left. This provided Michienzi just enough space to cap-off a fantastic afternoon for the women in white.

The win sees London finish third in the women's division and poised to take on sixth place side, FC Oshawa, in two-leg Quarter-Final match-up. 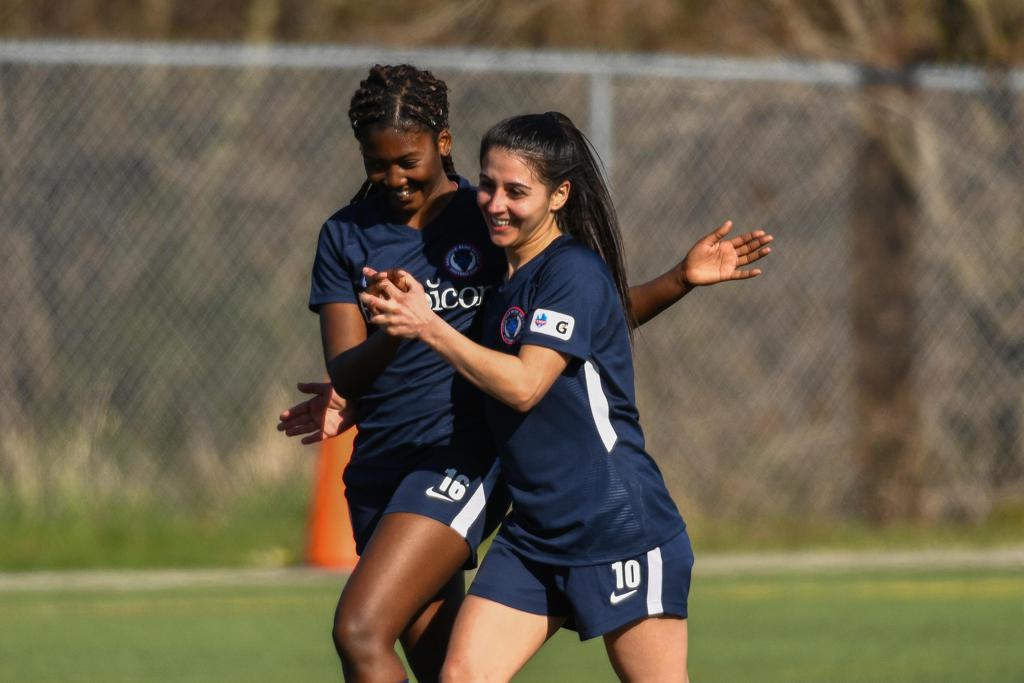 Darby FC's Selah Hopkins (18') scored the first goal of the match but Sarah Stratigakis (32', 45' + 1') bagged a brace and provided an assist for Mahira Ali as Oakville Blue Devils earned a 3-1 win and finished the regular season at the top of the League1 Ontario podium.

The first half was balanced and both sides created chances but it was Darby FC who found the net first. On 18 minutes, Alexis Wilson sent a long ball over the top for Selah Hopkins, who lobbed it over the onrushing Oakville Blue Devils keeper Rachel Yerxa and into the back of the net from the edge of the box.

Darby FC keeper Mollie Eriksson parried a furious angled drive from Roselyn Kyeame and Mahira Ali hit the underside of the crossbar with a follow-up effort, though the Egyptian was in an offside position.

At 29 minutes it was another duel between Hopkins and Yerxa, and this time the Oakville Blue Devils keeper came tearing out and denied the Darby attacker's shot at the edge of the box.

Sarah Stratigakis levelled it up in 32 minutes with a low finish from six yards and then in the first minute of the five minutes of the first half stoppage time, she again beat Eriksson from close range with a precise shot after an Ali cross.

The hosts could have scored more before the end of the first forty-five minutes, but Eriksson twice denied their long-range efforts.

Eight minutes after the restart, Oakville extended their lead to two goals when Stratigakis pulled back for Ali's shot from six yards.

Just a minute later, Darby's half-time substitute, Lauren Illman, was brought down at the edge of the box by Oakville keeper Yerxa in a one-on-one situation. The result was a free-kick for Darby and a yellow for the keeper.

Oakville dominated the last 30 minutes of the game and created few real goal-scoring chances; Stratigakis' low strike in an almost one-on-one situation went wide; Wolever rolled across for Ali and she sent it into the sky from point-blank range, and Maila Carboni, just seconds after coming off the bench, tried an angled drive that was saved by Eriksson.

With this result, Oakville Blue Devils finished the regular season at the top of the table and Darby FC took up the last spot of the eight-team playoff zone - so, in the first round of the playoffs, the two sides will face each other once again. 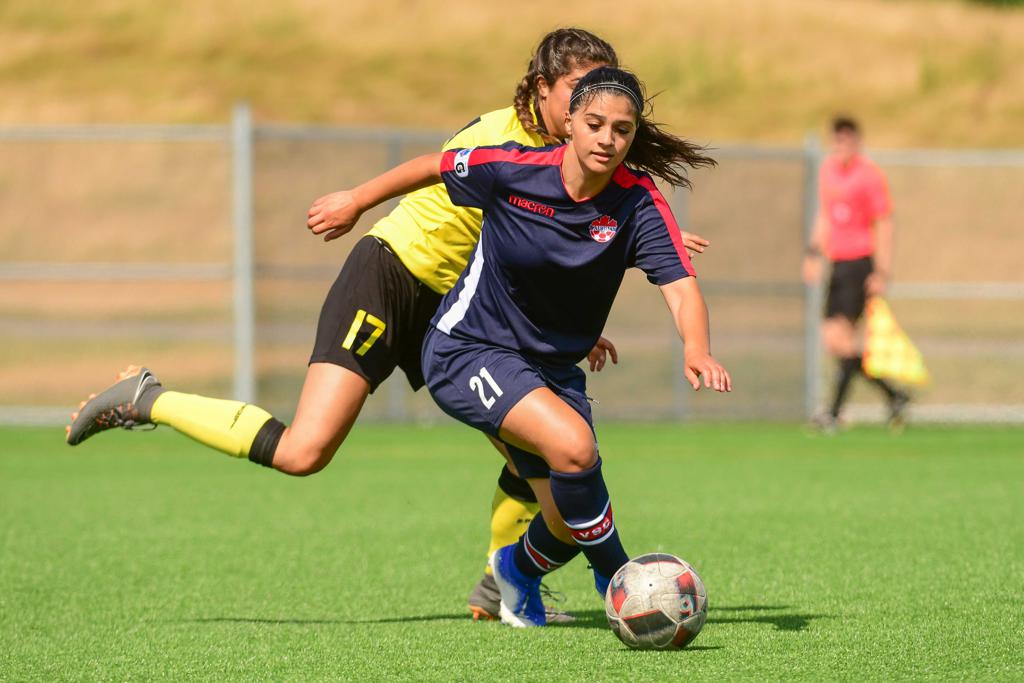 Aurora had nothing to lose heading into this match, already having been disqualified from the post-season playoffs.

Teams shared possession in the first half, but Vaughan were the side with eight chances, four of which were on target.

Aurora, on the other hand, struggled to execute in the attacking third, with no shots on target all game and three shots off target.

Aurora goalkeeper Meaghan Phillips kept the game level heading into the half, coming quickly off her line to make key tackles and fantastic one-handed saves.

Vaughan put on a lot of pressure in the second half with six shots on target, and seven off target. The score line opened up when Vaughan's Courtney Douglas (53') put away the rebound in the early moments of the second half.

Vaughan's Faber (65', 76') would get two, with her first goal being struck from distance, slotting right under the crossbar.

Vaughan end their regular season with a 10-2-1 record, and will play Alliance United over the August long weekend for the first leg of a home and away series. Click here to see all stats on the Azzurri.

Aurora FC end their regular season with a 1-10-2 record after a very hard fought season from the young squad. Click here to see all stats on Aurora FC.